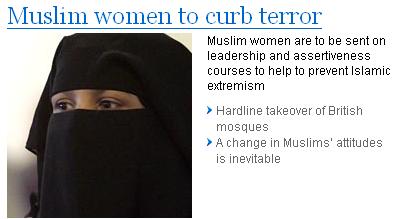 
Marie Woolf, Whitehall Editor - MUSLIM women are to be sent on leadership and assertiveness courses to help to prevent Islamic extremism.
In an attempt to stop young Muslims being seduced by Al-Qaeda, women will be sent on training courses designed for FTSE 100 managers to give them the skills and confidence to confront fanatics.
Amid fears that extremists are becoming more sophisticated in their recruitment, Hazel Blears, the communities secretary, has concluded that a key way to stop extremist ideas further permeating Muslim communities is to give “the silent majority” a stronger voice.
She is to publish a good practice guidance document which will say that “resilient communities can only exist where women are playing a full and active part”.

Blears will tell local authorities to use part of a £70m government fund set up to combat extremism to pay for the courses in confidence building, communication and mediation skills.
Muslim women will be offered work placements with business leaders and top athletes to imbue assertiveness and leadership and help them to advance their careers. Funding will be available to set up local Muslim women’s groups to provide a “safe space” where they can discuss their concerns. The plan is likely to attract criticism from some Muslim men who will see it as a threat to cultural traditions about the role of women in society.
Blears believes that Muslim women have “untapped potential” to become a voice of moderation in communities targeted by fanatics. Half of all Muslim women have never worked and the government believes that improving their educational and job prospects will boost their influence.
A Whitehall source said: “Muslim women can have a unique moral authority at the heart of families as sisters, mothers and friends and must be supported to play a greater role in tackling extremist ideology.”
The plans have already provoked a mixed response among Muslims. The Muslim Council of Britain accused the government of trying to turn women into government spies. “The government at first wanted our imams to act as spies on young British Muslims and now they seem to want Muslim women to do the same,” said Inayat Bunglawala, the council’s assistant secretary-general.
Shaista Gohir, chief executive of the Muslim Women’s Network, said: “It’s not about Muslim women becoming investigators, it’s about giving them a greater role in Muslim public life.”
Professional motivational firms will run role-play courses in which Muslim women will learn how to confront fanatics. Some of the courses will be run by actors who are expected to pose as radicals espousing violent jihadist arguments, whom the women will be taught to challenge effectively. Mothers will also be offered confidence-building courses to help them speak out if they see their children being wooed by extremist preachers.
The courses will help young women to have the confidence to challenge young radical men in debate.
The Home Office estimates between 10,000 and 15,000 British Muslims support Al-Qaeda or other terrorist groups. The document, to be published this month, will express concern that extremists are targeting young people aged between 16 and 35.
“Extremists’ operation methods and use of technology are becoming ever more sophisticated. They are exploiting ungoverned spaces such as the internet, bookshops and cafes and using new media to put across slick and seductive messages,” a draft of the paper says.
“This is about giving the silent majority a stronger voice in their communities and equipping people with the skills and strength to withstand the messages of extremists preaching division and hatred.”
Muslims have three times the unemployment rate of the general population, with more than half economically inactive.
Additional reporting: Abul Taher
- source
----
September 7, 2007
Hardline takeover of British mosques

Riyadh Ul Haq gets into a waiting car outside of the Al Kawthar Academy
Andrew Norfolk - Almost half of Britain’s mosques are under the control of a hardline Islamic sect whose leading preacher loathes Western values and has called on Muslims to “shed blood” for Allah, an investigation by The Times has found.
Riyadh ul Haq, who supports armed jihad and preaches contempt for Jews, Christians and Hindus, is in line to become the spiritual leader of the Deobandi sect in Britain. The ultra-conservative movement, which gave birth to the Taleban in Afghanistan, now runs more than 600 of Britain’s 1,350 mosques, according to a police report seen by The Times.
The Times investigation casts serious doubts on government statements that foreign preachers are to blame for spreading the creed of radical Islam in Britain’s mosques and its policy of enouraging the recruitment of more “home-grown” preachers.
Mr ul Haq, 36, was educated and trained at an Islamic seminary in Britain and is part of a new generation of British imams who share a similar radical agenda. He heaps scorn on any Muslims who say they are “proud to be British” and argues that friendship with a Jew or a Christian makes “a mockery of Allah’s religion”.

Seventeen of Britain’s 26 Islamic seminaries are run by Deobandis and they produce 80 per cent of home-trained Muslim clerics. Many had their studies funded by local education authority grants. The sect, which has significant representation on the Muslim Council of Britain, is at its strongest in the towns and cities of the Midlands and northern England.
Figures supplied to The Times by the Lancashire Council of Mosques reveal that 59 of the 75 mosques in five towns – Blackburn, Bolton, Preston, Oldham and Burnley – are Deobandi-run.
It is not suggested that all British Muslims who worship at Deobandi mosques subscribe to the isolationist message preached by Mr ul Haq, and he himself suggests Muslims should only “shed blood” overseas.
But while some Deobandi preachers have a more cohesive approach to interfaith relations, Islamic theologians say that such bridge-building efforts do not represent mainstream Deobandi thinking in Britain.
The Times has gained access to numerous talks and sermons delivered in recent years by Mr ul Haq and other graduates of Britain’s most influential Deobandi seminary near Bury, Greater Manchester.
Intended for a Muslim-only audience, they reveal a deep-rooted hatred of Western society, admiration for the Taleban and a passionate zeal for martyrdom “in the way of Allah”.
The seminary outlaws art, television, music and chess, demands “entire concealment” for women and views football as “a cancer that has infected our youth”.
Mahmood Chandia, a Bury graduate who is now a university lecturer, claims in one sermon that music is a way in which Jews spread “the Satanic web” to corrupt young Muslims.
“Nearly every university in England has a department which is called the music department, and in others, where the Satanic influence is more, they call it the Royal College of Music,” he says.
Another former Bury student, Bradford-based Sheikh Ahmed Ali, hails the 9/11 attacks on America because they acted as a wake-up call to young Muslims. This, he says, taught them that they will “never be accepted” in Britain and has led them to “return to Islam: sisters are wearing hijab . . . the lion is waking up”.
Mr ul Haq, the most high-profile of the new generation of Deobandis, runs an Islamic academy in Leicester and is the former imam at the Birmingham Central Mosque. Revered by many young Muslims, he draws on his extensive knowledge of the Koran and the life and sayings of the prophet Muhammed to justify his hostility to the kuffar, or non-Muslims.
One sermon warns believers to protect their faith by distancing themselves from the “evil influence” of their non-Muslim British neighbours.
“We are in a very dangerous position here. We live amongst the kuffar, we work with them, we associate with them, we mix with them and we begin to pick up their habits.”
In another talk, delivered a few weeks before 9/11, he praises Muslims who have gained martyrdom in battle and laments that today “no one dare utter the J word”. “The J word has become taboo . .. The J word is jihad in the way of Allah.”
The Times has made repeated attempts to get Mr ul Haq to comment on the content of his sermons. However, he declined to respond.
A commentator on religious radicalism in Pakistan, where Deobandis wield significant political influence, told The Times that “blind ignorance” on the part of the Government in Britain had allowed the Deobandis to become the dominant voice of Islam in Britain’s mosques.
Khaled Ahmed said: “The UK has been ruined by the puritanism of the Deobandis. You’ve allowed the takeover of the mosques. You can’t run multiculturalism like that, because that’s a way of destroying yourself. In Britain, the Deobandi message has become even more extreme than it is in Pakistan. It’s mind-boggling.”
In some mosques the sect has wrested control from followers of the more moderate majority, the Barelwi movement.
A spokesman for the Department for Communities said: “We have a detailed strategy to ensure imams properly represent and connect with mainstream moderate opinion and promote shared values like tolerance and respect for the rule of law. We have never said the challenge from extremism is simply restricted to those coming from overseas.”
- source
----
January 4, 2008
A change in Muslims’ attitudes is inevitable
Inayat Bunglawala: Commentary - Helping your children to find good marriage partners and to settle down and build stable family units is regarded in Islam as one of the most important duties of Muslim parents, and indeed all parents.
In recent years, though, there have been a number of cases where young women say that they have been coerced to marry someone when they did not wish to do so. Often it is seen by some family members as a mechanism by which additional members of an extended family can be brought into the UK.
It is crucial, however, that we are able to distinguish between forced marriages and the common practice of assisted marriages, whereby parents help their children to find a life partner but where the final decision is made by the young people themselves.
As many young Muslims will avoid mixing in pubs and nightclubs for religious reasons, their social circle may be small. Their parents should be able to help to introduce them to a wider circle through their own friends and acquaintances.

As good marriages are meant to symbolise the coming together of two families and not just two individuals, the parents’ concern should be perfectly understandable.
Still, some change in attitudes and mores among Muslims living in the West is inevitable. In the United States, for example, one of the most popular events at the huge annual convention of the Islamic Society of North America has been the “matrimonial banquet” where young men and women meet and speak with each other at a table for seven minutes before being rotated to meet other potential partners.
Clearly modelled on speed-dating events – although the organisers dare not call it that – even here parents often tag along partially at least to influence their children’s choice of marriage partner.
In the UK, leading Islamic organisations have made it clear that the Nikah (Islamic marriage) ceremony is effected quite simply by the two essential components of offer and acceptance. If a marriage offer is accepted without the free consent of either party then it is regarded as null and void. So it is important that forced marriages are not seen as a religious problem – this is a global human rights issue.
One of the best ways to eradicate this criminal practice is by education of young women with the emphasis on prevention.
Forced marriages are by no means peculiar to Muslim families. The Government’s Forced Marriages Unit say that they deal with 300 cases per year involving people from a number of countries and faith backgrounds.
Inayat Bunglawala is assistant secretary-general of the Muslim Council of Britain
- source