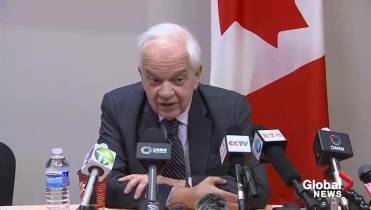 In a news conference with Chinese-language journalists in Markham, Ont., Tuesday — the national media were not invited and indeed only heard about it the following day — John McCallum delivered himself of the view that Meng Wanzhou, the Huawei executive arrested in Vancouver Dec. 1, could make “strong arguments” against her extradition to the United States.

Indeed, the ambassador proceeded to make them for her: that Donald Trump’s public statements on the case, to the effect that he might intervene in some way if it were necessary to resolve the trade dispute with China, indicated “political involvement”; that the case had an “extraterritorial aspect,” in as much as Skycom, the Huawei subsidiary whose ties to the parent corporation she is accused of concealing, is based in Hong Kong; and that the charges against her were related to a U.S. policy of sanctions against Iran that “Canada does not sign onto,” making her ineligible for extradition.

Each of these points is debatable, at best. The investigation into her was launched, not by Trump, but by the U.S. Justice Department, whose officials publicly contradicted his attempt to link it to trade issues. The location of Skycom’s headquarters is not necessarily germane to whether she committed a crime under U.S. law. And the charge against her is not sanctions-busting, but bank fraud — which is as much a crime in Canada as the U.S.

But these are, as the ambassador himself was good enough to say, for a Canadian court to decide (“the government cannot change these things… it’s purely a judicial process”). That being so, however, why on earth would he take it upon himself, as a representative of the government of Canada, to comment publicly on it? There’s a reason why ministers are supposed to decline to comment on matters that are before the courts: so that there can be no possible hint of political involvement in matters that are properly the subject of an independent judiciary.

This was, after all, the point that the government has insisted upon throughout this affair: that judicial decisions in Canada are based on the rule of law, not the desires of its rulers. At one stroke, the ambassador has now put that in doubt. He has, in so doing, echoed the very arguments China has been making, that Meng’s arrest was an abuse of the extradition process, thus impugning the actions not only of the Canadian police who carried out the arrest but also our closest ally, the United States, who requested it.

As a former minister in and representative of the government of Canada, having just debriefed cabinet on the case, he will be seen not merely to be commenting on the interesting legal issues it raises. He will be seen to be indicating a preference, reinforced by his comment at the same news conference that Meng’s extradition, should that be the result, “would not be a happy outcome.”

To offer such an opinion in public would be remarkable at the best of times. But to do so at the very moment China is holding three Canadians hostage — one of them facing a threat of death — gives the appearance of caving under pressure. The countries that have answered our pleas to intervene on our behalf, at some risk to their own relations with China, will have taken note. The response from a previous ambassador to China, David Mulroney, posted on Twitter, was pithy: McCallum’s comments were, he said, “almost impossible to understand.”

Is it conceivable that the ambassador could have been freelancing on such a sensitive issue, taking a position at odds with the government he serves? If so, he should be dismissed at once. If, on the other hand, he really is speaking for the government of Canada — the prime minister dodged reporters’ repeated questions on the matter Wednesday — then his statements are even more concerning. It is understandable that the government would not wish to unnecessarily antagonize the Chinese government, with at least one Canadian life in the balance. But this goes much further than that.

We may suppose the judge in Meng’s extradition case, assuming the U.S. proceeds with it, would not be influenced by the publicly expressed views of the government of Canada — though it will be open now for some to speculate that was the case, should he or she find in Meng’s favour. But perhaps the ambassador was intending to signal how the minister of justice, who has the final say in any extradition case, might rule.

Andrew Coyne: Ex-Liberal candidate’s only crime was engaging in ethnic politics — out loud