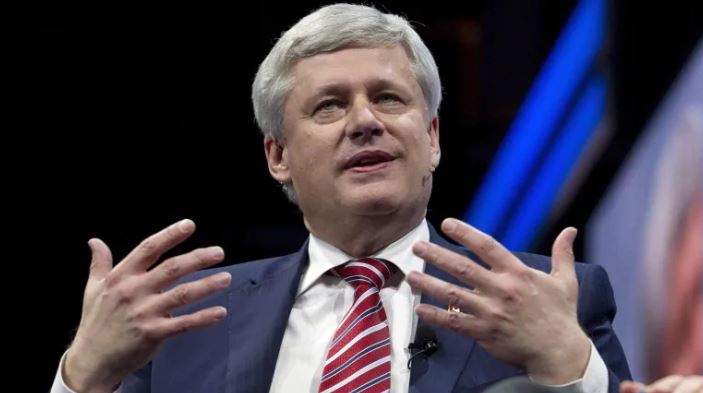 Former prime minister Stephen Harper says peace in the Middle East will only come if there is regime change in Iran.

Speaking at an international conference on global challenges in New Delhi Tuesday, Harper said he does not believe Iran would have deliberately shot down an aircraft, but the fact the government knew such a thing could happen yet still allowed normal civilian traffic "tells you something about the nature of that regime and its priorities."

"I do believe we need to see a change in Iran if we are going to see peace in the Middle East," he told the international audience at the Raisina Dialogue.

"I see an increasing number of states in the region — Israel, that I'm close to, certainly the Sunni Arab monarchies, others who are increasingly trying to work together and see a common future and common interests, and you have this one actor that quite frankly is … based on religious fanaticism and regional imperialism, and as I say as a friend of the Jewish people, frankly an anti-Semitic state."

Iranian leaders said Saturday that Iran's Revolutionary Guard shot down the Ukraine International Airlines Boeing 737-800 using surface-to-air missiles, killing all 176 passengers and crew on board. Of those passengers, 138 were destined for Canada, but it's not known how many were permanent residents or were travelling on visitor or student visas.

Foreign Affairs Minister François-Philippe Champagne has confirmed that 57 of the victims were Canadian citizens.

Harper called that a "tremendous loss of life" that has drawn great sorrow but is also the subject of great anger in Canada. He suggested incident could provoke change that could have positive impact for the region.

"If somehow … there [were] any way through the protests in Iran or the consequences of this that Iran could go on a better trajectory, I think that would be very core to resolving the problems of the Middle East," he said. "Certainly not resolve them all overnight, but I think without a change in the nature of the government of Tehran, the Middle East will continue to be in turmoil."

'Gulags Weren't That Bad': Sanders Staffer Says Trump Supporters Will Need To Be 'Re-Educated In Camps'