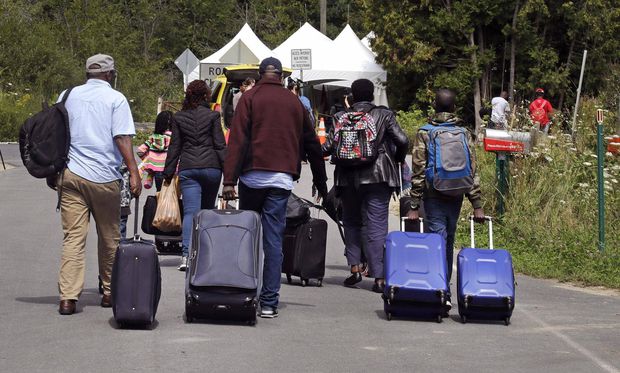 More than 12,000 asylum seekers have crossed into Canada at a single unofficial crossing point along the Quebec-United States border this year, surpassing the province's expectations for all of 2017.

Read more: How Canada has been secretly giving asylum to gay people in Chechnya fleeing persecution

"This is a recipe for a continued and prolonged debate about what to do when people show up at the Canadian border and ask for asylum."

The influx in unauthorized crossings at unmonitored parts of the border began last winter in Manitoba and Quebec, when hundreds of asylum seekers braved bitterly cold temperatures to seek refuge. By July, 7,500 had entered this way across Canada; 6,500 of those crossed in Quebec. That number for the province nearly doubled to 12,000 over the past month, surpassing the total number of asylum seekers Quebec Immigration Minister Kathleen Weil was expecting for the whole year. August figures for other parts of Canada were not available as of Thursday.

Most of those coming to Quebec have crossed at Saint-Bernard-de-Lacolle, which is along the border with New York State, according to Public Safety Minister Ralph Goodale's office. Another 1,100 people crossed outside of Quebec by July.

Between 80 per cent and 85 per cent of those who crossed at Lacolle are Haitians who fear being expelled under the Trump administration's decision to end a program in January, 2018, that granted them temporary protected status (TPS) after the massive 2010 earthquake in the impoverished Caribbean country. Thousands of panicked Haitians headed north to Quebec after misinformation on social media suggested Canada would accept them as refugees.

Protected status in the United States is set to expire over the next year for citizens from nine other countries: El Salvador, Honduras, Nepal, Nicaragua, Somalia, Sudan, South Sudan, Syria and Yemen. There is concern that Central Americans will be the next group of asylum seekers to flood the Canadian border as a result. The Congressional Research Service estimates that 195,000 Salvadorans, 57,000 Hondurans and 2,550 Nicaraguans live in the United States under TPS.

In an effort to deter them from heading north, Liberal MP Pablo Rodriguez travelled to Los Angeles last week to make the rounds with media and local officials, members of the Latino community and the Honduran, Salvadoran and Nicaraguan consul-generals. Mr. Rodriguez, born in Argentina, conducted most of his meetings in Spanish. He said he was able to correct some of the myths circulating in Spanish-language media.

"The story we heard most often from these individuals was that they had heard that Canada had a special program for those who might lose their TPS status," Mr. Rodriguez said. "We went to great lengths to ensure that these individuals understood that no such program existed and that, in order to immigrate to Canada, the proper rules and processes had to be followed."

Angela Ventura of the El Salvador Association of Windsor said she has seen a significant increase in the number of recent calls and e-mails from Salvadorans in the United States inquiring about asylum in Canada.

"If somebody asks for an inquiry about Canada, I will say that it's not wise just to cross the border the way [Haitians] are crossing right now, because it's risky. Maybe their [asylum] cases aren't strong enough."

In response to the recent surge in asylum seekers, Ottawa provided additional processing resources in Quebec and established a new federal-provincial task force, chaired by Transport Minister Marc Garneau, on the matter. The government is also using its social-media channels, including those of its consulates in the United States, to set the record straight about Canada's immigration policies.

Thirteen Canadians have been detained in China since Huawei executive’s arrest, says Ottawa

Thirteen Canadians have been detained in China since Huawei executive’s arrest, says Ottawa

Some Syrian White Helmets resettle in Canada, with more on the way