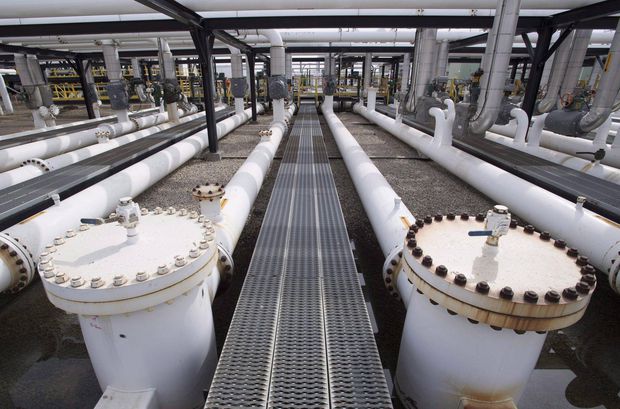 The battle over the flow of oil to the West Coast has ratcheted up with Prime Minister Justin Trudeau declaring that the Trans Mountain pipeline expansion will be built, and Alberta Premier Rachel Notley suspending electricity-purchase talks with B.C. – a move she says could cost that province almost half-a-billion dollars a year.

Ms. Notley told reporters that she had a phone conversation with Mr. Trudeau Thursday in which she demanded he take "greater and clearer leadership on this."

She noted that the ending of electricity talks with B.C. is only her government's first salvo in hitting back against what she said was her western neighbour's illegal push to try to stem any increases in Alberta heavy oil shipped through B.C. lands and ports to global markets.

Opinion: Can Trudeau afford to step back into grimy pipeline politics?

Opinion: The pipeline war no politician will win

"We are prepared to do what it takes to get this pipeline built – whatever it takes," she said.

Less than two hours earlier, British Columbia Premier John Horgan had played down the significance of his government's proposal this week to halt any increase to diluted bitumen transport while a scientific panel studies whether the heavy oil can be effectively cleaned up after spills into water bodies.

He said the regulations are still subject to consultations.

"It's way too premature to talk about these sorts of issues," Mr. Horgan said Thursday near Kelowna before Ms. Notley spoke. B.C. declined to comment on Alberta's declaration.

Ms. Notley was defiant as she spoke to reporters in Edmonton. On Wednesday, her office had suggested that one form of trade retaliation could involve not buying power from B.C.'s $10.7-billion Site C hydroelectric dam. However, on Thursday, Ms. Notley said she will send a letter to Mr. Horgan advising him Alberta has suspended all talks to do with electricity deals that could have netted B.C. up to $500-million a year through several existing interprovincial transmission lines. "They do not include any discussion of purchases related to Site C, which we will have more to say on later."

The Alberta Premier said Mr. Trudeau can make assurances that the federally approved Trans Mountain pipeline expansion will go ahead. But she said his government also needs to "commit specifically to the tools that they will use to make sure that this happens."

The Prime Minister – who was in Edmonton on Thursday and will be in Nanaimo, B.C., on Friday – has waded into an economic and environmental tug of war between Alberta and B.C. as he travels west. At the heart of this week's fight between the two provinces is B.C.'s decision to throw another hurdle in the path of Kinder Morgan Canada Ltd.'s planned Trans Mountain expansion – which would nearly triple the capacity of the pipeline. Alberta wants Ottawa to push its constitutional jurisdiction over interprovincial pipelines, while B.C. said the impact of a spill on the coastline is within its purview.

Supporters of the $7.4-billion pipeline project say the clock is ticking, as the expansion is already a year behind schedule because of permitting delays. Anger in Alberta over obstructions and cancellations to Canadian pipeline projects – which leaves the country's industry at a competitive disadvantage with other global oil and gas producers, including the United States – grew with B.C.'s announcement this week. In Fort McMurray, restaurateur Karen Collins posted on Facebook Thursday that with Alberta jobs on the line, she will no longer serve British Columbia wines.

"We want B.C. to really reconsider, and see what they're doing to their neighbouring province," Ms. Collins, owner of Asti Trattoria Italiana, said in an interview.

Mr. Trudeau had appeared to come to Alberta's side in a radio interview Thursday morning. He said it's in Canada's interest to get oil to new markets across the Pacific, and that the country cannot continue to be "trapped" by the significant price discount on Canadian heavy oil paid by U.S. refineries.

"One of the things that is important to remember is we have a federal government to look out for the national interest above various disagreements within the provinces. And we did exactly that on the Trans Mountain pipeline," the Prime Minister said on CBC's Edmonton AM show.

"We're going to get that pipeline built."

However, both Mr. Trudeau and federal Natural Resources Minister Jim Carr refrained Thursday from speaking more definitively about what action Ottawa will take.

In B.C., Mr. Horgan told reporters he had a brief conversation with his "good friend" Ms. Notley on Wednesday and told her that his province was only beginning to craft regulations that might limit the export of bitumen through its waters.

"There's nothing to take to court, we are consulting with the people of British Columbia," he said. "Should those regulations run afoul of Ms. Notley's aspirations, I'm sure she'll take action."

He responded to the Prime Minister's pledge to push through the pipeline by saying his government is already fighting Ottawa, and Alberta, in court over the NEB's approval of the project.

In Ottawa, Mr. Carr said the federal government is not going to act precipitously, noting that B.C. has only proposed a course of action at this point. But he confirmed officials are reviewing options that Ottawa could take if the province does try to block the project. "Every responsible government looks at options and anticipates what could happen."

B.C. officials "haven't done anything except announce consultations so there is no appropriate response to that," Mr. Carr said.

The minister noted that the government's $1.5-billion ocean protections plan will provide "unprecedented" spill prevention and response resources on the B.C. coast. It was announced in December, 2016, just after Ottawa approved the Trans Mountain expansion.

But critics say the federal government was relying on a flawed assessment process that Mr. Trudeau – when he was opposition leader – had vowed would not be used to approve the controversial pipeline project.

"We have a problem with the legitimacy of the federal approval in that Justin Trudeau promised electors in B.C. that no project could be approved that went through that inappropriate process before the National Energy Board," federal Green Party Leader Elizabeth May said.

Ms. May noted there are numerous lawsuits pending before the federal Court of Canada that challenged the fairness of the NEB process, as well as Ottawa's approval over the objections of three First Nations communities on the route.

"Justin Trudeau's sabre-rattling around 'this must be built' strikes me as really inappropriate, given the multiple court decisions yet to be rendered," Ms. May said.