William Johnson: What can we expect from PKP’s future blitzkrieg ‘to make of Québec a country?’ 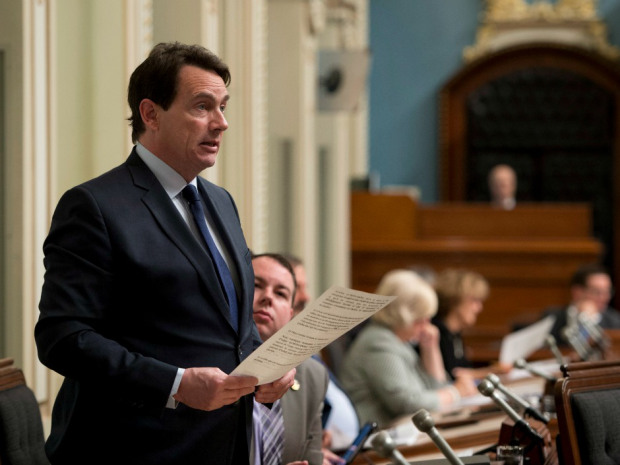 Pierre Karl Péladeau, the man of the raised clenched fist, swept the leadership of the Parti Québécois effortlessly Friday for one simple reason: he exuded by far the greatest credibility as the one who could lead Quebec to independence.
Never mind that his business career defined him as an extreme right winger, now leading a party congenitally committed to social democracy. Never mind that his management style showed him as an aggressive union-buster now taking over a party joined at the hip to Quebec’s powerful labour federations. What did it matter that he revealed himself during the leadership campaign as arrogant, impulsive, undiplomatic? Vive le Québec libre! Vive PKP!
Péladeau becomes the next leader of Quebec’s official opposition for one reason only: he shone among the candidates as the most committed to the single-minded pursuit of sovereignty. Why else would he leave the pinnacle of the business world to pick up a battered party? Besides, as the handsome celebrity controlling (from afar?) Quebec’s greatest communications empire, he seemed (with by his side media star Julie Snyder) singularly ordained to play the pied piper of Québecor, serenading Quebec into sovereignty’s Promised Land.
So what can we expect from PKP’s future blitzkrieg “to make of Québec a country?” As on most issues, his proposals for achieving independence remained largely undefined, except for the promise to make the pursuit of independence his constant top priority. He made no precise commitment on when he would trigger a referendum. He did promise to launch a “scientific” think-tank, the Institut québécois de recherche appliquée sur l’indépendance, devoted to demonstrating the advantages of a sovereign Quebec over the harms caused by Quebec’s inclusion in Canada. But this continues the constant Parti Québécois policy from its very founding to emphasize the why of independence rather than the how; to offer exhortations rather than true analysis, as though merely winning a referendum would provide a passport to the new country.
“To have a country is more important than ever,” PKP says on his website. “A country doesn’t mean turning in on oneself. It’s a base for launching out towards the world. That is why, during the next elections [in 2018], I hope to get the mandate to realize concretely the independence of Quebec.”
Rather than lay out a program now for Quebec’s accession to independence, he projected it into the future by making two promises. First, to “engage in a dialogue with all the parties, political movements and organizations of civil society with the aim of working out the elements of a common strategy, and setting in motion an immediate and permanent campaign of the Parti Québécois and the Official [PQ] Opposition in favour of independence.” Brave words, with the substance undefined.
The second promise also puts off all specific steps to decisions taken in the future: “To define, at the conclusion of the research and reflection to be undertaken, and before the next general elections, the process aimed at leading Quebec to national independence.”
So PKP totally avoids the central issue raised by the Supreme Court of Canada in its 1998 response to the reference on Quebec’s secession. The court ruled that there were two ways to attain independence: either by a successful revolution, or a negotiated amendment to the Constitution of Canada. A negotiated secession would require meeting four conditions: the test of democratic legitimacy (a clear answer to a clear question); the rule of law (abiding by the requirements of the Canadian constitution for its amendment); the principle of federalism (obtaining the consent of the other provinces); and recognizing the rights of minorities (in particular of the aboriginals).
The Québécois, practical people, would never knowingly engage in a revolution. So the only realistic means of secession is a negotiated amendment. But PKP, like the Parti Québécois, ignores the central issue in the real world: at what price can the PQ obtain the consent of the rest of Canada for Quebec’s secession? For example, would the PQ agree to exempt from secession the lands of the Inuit, the Cree and the Montagnais, who all voted in 1995 by 95 per cent or more against being part of Quebec’s secession? If so, Quebec would lose half its present territory. If not, the rest of Canada will consider secession illegitimate.
The problem is not how “Québec” could thrive after independence. The crucial problem is how to get there. What territory would remain under the jurisdiction of the new sovereign Quebec? The Supreme Court made clear that a seceding Quebec is as divisible as Canada is now — and in accordance with the very same principles. But PKP offers only silence on the issue.
Successful revolution or a negotiated amendment? There is no third alternative. That’s the central issue that no PQ leader, neither René Lévesque nor Jacques Parizeau, Lucien Bouchard, Bernard Landry, André Boisclair or Pauline Marois, has ever been willing to confront. Now PKP is proving as irresponsible as all his predecessors.

Scotland has it right

William Johnson, a Quebec journalist, is a former president of Alliance Quebec

William Johnson: What can we expect from PKP’s future blitzkrieg ‘to make of Québec a country?’

Scotland has it right