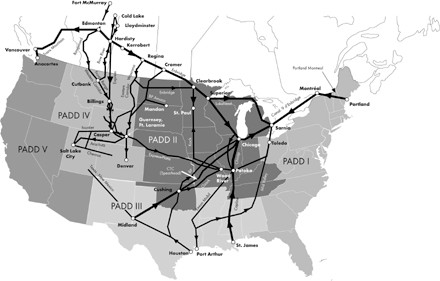 Could it be that a keystone belief and a bedrock of prosperity in Canada might disappear over the next two decades?
For a long time, it has been assumed that whatever surplus oil (and natural gas) Canadians could produce would be gladly purchased by the United States. “Pump it and they will come” has been an underpinning reality for Canada’s economy.
Recently, the U.S. Energy Information Agency produced an estimate that the U.S. has almost 60 billion barrels of “technically recoverable” shale oil. Now, “technically recoverable” does not mean that all this supply will be used. Nor does it mean, however, that supplies the agency knows about today will not increase, perhaps substantially, as new deposits are discovered or innovative technologies for discovery and extraction are found. All that can be said is that 60 billion barrels of “technically recoverable” oil is a godsend for the United States.
These barrels, or a portion thereof, could be a game-changer in a country with 7.4 million barrels of daily net imports of oil. U.S. dependence on imported oil has declined since peaking in 2005. The recession of 2008 and its aftermath knocked down consumption. So did improved energy efficiency measures, switching to natural gas, more renewable energy and consumers watching their pennies.
Forthcoming tighter mileage requirements for cars will drive down demand for oil, as will requirements for heavy-duty vehicles that President Barack Obama promised in his recent climate change speech. Indeed, ExxonMobil, in its 2013 World Outlook, thinks demand for oil will drop by almost 20 per cent from 2010 to 2040 in North America, the largest part of which by far is the United States, with the biggest reason being less fuel needed for vehicles.
Every barrel of oil that the U.S. can supply for itself reduces the country’s current account deficit, strengthens its economy and, most important, makes the country less vulnerable to international events in faraway places, some of which are notoriously volatile and shot through with anti-American attitudes. U.S. policy-makers – and ordinary citizens – therefore assign a very high priority to reducing and, if possible, eliminating their country’s dependence on oil imports, especially from the Middle East and Venezuela.
To Americans, Canada is seen as almost an extension of their country. Canadian cabinet ministers keep talking up Canada there as “reliable and friendly,” which it is, in part because getting Canadian oil to anywhere but the United States is difficult and expensive. But what if, down the road, the United States doesn’t need any imported oil, or only a small amount relative to its own consumption?
Today, Canada is the largest foreign supplier of oil to the United States, accounting for 28 per cent of total U.S. imports. What would happen if the U.S. Energy Information Administration’s “low net imports” scenario were realized by 2035?
Under this scenario, the EIA assumes higher domestic crude production from offshore, Alaska, gas-to-liquids processing and lots more shale oil. Simultaneously over this period, vehicle technology continues to improve, more fuel efficiency standards are introduced, electric vehicle batteries improve, natural gas begins to be used extensively in freight transportation and total vehicle miles travelled are reduced. Plenty of what the EIA calls “inherently speculative assumptions” drive this (and other) scenarios.
The report makes also no mention of another potential game-changer: Washington putting a price on carbon, which is obviously the best way of reducing the carbon dioxide emissions that cause global warming.
The Obama administration, like the Harper government in Canada, is determined to rely on regulations to curb emissions. Regulations are the least economically efficient tool but the least politically costly method available. A price on carbon, either through a tax whose revenues would be recycled back to consumers and business in lower taxes on incomes or revenues, or through a cap-and-trade market system, would over time lower demand for big GHG-producing fuels such as oil and, of course, coal.
For the moment, this rational approach crashes against the irrationality of politics. What is not irrational, however, is the possibility that the United States might become self-sufficient in oil, with grave consequences for Canada.

In case you’re looking for an energy project with ‘vision’