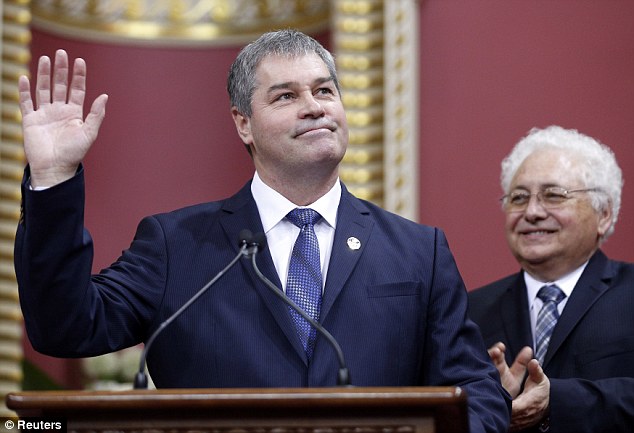 Defending staff at Neufchâtel High School during a National Assembly meeting yesterday, Bolduc said: 'It is permitted to do strip searches, on one condition: it must be very respectful.'
'There are reasons for which we can be obliged to conduct searches... What's important is that we respect the law and respect the framework that was put in place and respect the person',' he added.
His defense of the controversial practice led to Jean-François Roberge - a former elementary school teacher who is now a politician and education spokesman for the city's Coalition Avenir Québec party - to call for education minister's immediate resignation.
'It was completely, completely wrong to say that it's OK to force a teenage to get nude just because the principal thinks that maybe she has some drugs on her,' he told the Montreal Gazette.
'And I would have thought that the minister would stop this and say it's wrong. But no, no, he said it's good and there's no problem with this,' he added.
News of the 15-year-old girl being forced to strip naked at Neufchâtel High School emerged in the Journal de Québec newspaper last week.
The teenager claimed that she had jokingly sent a text message to a male friend offering him 'pot'.
The text was later discovered by a teacher who confiscated her phone, read her messages. Upon spotting the marijuana reference the teacher passed the phone on to the school principal.
The young student was reportedly questioned about the text and - as her school locker had previously been searched on suspicion of containing drugs - the decision was taken to order her to strip naked behind a blanket in the principal's office.
She was found not to be in possession of marijuana, and was left feeling 'intimidated', 'violated', 'destroyed' and 'ashamed', according to the Journal de Québec.
In a statement, Quebec's school commission said the teenager's search was 'exceptional', but claimed it had been carried out as per 'established norms.'