We should wait no longer before opening the difficult debate on the full or partial privatization of Hydro-Québec. This project would lead to greater value for our water resources. At the same time, we could improve Quebec's energy efficiency and the health of our public finances. Favourable conditions have arisen for carrying out this reform, with deregulation of the North American energy market and a wider opening of the electricity sector on a continental scale.
However, Quebecers pay far less for our electric energy than its market value, and there is not much left over that can be sold for what it is really worth. In the last few years, electricity rates have risen much more slowly than oil prices. Electricity costs 75 per cent more in Toronto and 300 per cent as much in New York. Bringing rates up to the market price for electricity would promote energy savings, and the kilowatt-hours not consumed by Quebecers would find ready buyers on export markets.
Privatization is achievable, but what goals do we aim for and what stages do we go through? We offer two different approaches to carrying out this reform.

Garcia: Full privatization would mean debt-free Quebec
Looking at the market value of energy-producing companies listed on the Toronto Stock Exchange, we might conclude Hydro-Québec is worth in excess of $130 billion. Selling it would allow for the elimination of Quebec's debt, which is at $122.6 billion.
A debt-free Quebec would save $5.5 billion in annual interest charges, after taking account of Hydro-Québec's reduced contribution to public revenues. Eliminating this debt would enable us to lower income taxes by 33 per cent and offer a highly competitive tax environment to stimulate economic growth.
Hydro-Québec does not have to be listed on the stock exchange in a single block. To minimize the impact of the proposed rate hike on the economy and on Quebec consumers, the sale should be spread over several years.
With Hydro-Québec's structure already divided into four autonomous entities (production, transEnergie, distribution and equipment), these divisions could form the basis of a gradual listing of the company on the Toronto Stock Exchange. The first division to be privatized would be Hydro-Québec distribution. Once this was done, it would be easier to adjust rates based on the cost of obtaining electricity since a private company has to run at a profit.
In a second stage, the assets of Hydro-Québec production could be spun off in several groups that in turn would be sold to the already privatized Hydro-Québec Distribution. This sale would be conducted according to predetermined financial parameters reflecting the true value of the assets sold. Thus, Quebec's electricity rates, based on costs, would gradually move closer to market rates as successive privatizations proceeded.
Claude Garcia is the board member of several companies and former president of Standard Life. 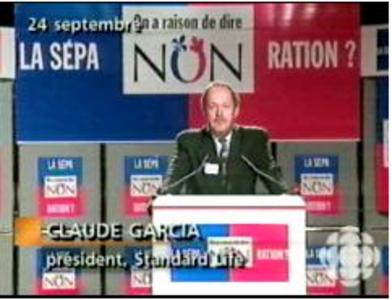