The lights are going out all over America — literally. Colorado Springs has made headlines with its desperate attempt to save money by turning off a third of its streetlights, but similar things are either happening or being contemplated across the nation, from Philadelphia to Fresno.
Meanwhile, a country that once amazed the world with its visionary investments in transportation, from the Erie Canal to the Interstate Highway System, is now in the process of unpaving itself: in a number of states, local governments are breaking up roads they can no longer afford to maintain, and returning them to gravel.
And a nation that once prized education — that was among the first to provide basic schooling to all its children — is now cutting back. Teachers are being laid off; programs are being canceled; in Hawaii, the school year itself is being drastically shortened. And all signs point to even more cuts ahead.
We’re told that we have no choice, that basic government functions — essential services that have been provided for generations — are no longer affordable. And it’s true that state and local governments, hit hard by the recession, are cash-strapped. But they wouldn’t be quite as cash-strapped if their politicians were willing to consider at least some tax increases.
And the federal government, which can sell inflation-protected long-term bonds at an interest rate of only 1.04 percent, isn’t cash-strapped at all. It could and should be offering aid to local governments, to protect the future of our infrastructure and our children.
But Washington is providing only a trickle of help, and even that grudgingly. We must place priority on reducing the deficit, say Republicans and “centrist” Democrats. And then, virtually in the next breath, they declare that we must preserve tax cuts for the very affluent, at a budget cost of $700 billion over the next decade.
In effect, a large part of our political class is showing its priorities: given the choice between asking the richest 2 percent or so of Americans to go back to paying the tax rates they paid during the Clinton-era boom, or allowing the nation’s foundations to crumble — literally in the case of roads, figuratively in the case of education — they’re choosing the latter.
It’s a disastrous choice in both the short run and the long run.
In the short run, those state and local cutbacks are a major drag on the economy, perpetuating devastatingly high unemployment.
It’s crucial to keep state and local government in mind when you hear people ranting about runaway government spending under President Obama. Yes, the federal government is spending more, although not as much as you might think. But state and local governments are cutting back. And if you add them together, it turns out that the only big spending increases have been in safety-net programs like unemployment insurance, which have soared in cost thanks to the severity of the slump.
That is, for all the talk of a failed stimulus, if you look at government spending as a whole you see hardly any stimulus at all. And with federal spending now trailing off, while big state and local cutbacks continue, we’re going into reverse.
But isn’t keeping taxes for the affluent low also a form of stimulus? Not so you’d notice. When we save a schoolteacher’s job, that unambiguously aids employment; when we give millionaires more money instead, there’s a good chance that most of that money will just sit idle.
And what about the economy’s future? Everything we know about economic growth says that a well-educated population and high-quality infrastructure are crucial. Emerging nations are making huge efforts to upgrade their roads, their ports and their schools. Yet in America we’re going backward.
How did we get to this point? It’s the logical consequence of three decades of antigovernment rhetoric, rhetoric that has convinced many voters that a dollar collected in taxes is always a dollar wasted, that the public sector can’t do anything right.
The antigovernment campaign has always been phrased in terms of opposition to waste and fraud — to checks sent to welfare queens driving Cadillacs, to vast armies of bureaucrats uselessly pushing paper around. But those were myths, of course; there was never remotely as much waste and fraud as the right claimed. And now that the campaign has reached fruition, we’re seeing what was actually in the firing line: services that everyone except the very rich need, services that government must provide or nobody will, like lighted streets, drivable roads and decent schooling for the public as a whole.
So the end result of the long campaign against government is that we’ve taken a disastrously wrong turn. America is now on the unlit, unpaved road to nowhere. 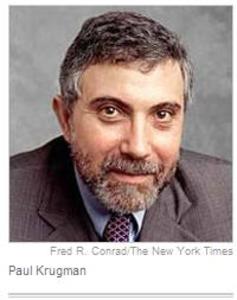 Paranoia of the Plutocrats