Premier Dalton McGuinty has clearly staked his government's future on a single issue – opposition to public funding for religious schools.
In a series of speeches, press conferences and ads in the past 48 hours, McGuinty stated that public education is "threatened" by Progressive Conservative Leader John Tory's proposal to extend funding beyond just the Catholic system to all "faith-based" schools.
"I believe that taking half a billion dollars from public schools to finance private religious schools is a mistake," said McGuinty in various ads that aired yesterday.
Other issues – including health care, the environment and the economy – were given comparatively short shrift by the premier on the first formal day of the provincial election campaign.
It is easy to see why McGuinty and the Liberals have chosen to fight on the ground of funding for religious schools.
First of all, it clearly changes the channel from his broken promises – the ground on which the Conservatives would prefer to do battle.
Secondly, McGuinty seems to have public opinion on his side on the issue. An Ipsos-Reid poll published yesterday by the National Post shows just 21 per cent of Ontarians favour extending funding to all faith-based schools.
An aside: The Conservatives say their research shows that support for the idea increases when voters are given a full explanation of what they are proposing for the 50,000 students now being educated in private religious schools. "We're going to bring these kids into public education," said Tory at his kickoff press conference yesterday. But the subtleties of this argument are likely to be lost on most voters.
Thirdly, by demonizing Tory's stand on religious schools, McGuinty hopes to regenerate the "strategic voting" that helped elect the Liberals in the 2003 provincial election, when they attracted support from many NDP-leaning voters who wanted to oust the Conservatives from office.
The conventional wisdom at Queen's Park is that strategic voting won't happen this time because the Liberals are now in power and the centrist Tory just isn't as scary as his immediate predecessors as Conservative leader (Mike Harris and Ernie Eves).
But if McGuinty can convince NDP-leaning voters that public education would be threatened by a Conservative victory, then 2007 might be a replay of 2003 – a Liberal majority.
The premier was working that angle yesterday at his press conference, where he said that a vote for "one of the other parties" (presumably the NDP or the Greens) would result in a Conservative government hostile to the public sector.
There are, however, risks for McGuinty in basing his campaign on the religious schools issue.
For example, he runs the risk of being called a hypocrite, because he himself benefited from a "faith-based" (Catholic) education that was publicly funded and because his wife teaches in a Catholic school. As well, McGuinty risks alienating voters in the Jewish, Christian, Muslim and other communities that favour public support for faith-based schools.
Spokespersons for these communities note that when he was opposition leader McGuinty seemed sympathetic to their appeals for funding. "Yes, there's an issue of unfairness there that will have to be addressed," said McGuinty in a 2001 interview.
In an interview yesterday, McGuinty suggested his views on the issue had evolved over the years. "My thinking certainly has reached a point where I believe that the most important thing that we can do for Ontario and for Ontario's children is to further strengthen public education," he said.
That is unlikely to mollify the Jewish, Muslim, Christian and other parents of children in religious schools.
Finally, McGuinty risks reopening a can of worms: the issue of funding for Catholic schools, which dominated Ontario politics for most of the province's first 118 years before being settled by all-party agreement in 1985. That agreement still holds, at least among the three parties in the Legislature. (The Greens, without a seat in the Legislature, have called for an end to the funding of Catholic schools.)
But public opinion appears to be heading in another direction: the aforementioned Ipsos-Reid poll shows that only 23 per cent of voters want to maintain funding of Catholic schools while 53 per cent favour "a single school system."
Perhaps concerned over this drift in public opinion, the Catholic bishops have issued a public statement reiterating their "support for parental rights in education, including public funding for faith-based schools."
In yesterday's interview, McGuinty did not bite on a question about whether he is concerned the debate over religious schools will head in an unintended direction and undermine support for Catholic funding. "It's pretty hard for me to anticipate where it's going to go," he said.
But clearly he is anticipating that, in the short run at least, the debate helps to re-elect his government.
***
Ian Urquhart 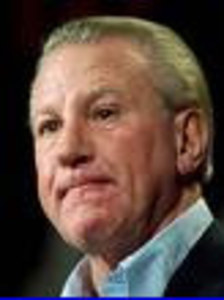