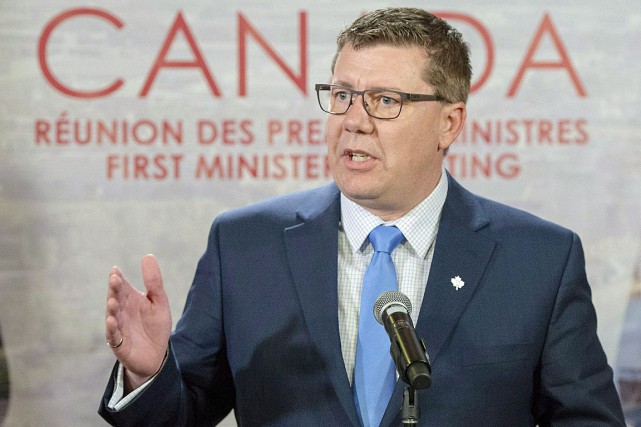 If you believe lawyers from Saskatchewan, Ontario and New Brunswick, the federal carbon backstop could be the beginning of the end of Canada as we know it.

He warned of a “radical displacement of provincial authority” and a “big brother approach to federalism.”

Joshua Hunter, counsel for Ontario, backed him up. He said the act is so broad that it could affect “everything that we do.”

“If taken to its extremes, there’s great potential to upset the balance of our federation,” he said.

New Brunswick’s lawyer, William Gould, warned of a slippery slope that would end with a “limitless” intrusion into provincial affairs.

“It only begins here,” he said.

All three provinces will feel the weight of Ottawa’s carbon backstop this year, with an output-based levy already in place and a fuel tax set to follow in April. They say it’s all unconstitutional.

Sixteen groups — governments, environmental organizations and even the Alberta opposition — are intervening in the case. More than three dozen lawyers faced a five-judge panel. The public was pushed into an overflow room. A small group of protesters gathered outside, where they handed out pamphlets warning about deadly heatwaves, raging wildfires and devastating droughts.

The reference case is essentially a request for the province’s top court to give a legal opinion on whether the carbon backstop is constitutional. But it won’t be the last word. Ontario is bringing a similar case, and Saskatchewan’s attorney general believes there’s “no doubt” the matter will go to the Supreme Court of Canada.

Mitch McAdam, also representing Saskatchewan, said the case simply isn’t about whether climate change is real, or whether a carbon tax is the best way to fight it.

“The Government of Saskatchewan is not made up of a bunch of climate change deniers,” he said.

Saskatchewan’s lawyers called the scientific consensus around climate change and its risks “irrelevant” to the case. Jacobson said the advance of knowledge can’t change what the constitution means.

That prompted Chief Justice Robert Richards to ask whether the risk that climate change could “literally imperil the future of the planet” should be taken into account. He posed challenging questions throughout Saskatchewan’s arguments.

McAdam urged the court to uphold the “principle of federalism.” He blasted Ottawa for imposing a tax selectively on some provinces, but not others, depending on what it thinks of their plans to fight climate change.

He called that “unprecedented in Canadian history.” He said it would open a “very dangerous pandora’s box” and lead to “great mischief.”

But federal lawyers, who will present their case on Thursday, are expected to argue the carbon backstop isn’t a tax at all, but a regulatory charge. McAdam made light of that position on Tuesday.

He said Saskatchewan fears the tax will make life more expensive and force businesses to make impossible choices. But he denied that Saskatchewan is a “rogue province,” saying its government defends federal jurisdiction elsewhere and has its own climate plan.

“We are not doing nothing,” McAdam said.

He said that the act intrudes on rights explicitly granted to the province in the constitution, including the power to regulate its own industry.

But Ottawa can rely on a constitutional catch-all: Its authority to enact laws for the peace, order and good government of Canada. Federal lawyers are expected to hold that the carbon tax is of such grave national concern that the provinces can’t tackle it alone. If so, it could allow Ottawa to tread on provincial jurisdiction.

The lawyers for Saskatchewan, New Brunswick and Ontario spent much of their time poking holes in that argument.

While it may be true that no one province can defeat climate change on its own, Jacobson pointed out that no single country can either.

“Every megatonne that China might be guilty of will have the same effect on British Columbia as every megatonne (from) Saskatchewan,” he said.

In his view, that means Saskatchewan is no more able to defeat the environmental efforts of its neighbours, especially since its impact on emissions is “relatively infinitesimal.”

The provincial trio then waded into what Gould called “esoteric” legal distinctions. He compared and contrasted greenhouse gas regulations to the “unity of form” possessed by a hockey puck. He said the “global gravitas” of climate change isn’t enough to make it a national concern.

Hunter admitted that climate change is a “concern to the nation,” but he said that doesn’t make it, constitutionally, a national concern.

“If we accept this kind of approach, it will lead to the end of the federation,” McAdam said.

Lawyers defending the backstop will have their day in court Thursday.