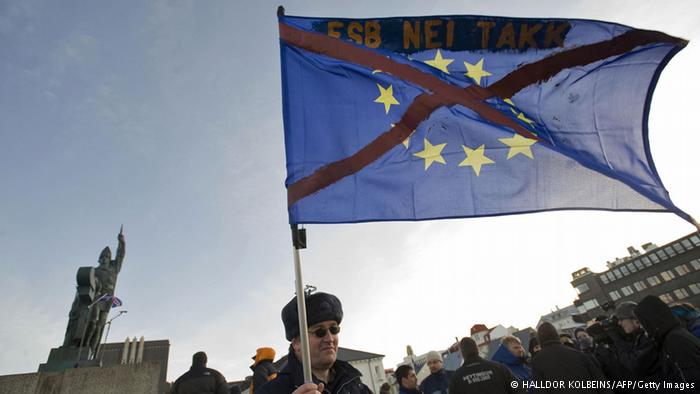 The Nordic nation has handed the EU an official letter saying it will not continue its application process. Fishing laws alongside popular and political opinion have often proven a challenge for Iceland’s accession.
Iceland has dropped its application to join the European Union, the country’s foreign ministry announced on Thursday.
“The government considers that Iceland is no longer a candidate country and requests the EU to act in accordance with this from now on,” said the ministry’s statement. The conclusion was reached at a cabinet meeting on Tuesday, it said. A formal letter announcing the decision was delivered to Latvian Foreign Minister Edgars Rinkevics, who was holding talks Thursday in Iceland with Foreign Minister Gunnar Bragi Sveinsson, as Latvia currently holds the rotating EU presidency.
The Foreign Ministry said Reykjavik had engaged in “extensive communications” with EU officials over the past several weeks.The Nordic island country applied for membership in 2009 and launched official accession talks in 2010, following decades of economic cooperation with the EU. Iceland frequently consults with the EU on foreign policy and has taken part in some EU civilian peacekeeping missions abroad.
One of the main challenges for countries like Norway and Iceland in joining the EU is the Common Fisheries Policy. For nations like these, where fishing is a significant industry but where domestic demand is far smaller than production, the law poses a problem as it dictates which member states are allowed to catch what types of fish and at what amounts. Iceland has long argued that its own quota systems – which are not compatible with the EU’s – are better both for business and for preserving populations. Iceland has criticized, in particular, EU quota policies that sometimes force fishermen to throw back caught fish – often dead fish – that are either too small, part of too large a catch, or simply of the wrong type…Deutsche Welle