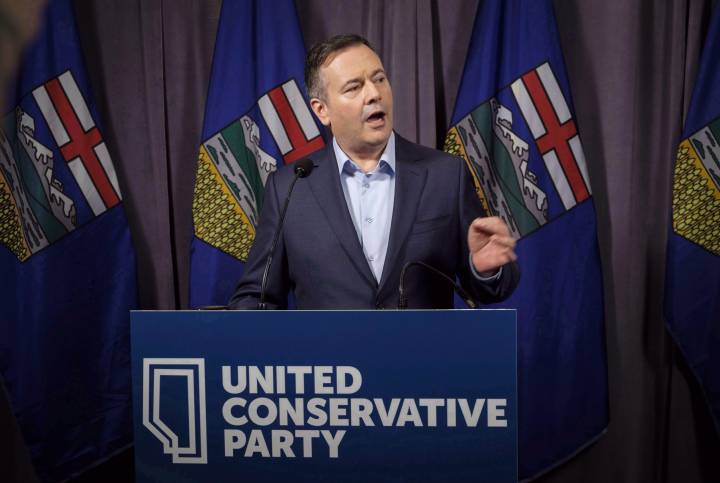 Premier Jason Kenney wants Quebecers to embrace the merits of pipelines as conduits for Alberta's oil and gas. It will be a very tough sell.

Jason Kenney, the premier of Alberta, hopes to convince Quebecers they are wrong to stand in the way of his province’s pipelines.

In Montreal this week making the rounds of media outlets and meeting with the business community, Kenney wants Quebec and Alberta to be “partners in prosperity.” In other words, he wants Quebecers to support — or at least not block — conduits to get his province’s oil and gas to foreign markets.

In Kenney’s view, the scorn so often heaped on the “tarsands” by Quebec activists and politicians alike is unfair, undeserved — even hypocritical. The economic, social and environmental record of Alberta’s industry speaks for itself, he said, when compared with that of “OPEC dictatorships.”

This is a message Quebecers could be hearing a lot more of very soon. The Alberta government will be opening a branch office in Montreal this spring.

But is Kenney’s sales pitch Mission Impossible in a city where half a million people took to the streets to demand action on the climate emergency last September?

Across town on Tuesday, student leaders offered a glimpse of what he’s up against. The groups who helped organize historic climate demonstrations last spring and fall announced the formation of a new coalition and called for a weeklong strike at the end of March. Among their demands is that Quebec nix all projects related to the exploration, exploitation or transportation of fossil fuels — i.e.: the very pipelines Kenney is touting.

Kenney would be unwise to underestimate this mobilization. Students may be a marginal political constituency elsewhere in the country, but the Maple Spring showed they can be a force to be reckoned with in Quebec. And if anything, young people have more widespread sympathy for their cause now than they did back in 2012.

In a nod to the growing clout of the climate movement, Quebec Premier François Legault last weekend proclaimed that “2020 will be the year of the environment.”

Doubts abound over the Coalition Avenir Québec’s sincerity, given this new eco-consciousness is at odds with this government’s other plans, policies and promises. But Legault’s green conversion could make it a lot harder for Kenney to find in Quebec, the “constructive” partner Alberta is seeking.

Legault has spoken favourably of building a liquefied natural gas route to the Saguenay, but has said a new east-west oil pipeline lacks social acceptability in Quebec.

Kenney and Legault have clearly mended fences since late 2018, when the newly minted Quebec premier set off a firestorm out West by calling Alberta oil “dirty.” But Kenney now has to contend with a resurgent Bloc Québécois. He has sparred with its leader, Yves-François Blanchet. But trading more barbed rhetoric risks stoking Alberta alienation as much as dormant Quebec separatism.

So far, Kenney’s visit is a charm offensive aimed at Quebecers as much as their government.

“Albertans accept the very serious challenge of climate change and we are becoming world leaders in the most responsible development of non-renewable resources, with massive investments in technology that shrinks environmental impact and CO2 emissions,” he said.

But there is an edge to his tone as he challenges the intransigence of those seen as holding Alberta back.

“In the real world, where the same students want to fly to their vacations and use their cellphones that are made from petroleum products and live an advanced standard of life, for at least some decades to come there is going to be significant global demand for that energy that Canada has in abundance,” he said. “To people who think that Canadian energy is dirty and socially unacceptable then they’re welcome to stop taking the transfer payments and equalization that are generated by that energy. So if they’re really serious about it, then put your money where your mouth is.”

Money doesn’t always talk in Quebec. This is after all, a province that sat out the shale gas boom, and ultimately cancelled exploration on pristine Anticosti.

Kenney’s guilt trip, that Quebecers owe Alberta’s oilpatch for generous social programs, also oversimplifies how equalization is calculated, the wage gap between the two provinces, as well as decades of political choices.

But Kenney is right about a few things.

Quebecers may talk the talk when it comes to climate change, but their driving habits tell a different story. The record number of gas-guzzling SUVs on the province’s roads, the shattering of fuel consumption records last year and accelerating sprawl are increasing the appetite for Alberta’s oil and gas.

And though the urgency and necessity of shifting away from fossil fuels is clear, the world will remain dependent on them to function for years yet. So there is an argument to be made to use our own to fund the kind of just transition many climate activists are calling for. Even Elizabeth May, the Green Party leader, campaigned in favour of relying exclusively on Canadian resources during a sunset period.

Quebec and Alberta have historically found common cause on many issues within the Canadian federation. But when it comes to the environment versus oil and gas, their differences may be irreconcilable.

CORRECTION: An earlier version of this story contained incorrect information and has been updated. The Alberta government, and not the Canadian Energy Centre, will be opening a new office in Montreal this spring. The Gazette regrets the error.

Allison Hanes: We are starting to own up to racism in Quebec

Allison Hanes: We are starting to own up to racism in Quebec

Allison Hanes: Imagine returning to work with your rights stripped

Allison Hanes: No room on the margins in Hampstead