'Everyone’s angry': Why you're wrong if you think Wexit is just 'an Alberta thing' 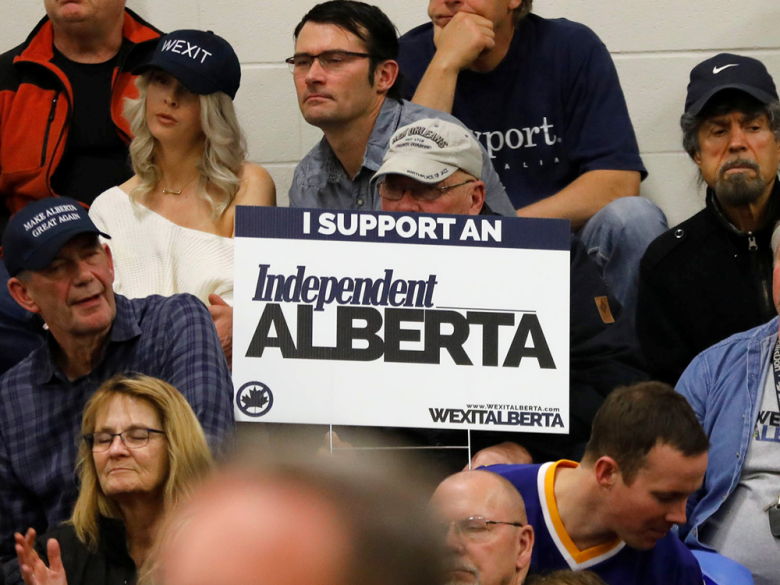 The Western separatist movement arising out of anger and frustration with the Confederation may appear to be a made-in-Alberta initiative for some parts of Canada.

But the fanning of the flames of separatism goes beyond Wild Rose borders into Saskatchewan as well as some pockets of both Manitoba and British Columbia.

“There’s a lot of people who really want to see this separation happen,” says Lee Smith, leader of Wexit B.C. and a small business owner in New Westminster on the West Coast.

“This is an old sentiment, too. This is from my grandfather’s day. I remember being a child at the dinner table and as soon as election time came around and the election was done my uncles, my great uncles, all adults they were talking about how we separate.”

Smith says the movement is not just conservative, the sentiment is felt among left-leaning people too.

“It’s actually really simple. Taxation without representation. That’s what it is. That’s what it boils down to. We have no say here in the West. None. We could all vote the same way and the election would be decided by Ontario and Quebec that day,” says Smith.

“Preston Manning realized this when he had the Reform Party when he couldn’t make a difference and he did a great job. But at the same time he couldn’t make a difference when he helped form the modern Conservative Party as we know it . . . What this comes down to is we are basically the economic engine for this country but we have no say in how it’s spent. It’s hardly fair.”

Smith says Wexit’s following in B.C. has reached close to 15,000 followers in a month.

“You consider that the Green Party has 16,000 and they’ve been around for 10 years. I was not expecting this to move this quickly,” he adds. “It’s not just one region. Everyone’s angry.”

A look at the electoral map of Canada shows how Conservative blue parts of the West has become with a growing frustration with the Liberal Party and its policies. Quite simply, citizens of the Prairies are mad and that has fuelled a Wexit movement that is gathering steam, with angry words turning into political action.

“Alberta is certainly leading this and Saskatchewan is very much the sister province to Alberta right now and has been a steadfast ally,” says Derek Fildebrandt, a former Alberta provincial politician and now publisher of the Western Standard and president of Wildrose Media Corp.

“They would be wrong to say that this is an Alberta thing — or even an Alberta and Saskatchewan phenomenon. But it is fair to say Alberta is driving it.”

He adds, “Like the answer to everything. It’s complicated. Alberta’s not uniformly angry and moving in the direction of sovereignty. There are pockets here and there . . . Albertans are not uniformly against Ottawa. But broadly we are. Alberta is in many respects the leading jurisdiction of the Western cause if we can call it that — being the wealthiest and certainly the largest of the Prairie provinces and gaining on B.C. overall.

“Manitoba is a very split province. Rural Manitoba culturally and politically is extraordinarily similar to rural Alberta but politically and culturally Winnipeg is quite different than Calgary. So there is no uniformity on this.”

If Wexit has not entrenched itself in Manitoba now, certainly parts of the province clearly shares the same sense of hopelessness and alienation with the rest of the West.

In a letter to Prime Minister Justin Trudeau after the election, Bill Campbell, president of the Keystone Agricultural Producers of Manitoba, wrote: “Since the election has concluded, we have heard a great deal from some Western Canadian politicians about separation from the rest of Canada given the lack of Western Canadian voices in your government. These discussions do not serve the best interest of our country and are not discussions Manitobans support. We do, however, have the need to hear from our federal government on the issues that we encounter every day.”

In an interview while he was moving some cattle, Campbell says there is much concern in rural Manitoba on where agriculture fits in all of Canada’s scheme. In some ways, he says, there is a feeling of hopelessness. Even though Manitobans express their concerns nothing seems to even grab the prime minister’s attention.

“There’s a lot of concerns, a lot of worry about what’s going to happen. I don’t think it is as strong an alienation as the other two provinces (Alberta and Saskatchewan) but in rural Manitoba there’s quite a concern about where things are going to go,” said Campbell.

“We certainly don’t want to be ignored in our conversations and we certainly are aware of what appears to be favouritism with regards to certain issues and our issues are not necessarily addressed or even talked about. There is no active Wexit part here. But the coffee shop talk and the conversations are that you can only tolerate so much and then you need to do something. As far as actively, it’s more conversations and frustration — there’s a large element of frustration here that we’re being ignored.”

The October federal election results were clear in their sentiment towards the Liberals. All 14 seats in Saskatchewan went to the Conservative Party. All but one of the 34 seats in Alberta followed the Tory tide in the Prairies. That one lone seat went to the NDP. And pockets of southwest Manitoba and the Eastern side of British Columbia, bordering the Alberta border, were also Tory blue.

Eric Wall, who has been involved in setting up Wexit Saskatchewan, says over 2,000 kilometres of Western Canada did not vote a single Liberal MP in the federal election yet once again that part of the country is faced with another four years of a Liberal government.

“We’re trapped in this Confederation,” he says. “If we don’t have a voice, then what do we truly have? We can’t set the direction for our future and the future of our children.”

We’re trapped in this Confederation

Lori Williams, a political scientist with Mount Royal University in Calgary, says Western alienation has been a phenomenon in Western Canada pretty much as long as the Prairies and British Columbia have been a part of Canada.

“It’s been a longstanding sense that the West is contributing more to Confederation than it’s getting in return. That they are sort of outnumbered and drowned out in political matters. The elections are decided before a single vote is counted west of Ontario sometimes and all of that lends itself to a sense of not having the power to ensure that we have fair treatment within Confederation,” says Williams.

“We saw the Western Canada Concept coming up historically. We’ve seen the Reform Party. And it’s not an accident these have come up in Alberta but it’s not Alberta alone that is the seat of this. Certainly Saskatchewan and Alberta have very similar concerns. Some are shared by people in Manitoba. Some are also shared by people in British Columbia. For that matter, a lot of people in the Maritimes feel similarly.”

Williams says Alberta has been the loudest voice over the years from Premier Peter Lougheed days to today with Premier Jason Kenney. Preston Manning, the leader of the old Reform Party, was also a prominent spokesman for the Western cause. The Alberta roots may leave the impression in other parts of Canada, particularly Ontario and Quebec, that the sentiment doesn’t go beyond that province’s borders.

“But the reality is that there are some issues that are shared by Manitoba, Saskatchewan, Alberta and British Columbia or some combinations of those provinces depending on what the issue is,” she says.