'Enough about the hijab'

Quebecers should accept head scarf and move on, report concludes 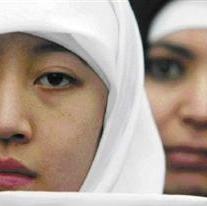 
The Muslim hijab.
There's nothing wrong with it. It's no real threat to Quebec values. And most women here wear it by choice, not because of coercion.
That's what the Bouchard-Taylor commission has concluded after a year of study costing $5 million.
"And in the end, what happens to the freedom of each and every one to display her deeply held convictions, as long as they don't impinge on the rights of others and don't lead to anybody being put out?," Gérard Bouchard and Charles Taylor write.View Larger

In the final draft of their report - which was submitted to the provincial government yesterday and is to be made public at a press conference Thursday - scholars Gérard Bouchard and Charles Taylor say Quebec society will have a lot to lose if it restricts the wearing of the Muslim head scarf strictly to the home and outdoors.
Saying the province's 130,000 Muslims, especially Arab Muslim immigrants, are "along with blacks, the group that is the most touched by different forms of discrimination" in Quebec, Bouchard and Taylor plead for an end to bickering over the hijab.
"Let's finish with the head scarf, which has caused so much distress in the last few years," the reasonable accommodation commission's chairmen say in their report, parts of which The Gazette obtained last week.
"In light of a great number of unequivocal testimonies, we can take it for granted - believe us - that the young girls or women who wear it give it various meanings and are motivated in contrasting ways, some of which, it's true, don't jibe with the dominant values of our society."
(In a footnote, the professors explain some of those different meanings: "Sometimes it signifies submission and oppression, pure and simple, sometimes prudishness, respectability and modesty, and sometimes a way of affirming one's identity or autonomy or even feminism.")
"But by trying to combat these situations, isn't there a risk that we'll harm other citizens who made a perfectly clear choice? How is it possible to disentangle the two? And in the end, what happens to the freedom of each and every one to display her deeply held convictions, as long as they don't impinge on the rights of others and don't lead to anybody being put out?"
Devout Muslim women - a small minority of Quebec Muslims overall - suffer intimidation and discrimination in the Quebec job market for wearing the hijab "because employers fear getting demands for accommodations," the commissioners say, recounting testimony from several Muslims in public hearings last fall.
For example:
A young hijab-wearing woman studying to be a pharmacist "saw her job applications rejected by 50 pharmacies before she was finally able to land a job with an Arab pharmacist."
A 17-year-old Muslim girl "drew constant taunts at school and in the street" because of her hijab. "But her mother taught her never to answer them, because she doesn't want to 'fill her with hate.' "
The commissioners also write that the hijab is a lightning rod for a wide range of opponents in Quebec, all of whom see it in a negative light.
"Diverse voices are raised to denounce the Muslim head scarf: those of radical feminism, those of republican egalitarianism and - we heard various ways of it being expressed - also those of intolerance."
That condemnation shouldn't happen, they say.
"The freedom to manifest one's religion or one's conviction is recognized by all the great international legal conventions and by the Quebec charter (of human rights and freedoms)," they say in a footnote, also quoting the testimony of a Muslim man named Mohamed Chraibi, who addressed the commission at a hearing in Laval last November this way:
"No one has the right to impose nor forbid the wearing of the hijab by a woman." Or, as an unnamed Muslim woman at the Laval hearing put it: "My body belongs to me - I'll show what I want of it."
In another footnote, Bouchard and Taylor talk of some Quebecers' "often irrational" opposition to the hijab, which they see as a denial of a woman's femininity, a symbol of her submission to men and to God, or simply a restrictive piece of clothing that would be better left in a drawer.

They quote from a brief submitted to them in November by a woman in Longueuil, when their 17-city tour of the province swung through town: "In 2007, in Quebec, when a Muslim women wears the veil, I tremble," the woman wrote.
"To anyone who shares that feeling," the commissioners add reproachfully, "may we suggest they read the quite different testimony at the hearings in Montreal of Jean Dorion, the ex-director of the Société St. Jean Baptiste de Montréal?"
Dorion told the story that day of his friendship with a Muslim woman named Karima, a hijab-wearing immigrant whose family daycare was a home away from home for 18 months for Dorion's infant daughter. Although he hesitated at first because the woman wore "clothing that revealed only her face and hands," the experience turned out to be joyous and rewarding.
That's how the hijab should be greeted day-to-day, according to Bouchard and Taylor - as a possibility to connect with someone with a different way of life.
After all, they note, "the most publicized cases involving Muslims all involved activities where they were participating or integrating into our society: visiting a cabane à sucre, taking part in tournaments (soccer, tae kwon do), wearing the head scarf at public school, etc.
"Would it be wise to ban them for reasons that are, in the end, very superficial?"
It's wrong to think that all veiled Muslim women are somehow under a man's thumb, the commissioners also say.
"There's a strong feminist current among Muslim women. It follows an original path and is a model that differs from Quebec feminism. It goes along with the wearing of the head scarf."
Lest anyone think the veil is a sign of Muslim extremism - even a subtle form of terrorism - the commissioners try to set the record straight.
"A word on fundamentalism and the threat of terrorism," they write. "There is, indeed, among Muslims in Montreal, a small minority of rigorists who are solidly rejected by their religious brethren. It's true that in this type of milieu the germs of terrorism can appear. The threat is therefore not non-existent. What is the right attitude to take?
"Our position is this: Let's let the police do what they can to disrupt the terrorist threat wherever it is - and it does exist. For the rest, as citizens, we have the duty to treat people equitably and without reproach."
Montreal is not Paris, they add - breeding grounds for Muslim terrorists appear to be rare here.
"In Montreal there's little need to worry about the type of problem found in the Parisian suburbs," they say. "Contrary to what can be observed in France, the Muslims who are established in Quebec don't constitute a disadvantaged class that has long been oppressed and pushed to the margins of society.
"They're very educated here and have a great desire to integrate."

Time to change our lingo

The Bottom Line: Use Common Sense