Pierre Karl Péladeau, known as PKP, has been elected leader of the separatist Parti Québécois – and his star quality could give his moribund crew a fighting chance 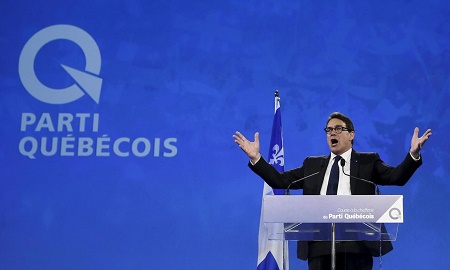 Ice hockey is a religion in Quebec, but since the departure of the NHL’s Nordiques to Colorado in 1995, residents of the provincial capital, Quebec City, have had no icons to worship.

So when Pierre Karl Péladeau – the CEO of Quebecor, Canada’s second biggest media group – announced in 2009 that he would invest C$33m to lease a new arena and bring a hockey club back to the city, he was hailed as a prophet.

Now campaigners for Quebec independence hope that the media magnate can work miracles for their cause after Péladeau’s election as the new leader of the separatist Parti Québécois (PQ).

Thousands of party delegates joined in chants of “PKP” even before victory was confirmed on Friday evening in Quebec City, home of the provincial parliament.

Visibly pleased with his 57.6% share of the vote, Péladeau hugged his wife, the television producer Julie Snyder with whom he forms the ultimate power couple in the province of 8 million people.

“You have given me a clear and strong mandate: to make Quebec a country,” said the 53 year-old in a bilingual speech.

Campaigners for independence have been starstruck ever since PKP joined the ranks of the Parti Québécois a mere 14 months ago, when he launched a successful bid for election to the provincial parliament (a vote which the Parti Libéral won by a landslide).

Péladeau’s public embrace of independence had a galvanizing effect on the separatist cause. Separatists and federalists alike agree that PKP – dubbed “Citizen Péladeau” and often compared to the Italian media magnate-turned-politician Silvio Berlusconi – brought star quality to the PQ.

“Is this the man who will break up Canada?” asked the national public affairs magazine Maclean’s.

In 1999 Péladeau took the reins of Quebecor, the media empire built by his late father, self-made man Pierre Péladeau. Céline Dion and former Canadian PM Brian Mulroney are both godparents to two of his children.

Péladeau is also known for his explosive temper. Tales about his tantrums have become legendary – in and out of the office. He has clashed repeatedly with unions – imposing 16 lockouts during strikes at Quebecor companies – and he has attempted to have labour laws weakened in the province.

But because support from the business elite has historically eluded the PQ, senior members of the left-leaning party appear to have turned a blind eye to Péladeau’s confrontational management style.

They may yet regret that decision, analysts say: PKP’s media holdings are now at the centre of an intense debate.

Quebecor is the largest press and telecommunications enterprise in the province with an empire which includes the most widely read newspaper (Journal de Montréal has 1.2 million readers) and a television network (TVA) that draws the lion’s share of French-language viewership with 30%.

Péladeau resigned as the CEO of Quebecor in 2013, but the politician still owns 72% of voting shares worth at least $600m. He has agreed to put them in a blind trust under one condition: that they would not be sold. “If he has a say on that matter, then it’s not a blind trust,” says legal columnist Yves Boisvert of La Presse, a Montreal broadsheet. “He has to find a solution, and quickly.”

A longtime employee in TVA’s newsroom confirms that Péladeau still has an invisible but pervasive influence on the network. “There is an insidious pressure to feature other Quebecor holdings in our editorial content. Executives are in a difficult position because he might return as their boss if the PQ loses the next election in 2018,” says the employee, who did not want to be named.

While Péladeau rightly insists that he is not breaking any law by owning 40% of the local media, his exceptional case will come under the scrutiny of a parliamentary committee that will review ethics rules next week.

His influence on the local press, however, does not bother supporters of independence, referred to in Canada as sovereigntists. “If his media outlets support independence while the other 60% are federalists, I think that’s fair,” said André-Paul Desbiens, a bus driver and PQ supporter.

But there is a growing sense of urgency amongst ageing nationalists that their dream is slipping out of reach. According to a 2014 survey, only 31% of adults aged 18-24 years old would choose independence. By contrast, 52% of Scottish people aged 16 to 24 years old voted “Yes” in the September 2014 referendum. Voting intentions are similar in Catalonia, where 52% of the electorate aged between 18 and 29 years old would vote for independence from Spain.

Nationalists feel that Péladeau’s forceful personality and achievements can make their goal more tangible, according to poll analyst Youri Rivest. “PKP’s new leadership is the party’s last chance to revive its raison d’être,” predicts the vice-president of the Crop firm.

But sovereigntists may hope that Péladeau moves faster on independence than he did on Quebec City’s hockey team: he has not delivered on his promise to resurrect the Nordiques, and Quebecor – now in charge of the project – has remained quiet.