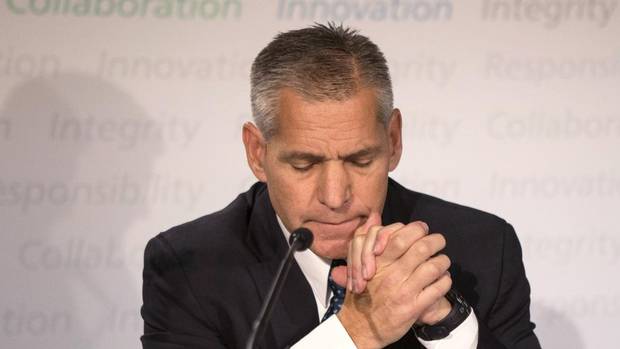 The newly filed application for TransCanada’s $12-billion Energy East pipeline project may as well have been wrapped in a Canadian flag when it was delivered to the regulator. It’s full of talk about freeing motorists in Eastern Canada from their dependence on imported oil from volatile geopolitics locales such as Saudi Arabia, Algeria, Nigeria and Venezuela. That’s the pitch at any rate. The real motivation has more to do with simple economics than it does nation building.
Canada’s oilpatch is bound and determined to find a way to get land-locked Alberta bitumen to tidewater, which would give it entrée to the higher prices that global refineries pay for feedstock. Big Oil is also acutely aware that a major new pipeline project is a critical piece of its huge expansion plans for the oil sands.
The first choice was obviously the Keystone XL project, which would take oil to the Gulf Coast, but the cross-border permissions needed to get that off the ground are proving harder to secure than nearly anyone might have guessed. Enbridge’s Northern Gateway project was next up, but stiff opposition from First Nations and environmental groups continues to keep it in limbo. The back-up plan to the back-up plan now sees oil heading east to New Brunswick, where it can be loaded onto seaborne tankers on the Atlantic.
As might be expected, shipping oil across the breadth of the country is proving to be a harder sell to the rest of Canada than the industry had hoped. It’s why a project that’s really about exporting raw bitumen to foreign refineries is instead being sold as a way to reduce the risks to Canada of buying oil from far-flung producers. According to TransCanada, the pipeline will allow Canadian oil to displace foreign barrels in eastern refineries, a substitution which will ultimately put the country’s energy profile on safer footing.
It’s a nice story, but does it stand up to scrutiny? According to Statistics Canada’s data on international merchandise trade, the countries headlining the worry list are all marginal suppliers. In the first eight months of the year, Saudi Arabia accounted for less than 8 per cent of Eastern Canada’s oil imports. Algeria accounted for less than 5 per cent, Nigeria 1 per cent, and Venezuela didn’t ship any at all.
Refineries in Eastern Canada are of course being supplied by imported oil, but it’s not coming from Middle Eastern dictatorships or revolutionary regimes in South America. By and large, it’s heading here on rail car from the U.S.
Oil production in the lower 48 is soaring, which is great for the industry but also comes with its own challenges for producers. Rules implemented in the 1970s mean unrefined U.S. crude can’t be exported to any other country in the world except for Canada. It’s a legacy of the energy crisis that raises a question about how badly Canadian refineries might actually need the bitumen promised by Energy East. Indeed, a closer look shows that refineries in Quebec and New Brunswick are hardly wanting for feedstock.
The reversal of Enbridge’s Line 9 will mean that Suncor’s refinery in Montreal will be amply supplied, and Valero, similarly, says its refinery near Quebec City will be filled nearly exclusively with North American product by the end of the year. Meanwhile, the Irving refinery in St. John expects to secure more of its feedstock from the U.S. once a second oil-loading terminal is built in the area.
If approved, then, where exactly will the oil being shipped on Energy East end up? In all likelihood, unprocessed bitumen from Alberta would be exported to foreign refineries throughout the Atlantic basin.
Before a major cross-country project breaks ground, however, it’s worth asking whether refiners in Europe, South America or western Africa need Alberta bitumen any more than their counterparts in Eastern Canada.
Oil prices have already dropped to around $80 a barrel and, according to a recent forecast by Goldman Sachs, could average only $75 by the second half of next year.
While those prices aren’t going to cause any existing oil sands operations to shut down, the muted outlook for commodity prices is already prompting large players to shelve plans for new projects. It’s a development that TransCanada and its shareholders need to consider.
Although the company has undoubtedly secured agreements from bitumen producers to supply Energy East, such deals only matter if global oil prices are high enough to provide enough economic incentive to continue expanding oil sands production. If tomorrow’s crude prices won’t cover producer costs and offer a reasonable rate of return, then oil won’t flow, Timing, as it’s said, is everything and Energy East’s is off on two fronts. First, U.S. oil production is now more than enough to supply Eastern Canadian refineries. Second, lower global oil prices indicate that refineries in the rest of the world aren’t exactly scrambling to secure expensive Alberta bitumen either.
A few years ago an economic case could have been made to break ground on a major new pipeline project from the oil sands, but that time has now come and gone.