Where Oil and Politics Mix 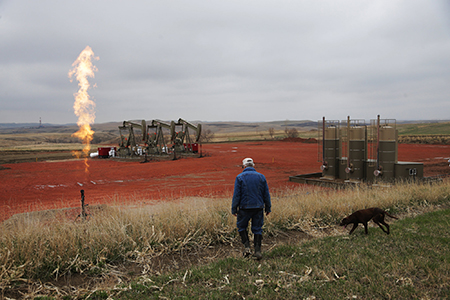 TIOGA, N.D. — In late June, as black and gold balloons bobbed above black and gold tables with oil-rig centerpieces, the theme song from “Dallas” warmed up the crowd for the “One Million Barrels, One Million Thanks” celebration.

The mood was giddy. Halliburton served barbecued crawfish from Louisiana. A commemorative firearms dealer hawked a “one-million barrel” shotgun emblazoned with the slogan “Oil Can!” Mrs. North Dakota, in banner and crown, posed for pictures. The Texas Flying Legends performed an airshow backlit by a leaping flare of burning gas. And Gov. Jack Dalrymple was the featured guest.

Traveling through the “economically struggling” nation, Mr. Dalrymple told the crowd, he encountered many people who asked, “Jack, what the heck are you doing out there in North Dakota?” to create the fastest-growing economy, lowest unemployment rate and (according to one survey) happiest population.

Outsiders, he explained, simply need to be educated out of their fear of fracking: “There is a way to explain it that really relaxes people, that makes them understand this is not a dangerous thing that we’re doing out here, that it’s really very well managed and very safe and really the key to the future of not only North Dakota but really our entire nation.”

Tioga, population 3,000, welcomed North Dakota’s first well in 1951, more than a half-century before hydraulic fracturing liberated the “tight oil” trapped in the Bakken shale formation. So it was fitting that Tioga ring in the daily production milestone that had ushered the Bakken into the rarefied company of historic oil fields worldwide.

But Tioga also claims another record: what is considered the largest on-land oil spill in recent American history. And only Brenda Jorgenson, 61, who attended “to hear what does not get said,” mentioned that one, sotto voce.

The million-barrel bash was devoid of protesters save for Ms. Jorgenson, a tall, slender grandmother who has two wells at her driveway’s end and three jars in her refrigerator containing blackened water that she said came from her faucet during the fracking process. She did not, however, utter a contrary word.

“I’m not that brave (or stupid) to protest among that,” she said in an email afterward. “I’ve said it before: we’re outgunned, outnumbered and out-suited.”

North Dakotans do not like to make a fuss. Until recently, those few who dared to challenge the brisk pace of oil development, the perceived laxity of government oversight or the despoliation of farmland were treated as killjoys. They were ignored, ridiculed, threatened, and paid settlements in exchange for silence.

But over the past year and some, the dynamic seemed to be shifting.

Satellite photos of western North Dakota at night, aglitter like a metropolis with lighted rigs and burning flares, crystallized its rapid transformation from tight-knit agricultural society to semi-industrialized oil powerhouse. Proposals to drill near historic places generated heated opposition. The giant oil spill in Tioga in September 2013 frightened people, as did the explosion months later of a derailed oil train, which sent black smoke mushrooming over a snowy plain.

Then, this year, North Dakotans learned of discovery after discovery of illegally dumped oil filter socks, the “used condoms” of the oil industry, which contain radiation dislodged from deep underground.

It was against this backdrop that on a brisk spring day David Schwalbe, a retired rancher, and his wife, Ellen Chaffee, a former university president, walked headlong into the wind on their way to an F.B.I. office in Fargo.

A mile-long oil train was rumbling through downtown. Wordlessly, Mr. Schwalbe tightened his grip on the black binders bearing what he considered evidence, based on an unusual deal involving his family’s land, that Governor Dalrymple had a corrupt relationship with the oil industry.

‘This has David kind of nervous,” Dr. Chaffee confided. “He comes from a very below-the-radar culture.”