The Dollar Under Siege 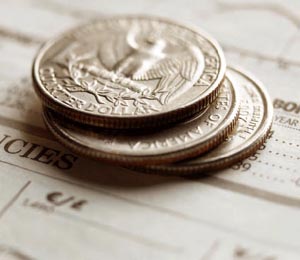 Our main feature today is by Casey Research Chief Economist Bud Conrad, who explores the most urgent narrative in finance that hardly anyone is talking about: the decline of the US dollar.

I don’t mean the dollar’s long, slow slide to zero that began on December 23, 1913 when the Federal Reserve was born. Everyone paying attention knows that the Fed has sapped the dollar of 98% of its purchasing power since then. Criminal? Yes. But not urgent.

I’m talking about Vladimir Putin’s plans to circumvent the dollar in global trade. He, together with China, is making alarming progress toward undermining the dollar’s hegemony and all of the vast advantages the US Empire enjoys because of it.

The US government, of course, has a long history of protecting the dollar’s dominance and won’t let its special privileges go easily. Just for fun, before I pass the baton to Bud, let’s take a peek at the fate of three other prominent figures who dared to challenge king dollar:

- September 2000—Saddam Hussein proclaims that he will sell Iraq’s oil for euros instead of dollars.

- Late 2010—Muammar Gaddafi calls on African and Muslim nations to create a new gold-backed currency called the dinar to challenge the dollar.

- October 2011—Gaddafi is either beaten or shot to death, depending on which report you believe.

- February 2011—Dominique Strauss-Kahn, managing director of the International Monetary Fund, calls for a new world currency to challenge the dominance of the US dollar.

- May 2011—A maid at the Sofitel Hotel in New York accuses Strauss Kahn of sexually assaulting her. Strauss-Kahn loses his position at the IMF. He is subsequently cleared of any wrongdoing.

Russia and China, of course, are no Iraq and Libya. With that backdrop, I pass it to Bud to analyze this latest assault on the dollar, and what it means for your portfolio.

After World War II, the dollar became the world’s preeminent currency. Convertible to gold at $35 an ounce, it was the backbone of international trade. Foreign central banks used it to back their own currencies.

Nixon removed the dollar’s convertibility to gold in 1971, rendering its value dependent on prudent management by its issuer. That issuer, of course, is the Federal Reserve—which conjures dollars into existence to support the US government’s spending habit.

The Fed has issued a lot of dollars since 1971, and even more since the financial crisis of 2008—thanks to Washington’s exploding debt levels. And it’s only going to get worse, as even the Congressional Budget Office (CBO) admits in its own forecasts.

What’s more, CBO debt estimates are notoriously overoptimistic; so while they are daunting, reality will likely be worse. To paint a realistic picture of future US debt levels, I added 20% to the CBO’s forecast, illustrated here:

You can see that US debt will continue its rapid growth that began in 2008. The question is who will fund this borrowing. Historically, foreigners have been a reliable source of US Treasury purchases. But with the US issuing so much debt, foreigners have become saturated with US dollars and so have slowed their buying considerably.

Other buyers of Treasuries have been anemic, too. The banking system holds about $500 billion of Treasuries and hasn’t increased its holdings in five years. With very low interest rates, private investors aren’t buying the bonds either.

That leaves the Fed, under its Quantitative Easing (QE) programs, as the only buyer in town. I expect that the Federal Reserve will continue to be the buyer of last resort and will purchase around $50 billion of Treasuries per month over the next decade.

Admittedly, even the Federal Reserve doesn’t know precisely what its policies will be. It could buy more or fewer Treasuries. But until there is another buyer, the Fed is stuck picking up the tab.

The most important part of this equation is how the Fed buys government debt: it creates new dollars out of thin air and swaps them for Treasuries. That’s called “monetizing the debt,” and it’s inflationary—much more so than when others buy Treasuries with dollars that already exist.

Foreigners Have Stopped Accumulating US Securities

I watch foreign investment in US securities closely, because small shifts are big enough to affect other US markets. In the last 12 months, foreigners have sold Treasuries at an unprecedented rate.

I include the US’s current account above because historically, countries that sell goods to America invest their dollar proceeds in Treasuries. China, for example, sends goods to the US, and the US pays for them with dollars. China then takes those dollars and buys Treasuries. That’s why foreign investment in Treasuries tends to closely follow the US trade deficit. Fracking has allowed the US to produce more energy domestically, helping to improve its trade deficit.

But foreigners are free to do what they want with their dollars. And recently, they’ve been doing anything but buying Treasuries—like buying American companies and Midwest farmland. It’s risky to have so many dollars and dollar-denominated assets in foreign hands, outside of US control.

Other indicators confirm that foreigners are selling US debt. The Fed holds Treasuries in custody for foreign central banks, and its custody holdings recently plummeted by a disastrous $100 billion in just one week. Announcements of sanctions against Russia seem to have precipitated that fire sale. Russia itself has decreased its holdings of US Treasuries from $165 billion to $126 billion. Why should Putin loan the US money when the US is sanctioning Russia’s use of dollars?

Again, since foreigners aren’t buying US government debt, the Fed will have to. That, in turn, increases the quantity of dollars, diluting the value of Treasuries those foreigners already own. Which eventually will induce foreigners to sell even more of their Treasuries, depressing the dollar’s value further.

It’s a risky game, and a potential vicious cycle.

The Dollar’s Importance Is Declining

- The dollar has the unique and special privilege of being the world’s reserve currency, which grants the US several crucial advantages:

- All other currencies are defined by their exchange rate to the dollar.

- Most global trade transactions are denominated in dollars, including the most important commodity of all, oil.

- The US can borrow in its own currency and so can always pay off foreign debts by printing more dollars.

- The US can and has financed wars with dollars loaned to it by foreigners.
In other words, the dollar’s reserve status greatly enhances US power.

This allows the US to run up huge government and trade deficits that would be disastrous for most other countries. Case in point: US government debt is now over 100% of GDP, the level at which Greece became insolvent. The difference is that Greece couldn’t print euros to paper over its government debt, so it was on a much tighter leash.

Because oil is priced in dollars, other countries need dollars to buy oil, even from the Middle East. That’s the #1 reason the central banks of the world have accumulated dollars as backing for their currencies: because dollars are useful for international trade. Plus, the US Treasury market is the largest and most liquid market on earth, so for foreigners, parking money in Treasuries is a logical choice, at least in the short term.

All of those factors helped America dominate the global economy. But other countries are catching up—like China, which is now the clear-cut #2 world economy. The US’s relative economic power has declined sharply in the past 30 years.

Perhaps most importantly, the dollar’s reserve status is in steep decline too. In 2000, the dollar accounted for 55% of all foreign exchange reserves. In 14 short years, that number has dropped to 33%. By 2020, I project, it will drop to 20%. At that point, other large economies of the world won’t need dollars nearly as much for international trade. So America’s special privileges will continue to wane.

China is actively laying the groundwork for its yuan to become the basis for international trade. It already has developed dozens of bilateral agreements to trade with partners without using dollars. China is also acquiring over 1,000 tonnes of gold per year to support the yuan’s growing presence on the global stage. 23 central banks admit to holding yuan, and another dozen hint they hold the currency without officially declaring it.

The US has applied severe sanctions on Iran, forcing Iran’s customers to get creative in figuring out how to pay for oil without US dollars. They tried a number of novel solutions, including using gold via Turkey. But the US squeezed that channel as well.

Now the US is sanctioning Russia—a much more powerful country than Iran—and looks to be shooting itself in the foot. Putin has announced specific plans to move away from the dollar in Russia’s international sales of energy. Gazprom, the Russian energy giant, still prices its natural gas in dollars to sell to Europe. But with US sanctions making it difficult for Russia to do business in dollars, Gazprom has announced it will issue bonds denominated in Chinese yuan. Those two countries continue to grow closer economically, as Russia has the energy that China needs.

Further, Putin, along with the presidents of Gazprom and Rosneft, is actively working to conduct transactions in rubles, yuan, and even Indian rupees. Russia announced a $20 billion deal with Iran to trade oil for goods—including nuclear technology—without using dollars.

The other BRIC countries, Brazil and India, are beginning to wean themselves off the dollar too. The BRICs have set up a development bank and are looking to create their own interbank currency transaction system to replace the Western-controlled Swift program that has been used for decades.

All of these countries are after one thing: to decrease their dependence on the dollar. Using the dollar less in world transactions, of course, decreases the demand for dollars, which decreases its value. That would force America to seriously curtail its trade and government deficits, or else allow the value of the dollar to plummet faster than we’ve ever seen.

Japan, China, the Eurozone, and most other countries are all on the same path of creating money for short-term economic gain, so the dollar’s relative exchange rate vs. other currencies hasn’t changed much. The prices of important commodities like energy, agriculture, and precious metals have risen along with stock markets. While some of these are not adequately included in government measures of price inflation, we’ve seen some price inflation already. More is coming.

The bottom line is that the US is hurting its currency by using it as a political weapon. Shunning Russia only accelerates the trend of countries working to circumvent the dollar.

- A weakening dollar is great for gold.

As Russia expands its energy sales to China, the residual supply available for Europe will be smaller, driving European energy prices higher.
Escalating international conflicts will lead to larger military budgets, increasing future deficits and weakening not just the dollar, but all currencies.
In essence, the new geopolitical strife is just another chapter in the same story that’s been unfolding for decades: the dollar’s hegemony is in decline.

As you may have seen in our documentary video Meltdown America, the snowball effect of economic crises (once they start downhill, they go faster and faster) is what makes them so treacherous. By the time the full impact is felt, most ordinary people won’t even know what hit them.

The Dollar Under Siege