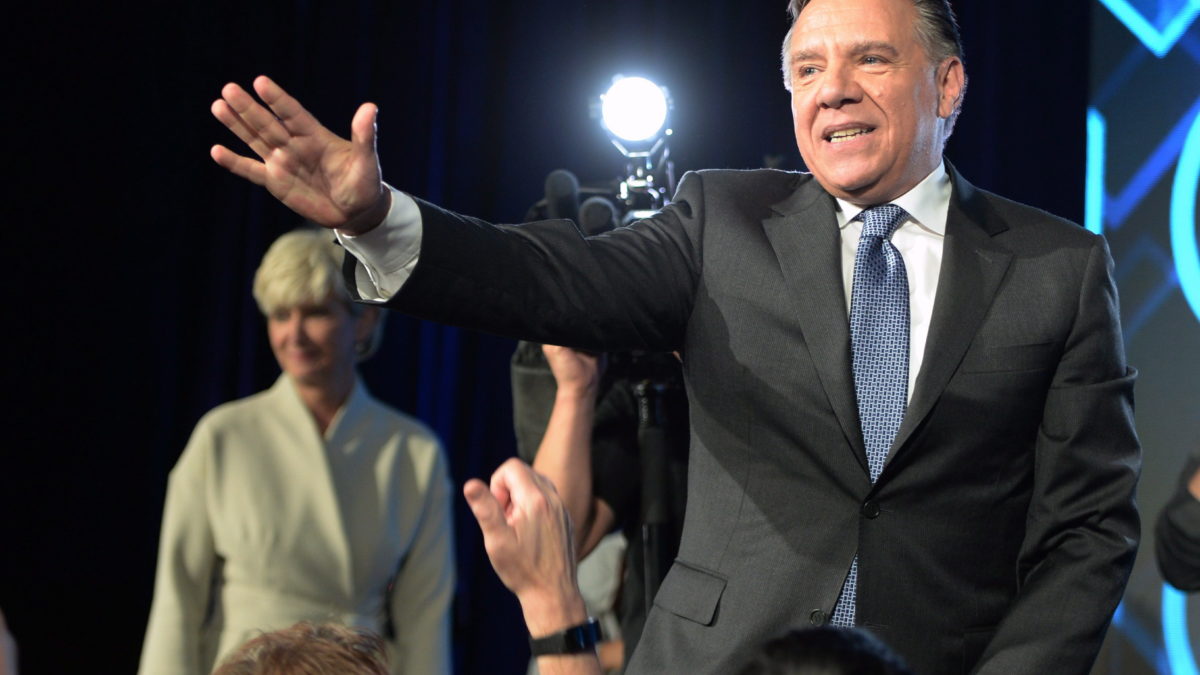 Be careful what you wish for. Quebec’s election may have signalled a turning away from separatism — the mad, doomed project to wrench apart the country on linguistic and ethnic lines that consumed so much of the province’s energy and wealth over the last 50-odd years. But it has been accompanied by a turning toward other forms of zealotry and intolerance.

The Liberal Party and Parti Québécois may have gone down to their worst defeats in their respective histories, dispatched by voters tired of the ancient existential stalemate and the entrenched/corrupt elites that thrived upon it. But into the vacuum have surged parties peddling other fantasies.

Quebec Solidaire campaigned on a platform that might have been stolen from a student union at one of the less prestigious universities, and probably was. It was rewarded with a doubling of its share of the popular vote and a tripling of its seats in the assembly.

And the “conservative” Coalition Avenir Quebec surged to power on a mix of unfunded tax cuts, warmed-over 1970s-style dirigisme and enriched daycare subsidies. Oh, and beating up on immigrants.

The party will protest at that description, but it is not for nothing that they were feted with victory congratulations from Marine Le Pen, the French far-right leader. The party vows not only to slash immigration to Quebec — this at a time of growing labour shortages, in a province where population aging is a particular concern — but to expel those who fail a test of “values” and French language proficiency after three years.

How it would do so, or where they would be deported to, or under whose constitutional authority are among the many questions raised by this odious proposal, to say nothing of the obvious Charter issues. Party leader Francois Legault struggled to explain it during the campaign. But when a voter in Rimouski asked him whether he would fight for “us” against “these immigrants who are erasing us,” Legault was quick enough to reply: “Bien oui!”

If deporting thousands of immigrants was too much for the other parties, on the other great question of the day, whether members of religiously observant minorities should be allowed to work in the public sector, the parties were more in accord than otherwise.

While the Liberals’ Bill 62 would have banned, in the name of “religious neutrality,” covering one’s face, not only for providers but recipients of public services — those wishing to attend school, say, or ride the bus — the other parties would in some ways have gone further.

The CAQ, for example, proposes to ban anyone in a position of authority — police officers, judges, even teachers — from wearing any “conspicuous” religious symbol at work. The party has been admirably clear about what this means: those whose faith requires them to wear such symbols will not only be precluded from being hired for these jobs, but dismissed from such positions as they currently hold.

So to go with mass expulsions of ethnic minorities, add mass firings of religious minorities: the platform, not of some creepy fringe party, but of the newly elected government of Quebec. If Canadians outside Quebec think they can look the other way at this latest manifestation of the province’s famous distinctness, as they did earlier measures banning the display of English in public, they should think again. For it is about to explode in all of our faces.

Bill 62 was already tied up in the courts, the ban on face coverings suspended while its constitutionality is under review. The CAQ’s more sweeping religious bar, should it be passed into law, will quite certainly meet the same fate. But while the Liberals had never indicated they would do anything but accept the courts’ findings, the CAQ leader has again been clear: it will invoke the notwithstanding clause to override any Charter objections.

Perhaps, in the event, we will be treated to the same circus as surrounded Ontario’s recent flirtation with suspending constitutional rights: squadrons of law professors explaining again that this latest demonstration of the clause’s malevolent potential should not be held against it; elderly veterans of the constitutional wars re-emerging to protest that this was not what they intended, either; people who’ve never liked the Charter pointing out, as if it were either new or relevant, that the Charter override is in fact part of the Charter; and so on.

The threat to rights is obvious, and serious

But in one crucial respect this time cannot fail to be different. The federal government could afford to take a pass on the Ontario fight: the override threat came in response to a particularly wonky court decision, soon set aside by an appeals court, after which it was withdrawn; it was far from clear how far the law in question, redrawing municipal election boundaries, offended against rights, as opposed to common sense; and the use of the clause was opposed by every opposition party — and, polls showed, wildly unpopular.

None of these are likely to apply in the present case. The threat to rights is obvious, and serious; it involves no arcane dispute between different levels of government, but blatant discrimination against vulnerable minorities; and yet it is likely to have the support of at least three of the four parties — and perhaps a majority of the Quebec public.

Can the federal government stay out of this? The immediate response from the prime minister was not encouraging. Invoking the notwithstanding clause, he said, is “not something that should be done lightly.” To suppress “the fundamental rights of Canadians” is “something one should be very careful about.” Stop, or I’ll shout ‘stop’ again.

Andrew Coyne: It's time for national leadership on pipelines — that's why we created a federal government