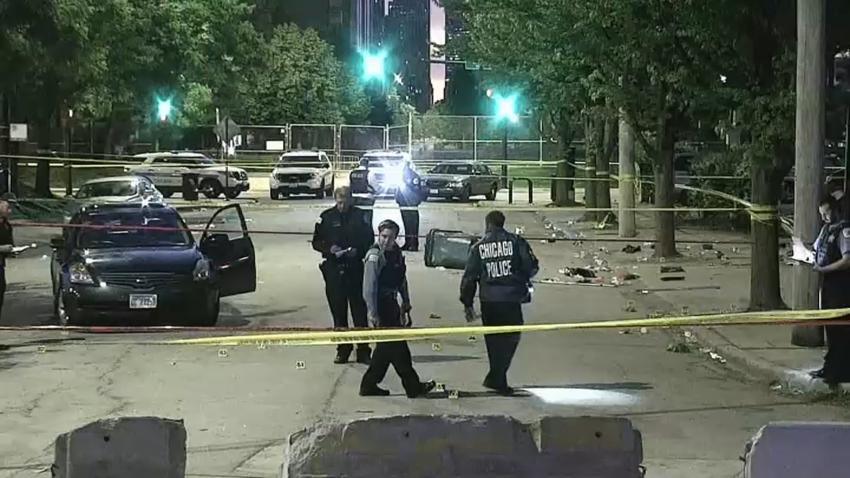 Though largely overlooked and ignored in the now 24/7 mainstream network coverage of racial injustice in America, Chicago witnessed another deadly weekend of inner-city black on black gang-related violence, with over 30 people shot.

"Three people are dead and at least 28 others have been injured in shootings across the city this weekend," a Chicago NBC affiliate reports.

This after on the same Memorial Day weekend that George Floyd was heinously killed by police in Minnesota, Chicago had witnessed a whopping nearly 50 people shot in one of the city's deadliest ever holiday weekends (where ten died from their wounds, including young people).

At a moment "Black Lives Matter" chants can be heard overtaking most every major American city, the now weekly reality of dozens tragically dying in black-on-black crime in Chicago and some other large cities (a trend that tends to increase into the hot summer months) remains a huge 'blind spot' in terms of the current ideologically charged media debate and public discourse.

The mayor has some advice, however:

Chicago Mayor tells citizens to not use guns to defend themselves during riots...urges them to call police instead

It also provides an uncomfortable example and opening for questioning the pervasive narrative of 'systemic' and 'structural' racism, and other core dogmas centered on the idea of rampant minority oppression and 'white privilege'.

These are BLM's sacred dogmas which tend to shut out any dissenting black voice like the below:

I’m a 33 year old black male and I have NEVER been oppressed. I eat, sleep and shit just fine like the next person. I can buy a car, I can buy a home, I can obtain a passport, I can WORK. I love this great country and proud to be an American. DAMN IT I’m not oppressed 🗣

But concerning these sacred dogmas — belief in which inevitably results in advocates necessarily perceiving black oppression everywhere — this is a moment where we should dare to ask the following question: do the core claims of the demonstrators in the streets stand up to empirical analysis and scrutiny?

One man did explore this below in an epic viral tweet thread. Here's what he said:

"I will lose many friends over what I'm about to say. I will possibly be called a racist or even a white supremacist (even though I'm a brown man, who's been beaten to a pulp by neo-Nazis wearing steel toed boots)..."

I will lose many friends over what I'm about to say.

I will possibly be called a racist or even a white supremacist (even though I'm a brown man, who's been beaten to a pulp by neo-Nazis wearing steel toed boots).

But maybe, just maybe, the fact that I am getting 100% of

...But maybe, just maybe, the fact that I am getting 100% of my information from the black scholars in the picture - The Great Thomas Sowell, Glenn Loury, Shelby Steele, John McWorther, Coleman Hughes, Kmele Foster and Thomas Chatterton Williams, allows me some room for thought?

I’ve been watching the narrative play universally over the heinous killing of George Floyd, and the complete and utter lack of facts about African Americans in The US has been infuriating.

Unfortunately, anyone who doesn’t submit to the dominant narrative will be called a heretic, a racist, a white supremacist etc.

Still, I can’t stop myself.

1. Black Lives Matter don’t care about black people. Want evidence? Name me a single time - just once - when they’ve protested against black people being killed by other black people? Whether in America or elsewhere?

Why is this relevant?

Because the biggest cause of death for black men aged 15-45 in USA is... other black men. Compare to white people, where it’s traffic accidents for the younger portion and heart attacks for those over 35.

Or how about the black lives in Sudan, East Timor, Libya?

Why do we only ever hear from BLM when it’s a white person killing a black person?

2. Speaking of which - imagine if white people started doing the reverse. Imagine every time a white person was killed by a black person, there’d be protests, riots, looting and social media campaigns. First thing to notice is that it would be more frequent, because African Americans kill more white people in the US than white people kill African Americans. Now what?

Should we really start applying the race card every time there’s a murder involving more than one pigmentation? Where will it end?

3. Police killings. The video of the murder of George Floyd is so visceral, by showing the casual evil with which officer Derek Chauvin kills George Floyd. People are rightly outraged, and no one can honestly defend the officer, who rightly has been arrested and hopefully will spend his remaining years behind bars (although the prosecutor has been idiotic in moving the case from 2nd degree to first degree murder - a burden of proof they will most likely fail to provide).

But... The only reason people are up in arms about these is that the social media and MSM attention focuses disproportionately on these incidents when the victim is black and the officer isn't. Don't believe me? Let me prove it:

You've all heard of Tamir Rice - a 12 year old black boy who was murdered when brandishing a toy gun. It was all over the news, there were riots and marches, hashtags and universal condemnation all over the media. But how many of you have heard of Daniel Shaver?

A man--he happened to be white--followed precisely the white police officer's instructions as he crawled toward the cop. The cop still shot the man dead. Jury acquitted cop. No one protested, media took no notice, no one even knows about this. https://t.co/3xch6lQPQI

A white man who was showing his friends a scoped air rife used to exterminate birds who entered his store, and was killed for this?

You may remember the case of Sam DuBose, a black man who was shot dead for driving his car away from from the police. The exact same thing happened to before that to Andrew Thomas, a white man driving away from the police. None of you have heard of him.

Alton Sterling was a black man shot dead by the police when reaching into his pocket for his wallet - a travesty.

The same thing happened to a white guy named Dylan Noble. Sterling made national headlines, none of us heard a word about Noble. Loren Simpson was a white teenager who was shot dead by the police in eerily similar circumstances as George Zimmerman killed Trayvon Martin.

Because the only times police killings make the news is when the victim is black and the officer isn't. Here are the FBI, NCJRS and BJS statistics:

For every 10,000 black people arrested for violent crime, 3 are killed by the police.

For every 10, 000 white people arrested for violent crime, 4 are killed by the police.

In 2019, 49 unarmed people were killed by the police. 9 were black. 19 were white. The likelihood for a black person being shot by the police is as high as being struck by lightning.

Sound good, don't they? Such powerful words... and completely inaccurate. First, let's see what the claims being made are:

Yet, when they are challenged, by asking the proponents to provide *evidence* for these, nothing is provided. Name one single law that is targeting exclusively black people. Just one. There isn't one.

If the police is "systematically" anti-black, explain how it is possible that 20% of the Police Force in America is black (African Americans in America constitute roughly 14% of the population, meaning that blacks are *overrepresented* within the police force!)?

Now, imagine how incredibly racist it is to say that the 100,000 plus black police officers are too stupid to know that they are working inside and within a racist institution? That really is racism. And none of them have come out and said anything???

None of them have gone on 60 Minutes and said "We are being trained to be racists"? Seriously?

How about governments? Well, let's leave aside the fact that America just had a two-term black president (whose second name was Hussein, by the way).

Some of America's worst run cities have black mayors, black governors and majority black councils. Look at two of the worst cities in America to be black in: Baltimore and Chicago. Why is it that a place where the people in power are black can be *worse* for the African American Community, than cities that aren't run by black politicians? This is a knock-down argument.

People often look at the economic disparities between blacks and whites, and claim it to be evidence for institutionalized racism. It says something about the power of a narrative, when it has been debunked decades ago - by BLACK ECONOMISTS (like The Great Thomas Sowell) - yet the myth persists.

This is even true within so called races - compare for example Black Americans (generational) vs Black Immigrants... particularly the ones from West Indies (Jamaica, Barbados etc.).

You couldn't tell these people apart, just by looking at them, and whatever racism is in place for one group must by definition be applied for the second group.

But what they have is completely different values and work ethics (the Jamaicans arriving in the US does so commonly to achieve greater heights than what he or she can in their home country). Whatever level of systemic racism exists, they are subjected to it as much as the African American.

Yet, already in the 1970's (!!!), when racism was far more prevalent than it is today, Black Americans from the West Indies were earning 58% more than the Black American whose generations go back centuries in the United States. How could that be, if there's supposed to be such a thing as "systemic racism"?

Disparities are only proof of disparities. Just because Group X doesn't have the same as Group Y, doesn't mean that it's explained by racism.

In 1965, Daniel Patrick Moynihan published his report "The Negro Family: The Case For National Action", where he saw that African American households were 25% single mothers - a frightening statistic that would have devastating consequences. Since then, Jim Crow laws and Red Lining have all been removed from the books, Martin Luther King Jr. and The Civil Rights Movement made tremendous strides and we've now even had a black two-term president.

Now you tell me, which is the better explanation for young black children ending up in a life of crime - the lack of a father figure, or the mythical, non-explainable entity known only as "institutional racism", which for some reasons doesn't apply to Nigerian immigrants, to black immigrants from West Indies, to Indian people, to Jewish people, to Asian Americans...?

Read the rest of the Twitter thread, with source links, here.