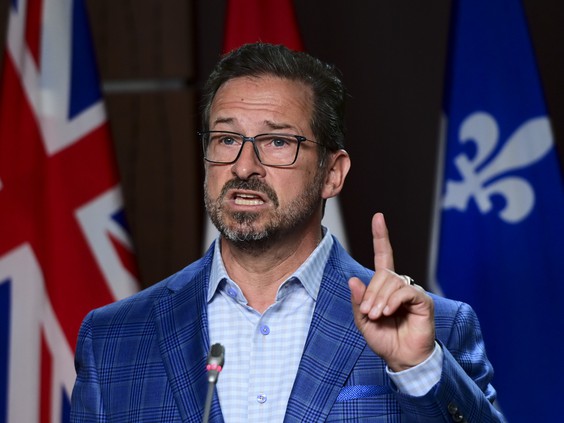 We’re now in the run-up to the three leaders’ debates of the election campaign, of which the first two will be in French this Thursday and next Wednesday, with the one in English the following night. In effect, two-thirds of the six hours of prime time will be in the official language of one-fourth of Canadians.

It’s a uniquely Canadian context. That’s because Thursday’s kickoff debate in Montreal is being produced by TVA, by far the most popular French-language network, which by its own choice is not a member of the broadcasters’ consortium staging the other two events at the Museum of Civilization in Gatineau.

And there lies the opportunity for Bloc Québécois Leader Yves-François Blanchet. Home ice advantage in the first two games of a best of three series. Such was the case in 2019, when as new leader of the Bloc he established himself with Quebec voters and raised its wins to 32 seats, from only 10 in 2015.

There’s a lot at stake for the other three major parties as well. For Justin Trudeau’s Liberals, with 35 of Quebec’s 78 seats, there’s an opportunity to cross the threshold into majority territory of 170 seats in the 338 seat House. For Erin O’Toole’s Conservatives, they need to hold on to their 10 Quebec seats to seriously aspire to forming government, while Jagmeet Singh’s New Democrats hope to grow from their one Quebec seat in Montreal. Most of these competitive races will be off the Island of Montreal, area 514, in the 450 suburbs, as well as 819 in the Gatineau and Eastern Townships, with the real battleground in 418 around Quebec City and the rest of the province.

For Blanchet, his positioning is simple — Québec d’abord. Quebec first, last and always. That hometown vantage point was reinforced the other day when Quebec Premier François Legault disclosed what he wants from Ottawa after the election: more health-care funding, with no conditions from the feds, and a promise that Ottawa won’t stand in the way of Quebec updating its Charter of the French Language, 1977’s Bill 101, with Bill 96 that would expand French first to federally-regulated services such as banks.

Legault is highly popular, both for his Coalition Avenir Québec government’s management of the pandemic and supply management of vaccines, and his outlook on the Quebec question, nationalist but not sovereignist, along the lines of Daniel Johnson Sr. and the Union Nationale of the late 1960s. That’s a popular perspective, particularly beyond Montreal.

As for the leaders of the staunchly federalist parties, Trudeau begins as a favourite son, who at the outset of his career in 2008 didn’t trade on the family name, or accept a safe Liberal seat as his father had in predominantly English-speaking Mount Royal. The son beat a Bloc incumbent in mostly francophone Papineau riding east of downtown Montreal.

O’Toole has the potential of surprising to the upside. As one who started out in the polls running behind “none of the above” and “don’t know” as best prime minister, he can only exceed expectations. And his French, proficient and colloquial, is likely to be an agreeable surprise for viewers.

While Trudeau’s campaign was floundering for the first two weeks, he received a gift at the weekend when anti-vaxxers yelled obscenities at him, forcing cancellation of an event near Toronto, with another disrupted event on Sunday. Dissent may be the essence of democracy, hooliganism isn’t. The incidents may have struck a sympathetic chord among voters for Trudeau, handing him a high card on mandatory vaccinations in the workplace.

Let’s see what the debates bring on that.