Jen Gerson: Thanks for visiting Alberta Prime Minister. But what, exactly, is the point? 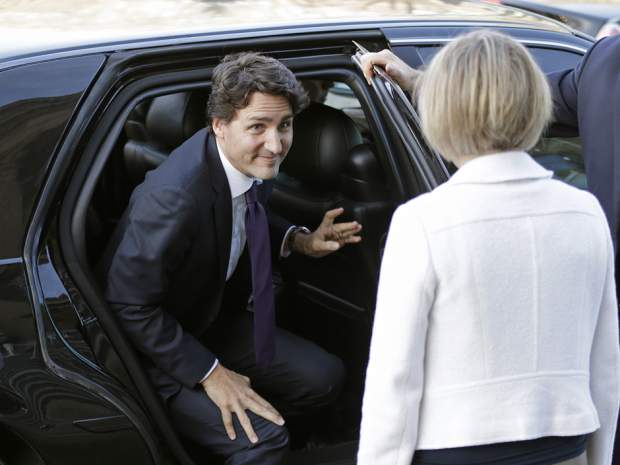 After watching Justin Trudeau pose for a photo op with Premier Rachel Notley in the rotunda of the Edmonton legislature, I was left with one question: What, exactly, was the purpose of the spectacle?
Trudeau deserves points for making the trip to Alberta and actually deigning to meet with the premier — certainly Stephen Harper never bothered. But if you’re going to visit a province to acknowledge what is shaping up as a generational economic crisis, it seems a little odd to arrive without a headline.
And by headline, I mean, some substantive promises. We were hoping for something with a few concrete numbers attached. What we got was a promise that Trudeau is looking into it.
In the meantime, chins up!
“Alberta and Albertans have contributed tremendously to Canada’s growth over the past 10 years and our economy right across the country has benefited,” Trudeau said. “Canadians help other Canadians when they’re facing tough times. That’s just how Canada works and that’s what we’re going to do.”
Hear hear. Well done. And…?
How much infrastructure funding, exactly? Well, Notley said that $700 million had been promised from the previous government and she expected to see some movement on that file within weeks. The government’s finance minister has previously mulled opening up a $250 million stabilization fund, which wouldn’t hurt.

Jen Gerson: Thanks for visiting Alberta Prime Minister. But what, exactly, is the point?

Why leaving Canada makes sense for Alberta, and U.S. would likely welcome a new state