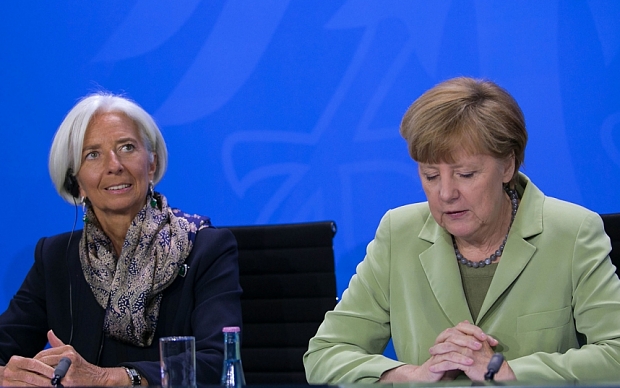 Talks over an €86bn bail-out for Greece have been thrown into turmoil after just four days as the International Monetary Fund said it would have no involvement in the country until it receives explicit assurances over debt sustainability.

An IMF official said the fund would withhold financial support unless it has guarantees Greece can carry out a "comprehensive" set of reforms and will be the beneficiary of debt relief from its European creditors.

The comments came after the IMF's executive board was told that the institution could no longer continue pumping more money into the debtor nation, according to a leaked document seen by the Financial Times.

The Washington-based Fund has been torn over its involvement in Greece - its largest ever recipient country.

The world's "lender of last resort' said it would continue talks with its creditor partners and the Leftist government of Athens, but made it clear the onus of keeping Greece in the eurozone now fell on Europe's reluctant member states.

"One should not be under the illusion that one side of it can fix the problem."

The delay could last well into next year, forcing the other two-thirds of the Troika - the European Central Bank and European Commission - to bear the full costs of keeping Greece afloat.

Athens was forced to request a new IMF rescue package last week after its existing programme - which expired in March 2016 - no longer satisfied IMF conditions to ensure growth and a return to the financial markets for the crisis-ridden economy.

IMF managing director Christine Lagarde escalated calls for a "significant debt restructuring" this week. Debt forgiveness has long been the institution's key condition for extending its involvement in the country after five years of bail-outs.

But Europe's creditor powers - led by Germany - have resisted write-offs, insisting that talks on debt relief can only proceed once the Greek government has satisfied demands to raise taxes, cut pensions spending and privatise assets.

For all Germany's obstinacy, Berlin is determined to keep the IMF involved in a new rescue package. The Bundestag voted to re-start talks over a new Greek deal on the promise that that IMF would remain part of the Troika.

The IMF's position now jeopardises the tentative basis for a new three-year package thrashed out by lenders over a tortuous weekend of talks in mid-July.

The euro fell 0.55pc against the dollar in late afternoon trading to $1.09.

The IMF's position is the latest in a long-line of reports questioning its involvement in an economy with an "unsustainable" and unpayable debt mountain.

Ms Lagarde also voiced doubts the Leftist government could successfully carry out the demands of its creditors. "With the track record of the country, it’s inevitable that there is an element of debt restructuring," said the former finance minister of France.

Greece was originally bailed out with the help of the IMF in 2010, after the institution was forced to argue that Greece represented a "systemic risk" to the global economy.

The news came on the same day the IMF's mission chief for Greece, Romanian Delia Velculescu, landed in Athens for the first time as part of the negotiating teams working for a third rescue.

Creditors were racing to secure an agreement by August 20, when Greece needs €3.3bn to avoid defaulting to the European Central Bank. In the absence of a deal, Athens will require another "bridging loan" from lenders - likely to come from Europe's joint rescue fund.

Prime minister Alexis Tsipras is also battling an internal revolt among his Syriza party over the recessionary measures he was forced to submit to in a July 13 agreement.

sipras delivers a speech at the Syriza party's central committee

Mr Tsipras delivered a firm ultimatum to his restless Central Committee, which is made up of 200 party members, half of whom have already voted to reject the conditions to re-start talks.

He called on them to hold an internal party vote as early as Sunday on whether or not to back his government. Should Mr Tsipras fail to gain a majority, he has said he will call snap elections as early as September. Up to 17 Syriza members resigned from the party following the showdown, according to reports in Greek media.

“Whoever thinks another government and another prime minister would do better should speak up,” said a defiant Mr Tsipras.