Forget Orwell and Rand, We’ve Gone to Full On Plato 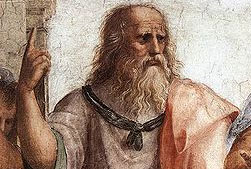 Lately, we hear a lot about Orwell’s “1984″ and Rand’s “Atlas Shrugged” but perhaps the best crystal ball to our current state of affairs is Plato’s Republic. You see both Rand and Orwell were describing a world outside of themselves. A world they couldn’t understand or accept. And while those works are brilliant and incredibly prophetic, I expect that to understand a world borne of narcissistic sociopathy one must examine the construct of such a world by a narcissistic sociopath. Fortunately Plato, perhaps the world’s most (in)famous narcissistic sociopath, provided us a vivid illustration and explanation of his ideal state in “Plato’s Republic”. Plato provides us the why to Orwell’s and Rand’s ‘unideal’ states.
Plato provides the arguments for the philosopher kings. He also describes various levels of reality, arguing that each societal demographic must live within the reality level delegated to them. He argues each demographic has a limited intellectual capacity and thus can only handle the reality level provided to them. With the philosopher kings being the only societal demographic with the right to and capacity for absolute truth. Likewise, the philosophers kings in the world we find ourselves today control each and every aspect of life including our subsequent perception of the world. There is no such thing as happenstance. The market moves a certain direction not because of unexplained market forces but because the philosopher kings have made it so. Economic policies are creating incredible wealth for the already wealthy while destroying the middle class not because of honest misjudgements or the need for more time but because the philosopher kings make it so. The Fed dropped the U3 unemployment rate as a benchmark because it does not meet their standard of truth but expects the rest of us to consider that true unemployment. Declining GDP is ignored while adjusted indicators signalling GDP is healthy are paraded all over the street because the philosopher kings make it so. A Malaysian airliner is shot out of the sky not by things yet unknown but because the philosopher kings make it so.
As in Plato’s Ideal State, today’s philosopher kings are the only ones with the right to and capacity for (as decided by them) absolute truth. The rest of us live within the realities provided for and to us. We are handed the explanations and when the explanations don’t suffice the subject matter disappear altogether; refer to Ukraine, Ebola, Malaysian airliner, Benghazi, Fast & Furious, IRS criminality, NSA, Breitbart and the Constitution, etc. We the people take what we are fed in stride and in line with our respective places in the hierarchy of truth. If we dare challenge the hierarchy of truth, as men like Snowden have attempted, we are exiled with a bounty on our head. Or for minor offences such as providing the truth behind declining same store sales your career is taken from you like Bill Simon, ex Walmart CEO who was fired for stating that Americans are buying less because they have less income than before. The philosopher kings make it so.
The facts are we will never know the facts. We will know but a shadow of truth as ascribed to us by the philosopher kings as described by Plato’s Cave Parable. This is how a handful of men and women control billions of people, the same way 20 cowboys control 30K head of cattle. We are provided food, shelter, safety and fear and in return we are provided a certain reality from which we must live. So long as we remain within our respective realities we will be granted comfort. However, if we attempt to break through a level of truth or worse bring others with us, the heavy hand of the philosopher king will find us by way of the guardian class. In our world we become a threat to national security and once we adorn that scarlet letter all rights that were once guaranteed by the Constitution disappear. The Constitution states no person or law supercedes it, however, by way of executive order the chief philosopher king has granted the philosopher kings a level of authority that supercedes that of the Constitution. And as comfortable cattle do, we paid no attention but strode forward with the herd.
So for those inclined to not only reflect on the prophetic worlds of Orwell and Rand but to understand the arguments for such a world by the philosopher kings themselves, refresh yourself with a read of Plato’s Republic. For wars are won not by force of might but by force of knowledge. Plato was correct in understanding that freedom is found in knowledge. If we accept a shadow of truth we will enjoy a shadow of freedom. But if we fight for absolute truth we will win absolute freedom.