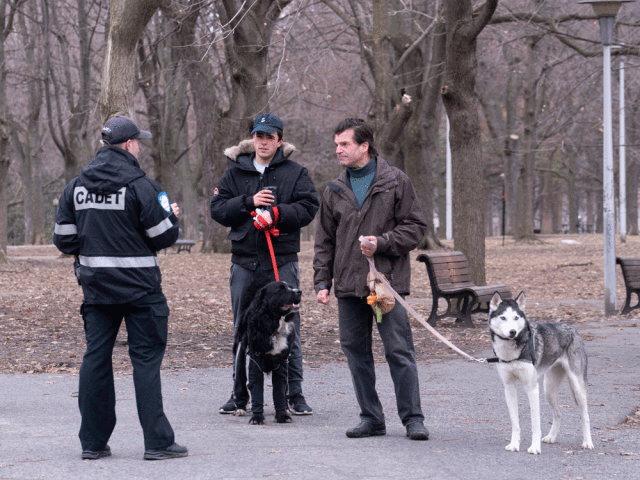 OTTAWA — A civil liberties group is cautioning police and municipal bylaw officers against levelling increasingly draconian fines against people who fail to adhere to social distancing measures, as cities and towns double down on efforts to stem the spread of COVID-19.

Police and bylaw officers across Canada have issued hundreds of fines against people who break social distancing rules, turning unwitting dog walkers into social deviants and sowing confusion over what is acceptable behaviour during the COVID-19 pandemic.

Municipal law enforcement in Halifax, Montreal and Ottawa in particular have slapped residents with harsh penalties in recent days, according to a review of fines in major cities by the National Post. City officials have fined people who rest in public parks or cross through empty soccer fields, and threatened charges against neighbours who attended a social-distancing birthday party from their cars.

“At some point this pandemic, in some jurisdictions, stopped being about public health and started being about public order, because politicians weren’t seeing the behaviour that they wanted out of their constituents,” said Michael Bryant, executive director of the Canadian Civil Liberties Association.

He warned that the still-hazy social distancing measures being enforced across the country could lead to further negligence if people feel targeted, or if government is seen to be overreaching its authority. Various pundits and political observers have warned that the social fallout from overly strict isolation measures could outweigh the health risks themselves.

“When laws are unworkable or indecipherable, people will ignore them,” Bryant said. “When enforcement is unfair and arbitrary, people become less compliant and more defiant. They focus less on trying to obey the rules, and more on trying to not get caught.”

The warning comes amid mounting confusion and frustration over the introduction of stringent social distancing rules, which have been enforced in a patchwork manner across Canadian cities and towns.

Bylaw officers in Ottawa handed out more than 40 tickets this weekend, including an $880 fine for a man who was caught walking his dog. Corey Yanofsky was fined for walking through Ottawa’s Britannia Park, which has been closed to pedestrians in an effort to contain the spread of the virus, according to a report by the Ottawa Citizen. Officers ticketed another Ottawa man $2,000 for declining to identify himself.

As of Monday morning, the Montreal Police Service had issued 67 fines at around $1,546 each, including fees. The Quebec provincial police had filed 157 reports on people as of Monday.

When enforcement is unfair and arbitrary, people become less compliant and more defiant

In the last four days alone, RCMP in Nova Scotia have fined 38 people for offences under the Nova Scotia Health Protection and Emergency Management Acts, according to a press release. Those include $697.50 fines to three people for reasons that police declined to specify, as well as another $7,500 fine against a Nova Scotia business, which RCMP also did not specify in public documents.

Montreal charges included fines worth $1,500 each against a group of 12 youth playing soccer at an outdoor field, according to a report by La Presse. Bylaw officers also threatened fines against Montreal woman Mélissa Leblanc for “disrespecting social distancing,” after a group of Leblanc’s friends wished her happy birthday by driving to her house and honking their car horns. Leblanc had watched the celebration through the window of her home, according to the La Presse report.

The influx in fines feeds into deeper fears that public officials could abuse their newfound powers, as well as bylaw officers and police who already demonstrate overbearing or controlling instincts. Bryant cautioned that there are limits to the efficacy of a more heavy-handed enforcement approach in Canada, even as governments in Western countries extend their powers as a way to battle the virus.

“Unlike China, instant mass behavioural modification is not possible,” he said. “In a democracy, you are not going to get overnight compliance. Trying to police our way out of this pandemic is unimaginative, and sometimes unconstitutional. But it’s definitely ineffective, because when rules don’t make sense people stop listening to people in power.”

Fines in Western cities have also been on the rise.

The Regina Police Service, for its part, issued a $2,800 ticket to a 23-year-old woman this weekend for failing to comply with the provincial health order — the first fine issued by the city for breaking social distancing orders. A spokesperson for the city police said she could not provide further details for the fine, but said it was issued after they were notified about the woman’s non-compliance by the provincial health office.

Toronto police issued nine tickets over the weekend, and bylaw officers issued one ticket, according to the city. Vancouver had received 69 complaints on its 311 snitch line before the weekend, but had not yet issued any fines, according to spokespeople with the city.

In a departure from every other major city in Canada, spokespeople at the Edmonton and Calgary police services did not respond to a request for information about the number of fines issued in their respective cities.

Advocates for more stringent social distancing enforcement are quick to point out that without hard penalties, some people will continue to disregard public safety and flout the rules.

A homeowner in Brampton, Ont., for example, was charged on March 31 for hosting a barbecue attended by roughly 20 other people, which city mayor Patrick Brown called a “complete disregard for the physical distancing requirements of public health.” Brown suggested last week the fine could reach as high as the maximum $100,000. In most cases across Canada, fines are issued by bylaw officers or police, but the total cost of the fines will be determined by the courts.

Brampton spokesperson Natalie Stogdill said residents have been “generally supportive” of social distancing enforcements, and said the city has not received any complaints that she was aware of.

“Our enforcement officers are being reasonable and are attempting to educate the public,” she said. “We’re being very proactive in our communications.”

Bryant at the CCLA said that while individual people may deserve penalties, there are fears that law enforcement will accept those penalties as the new normal and enforce them across the board.

“There’s no backyard barbecue epidemic in Canada,” he said. “Just because there’s a backyard barbecue in Brampton doesn’t mean that everyone else should modify their behaviour to an unreasonable degree, or that they should be fined for actions that were considered innocent one week ago.”