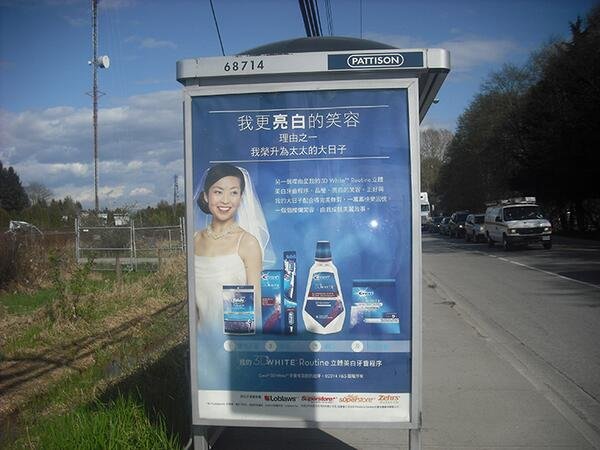 There's another language controversy, of sorts, brewing in Canada.
No, this one is not happening in Quebec — it's taking place on the West Coast, in Richmond, British Columbia.
According to the Richmond Review newspaper, there are rumblings about the thrust of Chinese language signage in that city.
The latest incident came this week when a Crest toothpaste ad was spotted on bus shelter on a busy highway. The sign included text was almost fully in Chinese.
"Telecommunications companies, realtors and banks have used Chinese-only advertisements before — on bus shelters and in direct mail — but such targeted ads for consumer products aren’t as common.
"Kerry Starchuk, a longtime resident who has advocated for English to be included on signs, plans to boycott Procter and Gamble’s products. because of the ad, which she said is also being used in Toronto. And some Twitter users this week wondered what the result would be if the advertisements were used in Quebec, where French language has provincial protection."
Richmond is one of the most ethnic communities in all of Canada. According to city statistics, it has a population of 205,000 — of which over 50 per cent are of Chinese descent.
The city has had these issues come up before.
Richmond Review cites a story from earlier this year, when SUCCESS, a multi-cultural service agency, was pressured to take down its Chinese-only signs.
And last year, we reported on a story about Starchuk and another Richmond resident presenting a 1,000-signature petition to Richmond City Council asking them for rules that would require "a minimum amount of English on any signage, shops or advertising."
While city council voted against a bylaw, Richmond mayor Malcolm Brodie does suggest that the signs make him a little uneasy.
"I am concerned about these signs — the ones that are Chinese-only — but no more concerned than I have been in the past when Chinese-only signs have been referred to us. And our pattern is the same. When we find a sign that is in Chinese-only or any other language only other than English we contact the merchant and tell them that they are not making business sense. They are cutting off part of the market because their ad will only reach a portion of our community," he told CKNW Radio, adding that they have contacted the advertising agency behind the Crest sign.
"This is City Hall not exercising any powers of enforcement because, after all, unless we have some constitutional support for creating a signage bylaw like they have in Quebec we don't have any power to enforce these kind of regulations."
For now, Malcom's rather meek strategy seems to be working.
But you have to wonder if this is an issue that's going to pop up again in cities and provinces across Canada.
According to analysis by Statistics Canada, by 2031, 63 per cent of the population in Toronto and 59 per cent in Vancouver will be "a non-white visible minority" buoyed by immigration and higher birthrates within ethnic communities.
What do you think?
Should cities and municipalities be given the powers to regulate what is written on signage? Should we have our own versions of language police?
Let us know your thoughts in the comment area below.
(Photo via Twitter)