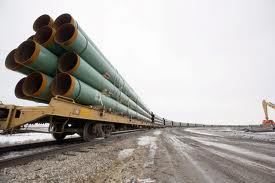 Maybe the best thing for Canada would be President Barack Obama’s ruling against the Keystone XL pipeline border crossing. A turndown would certainly be a bad thing for the Americans, but that’s their business. It might quite help us.
Mr. Obama himself probably doesn’t yet know how he will rule. He knows his environmental base has decided to draw a line in the oil sands, to make this the central action against climate change. The Sierra Club has decided to reverse a long-standing policy against civil disobedience to fight this cause. The New York Times has graciously told Canada to stop. A large portion of the Democratic caucus in Congress is opposed. Opposition Leader Tom Mulcair went to the United States to say that wouldn’t bother him too much.
When the President decides, you can bet domestic politics will weigh very heavily, and the rapidly expanding oil supply inside the U.S. makes our oil less important economically.
If he approves the pipeline, well and good. It would unblock the capacity problem that keeps our prices low, costing Canada as much as $30-billion every year by many estimates, $6-billion to the Alberta treasury alone. That kind of money buys a lot of jobs and health care every year. Keystone would go a long way to remedy that, so Canadian governments press for approval.
A loss would bring great disappointment, but all wouldn’t be dark. It would also have the salutary effect of forcing us to immediately contemplate our great vulnerability in having only one customer for what’s by far our largest export. Keystone would have cemented that dependence even further.
That single customer has had us over a barrel on pricing because we have no alternative. Our oil currently is landlocked. The solution is dead obvious: Build pipelines across Canadian territory to the Atlantic and Pacific from whence it can be carried to any customer in the world, at top world prices.
So far, Canadians have declined to bite that bullet. We’ve been doing well by selling the raw product to an industry dominated by giant U.S. refineries. But now that comfortable situation has been changed by a combination of technological progress in the production of domestic U.S. oil and the pipeline crunch. So if there’s no Keystone, we have to react – or accept a somewhat lower standard of living. That’s a thought that’s perhaps politically even more powerful than opposition to new pipelines.
Some British Columbians who don’t want to see new oil lines to the Pacific believe our Premier when she says we’re all going to be rich anyway from B.C.-produced liquified natural gas exported to Asia. Don’t take that to the bank. Australia and Qatar are way ahead of us in these markets, with first mover advantage. New undersea methane-hydrate discoveries by Japanese explorers open the possibility that Japan could soon become self-sufficient in the very gas we’d like to sell them.
Oil will remain our trump card for the foreseeable future. So which way to go? The pipeline to the Atlantic is a no-brainer. Just get it built. The politicians are all agreed this is a good thing, with the possible exception of Quebeckers, who might have to accept a bit of reality therapy on this issue.
The Pacific pipelines present an even stronger opportunity, given the immense Asian markets. The Northern Gateway proponent, Enbridge, has screwed up its public relations in a textbook case of incompetence. The southern Kinder Morgan line faces intense opposition regarding increased tanker traffic in Vancouver Harbour.
But the northern line has a win-win solution in the recently proposed Kitimat refinery. It would take the crude out of tankers and convert it into much cleaner gasoline and diesel, vastly reducing spill worries as the refined product ships are smaller and the cargo evaporates if an accident happens. It would give thousands of enduring union jobs and upgrade our natural resource inside Canada, making us players in world refining on the Pacific.
The B.C. government has received a study saying this is viable. What remains is getting the crude to the coast. In extremis, it could come by existing rail at a tolerable cost. More desirably, the federal government could reverse its disgraceful lack of attention to aboriginal claims, the major barrier to the northern pipeline.
In short, with co-operation, some vision and some smarts, a Keystone rejection might make some good things happen.

A change in the balance of power

A change in the balance of power