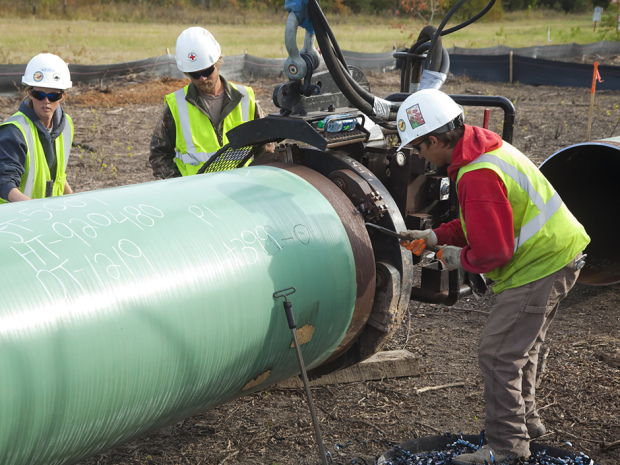 MONTREAL – The head of one of the world’s largest petroleum producers says he believes pipelines such as TransCanada Corp.’s Energy East are the only viable way to develop Alberta’s oilsands.
“I can only encourage Canadians to develop your own infrastructure and not to complain about the U.S. not accepting the Keystone (Pipeline System) if you cannot develop your own pipelines to the east or to the west,” said Total S.A. CEO Patrick Pouyanné, speaking at the International Economic Forum of the Americas in Montreal on Tuesday.
Pouyanné said that one of the biggest challenges facing Alberta’s oilsands is the logistical difficulty of transporting crude from the landlocked territory.
“If you don’t have the pipelines, the oilsands will be stuck there in Alberta and it will be a real problem,” he said.
Despite opposition from a number of environmental groups, Pouyanné says he believes pipelines are a safer way to transport crude oil than by rail.
“Frankly, I don’t think it’s progress for us to transport crude by train in the 21st century,” he said.
Total has two oilsand projects, including the massive Fort Hills, through joint ventures with Suncor Energy Inc., which have been grappling with high production costs and low oil prices, along with competition from rising U.S. shale oil production.
“If you have less cash to invest, you will look to these types of resources very carefully,” said Pouyanné.
He said costs are also high in Alberta because of the number of projects that have been built in the past decade, without the additional infrastructure to support them.
“We all rushed to Alberta. It was a new gold rush. Because everybody wanted to build plants, the costs have skyrocketed,” said Pouyanné.


If you don’t have the pipelines, the oilsands will be stuck there in Alberta and it will be a real problem

Suncor, however, is spending as much as $1.6-billion this year as construction increases on the Fort Hills joint venture, one of the most ambitious mining developments in years.
The $13.5-billion venture is set to pump its first oil in 2017, adding 180,000 barrels a day of new capacity in northern Alberta over time.
“We have to continue carefully and we need to make efforts to enhance the competitiveness, otherwise I suspect we will not reach the level of production we announced some years ago,” said Pouyanné.