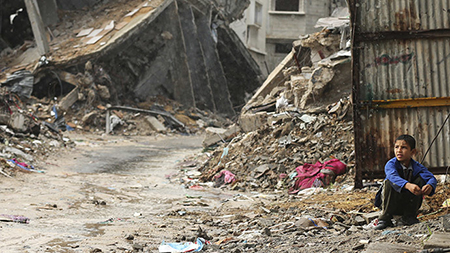 The largest-ever protest by Israeli top brass has taken place, with at least 105 retired generals and intelligence chiefs writing a letter to premier Benjamin Netanyahu, urging him to “initiate a diplomatic process” for peace with Palestine.

"We, the undersigned, reserve IDF commanders and retired police officers, who have fought in Israel’s military campaigns, know firsthand of the heavy and painful price exacted by wars…. Here we are again sending our children out onto the battlefield, watching them don their uniforms and combat vests and go out to fight in Operation Protective Edge,” the letter read.

A few of those who signed the letter told the state Mako-Channel 2 News that, in their opinion, Israel had the strength and means to come to a two-state roadmap to get out of the current crisis.

The agreement wasn’t reached due to “weak leadership,” the country’s top brass added.

“We’re on a steep slope toward an increasingly polarized society and moral decline, due to the need to keep millions of people under occupation on claims that are presented as security-related,” reserve Major General Eyal Ben-Reuven told the channel.

“I have no doubt that the prime minister seeks Israel’s welfare, but I think he suffers from some sort of political blindness that drives him to scare himself and us,” he added, Haaretz reported.

The idea of writing the letter belonged to reserve Major General Amnon Reshef, who said in an interview he was “sick and tired of a reality of rounds of fighting every few years, instead of a genuine effort to adopt the Saudi initiative,” Ynetnews.com quoted him as saying.

He referred to the Saudi peace plan adopted in 2002 that offered full peace for Arab states and Israel. Tel Aviv, in turn, was to withdraw to borders based on the pre-1967 armistice lines.

Among the signatories to the protest, 101 are IDF veterans with the rank of brigadier or major general, two are ex-chiefs of the Mossad intelligence agency and three former commanders of Israel’s National Police, Haaretz reported.

It’s not the first collective effort of the Israeli top brass to urge the country’s leadership to step up the peace drive.

For instance, almost three years ago, 52 former generals signed a petition calling for a law to make military or equivalent national service compulsory for men who practice Haredi Judaism.

And in November 2011, 19 ex-top brass urged the IDF chief of staff Benny Gantz to fight against increasing religious extremism in the military forces.

The latest letter comes a week after Prime Minister Benjamin Netanyahu announced plans for around 1,000 new settler homes to be built on occupied Palestinian land. This triggered an alarmed response from the Palestinian authorities.