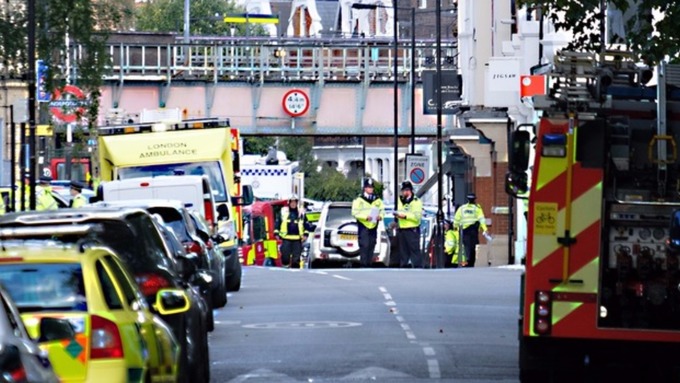 The UK's terror threat level has been downgraded from critical to severe after the arrest of two suspects over the explosive attack on Parsons Green tube station.
Home Secretary Amber Rudd said there was no longer a risk of an imminent attack as she hailed "good progress" into the investigation.

It comes as reports suggested that an 18-year-old man arrested in Dover in connection with the attack was an Iraqi orphan who moved to Britain several years ago.
Ian Harvey, a politician in Sunbury, Surry, said he had learnt of boy's background from neighbours of the foster parents and publicly available information.
"One thing I understand is that he was an Iraqi refugee who came here aged 15 - his parents died in Iraq," he said.
Another man, aged 21, was also arrested on Sunday morning under section 41 of the Terrorism Act.
Thirty people were injured when an improvised explosive device caused a fireball on a District Line carriage at Parsons Green station on Friday.
Hours later, the terror threat was raised to 'critical' - meaning that an attack is feared to be imminent - from its previous level of 'severe'.
Today Mrs Rudd said that authorities were standing down extra protections following the arrests.
She added: "Severe still means that an attack is highly likely so I would urge everybody to continue to be vigilant but not alarmed."
Speaking earlier on Sunday, Ms Rudd said it did not appear that the bomber was a lone wolf, but added that it was "too early to reach any final conclusions on that".
Witnesses described seeing the 18-year-old suspect being detained in the departure area of Dover ferry port, which was temporarily evacuated.
Police are continuing to search a foster home in Sunbury-on-Thames, Surrey, in connection with the teenager's arrest on Saturday.
Residents on Cavendish Road were forced to evacuate as police raided the address of Penelope and Ronald Jones - a respected foster couple.
The pair were awarded MBEs in 2009 for services to children and families, and are said to have fostered up to 300 children over 40 years.
Police are also searching a residential address in Stanwell, Surrey, in conjunction with the arrest of the second 21-year-old suspect.
Metropolitan Police Assistant Commissioner Mark Rowley said the investigation into the bombing was continuing at a "rapid" pace, and authorities "are getting a greater understanding of the preparation of the device".
He said although the terror threat level had been downgraded, "for practical and precautionary reasons" there were be an increased level of policing, with assistance from the military, into the beginning of next week.
Of the 30 people injured in the bombing, all but one have been discharged from hospital, with a remaining patient being treated at Chelsea and Westminster Hospital, which has a specialist burns unit.