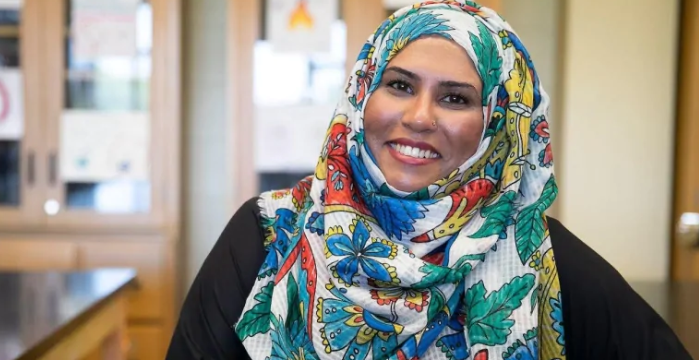 Across the country, students and teachers are saying goodbye to summer and returning to their daily school routine.

But in Quebec, the new school year is anything but routine since the passing of Bill 21 in June.

The controversial religious symbols law bans some public servants in the province — including teachers — from wearing kippahs, turbans, hijabs and the like.

When the bill was introduced, three Montreal school boards vowed to oppose it. But as the school year begins, they have changed that stance and will now comply with the law.

Nadia Naqvi is the co-founder and president of the Muslim Teachers Council of Quebec and a high school teacher in Montreal. She also wears a hijab.

As It Happens host Carol Off spoke to Naqvi about Bill 21 and her board's decision to comply with the law. Here is part of their conversation.

How do you feel going into a new school year knowing that these school boards in Montreal won't fight Bill 21 as they had promised they would?

I can speak for myself and a lot of teachers, whether they wear religious symbols or not, that we feel betrayed.

We heard from people in the spring. They were determined. They were not going to give in to this. They believed it was a violation of people's rights. What do you think caused these boards to finally cave?

Political pressure. That's all it is. The fear of what's going to happen when the school boards are abolished.

Particularly for the English-language school boards, we have a lot at stake.

I am a minority. But I'm also a minority within a minority because I worked for an English school board.

When they told you that they would fight it, what did that mean for you?

Oh, it made me very proud. But I was anticipating this because while I am an idealist, I am also a realist, because I've been with my board since 2006. I know how it works.

You've been a teacher for 13 years. You wear a hijab. You're on medical leave right now. But Bill 21 is being grandfathered in. So how does it really affect you?

Essentially, I am professionally stuck. Had I not gotten sick, my plan was to, in another year or two, begin the works to become an administrator.

But if the idea of this law was that it would not affect those who are already employed, who are wearing any religious symbols, it would only be applied to new employees who joined, why is it that this has such an impact on your career?

Because the grandfather clause essentially means we will remain where we are. We're frozen for the next however many years.

For sure, we cannot get a promotion. So I cannot become an administrator because that is considered a promotion.

Back in June, we spoke with a member of the Quebec English School Board Association, Russell Copeman, and he described Bill 21 as "Kafkaesque." He said, among all the other things that are wrong with it, it will be "impossible to enforce." So what is it going to be like in schools like yours as they try to apply this new law?

It's impossible to enforce, so basically they're going to bully us into enforcing it.

And this is a really bad example to set for the children that we teach. It's basically saying that it's OK for your government to be a bully, but it's not OK for you guys. Essentially, they're saying: Do as we say, not as we do.

They've talked about a secular police. Are they going to march in with their badges and say, "Hey you, what's your name? Are you permanent?"

How does that work? And what example does that set for me being interrogated like that as if I am a criminal in front of my students?

I get chills even thinking about it.

You know that this law is very popular in the province of Quebec. In fact ... a group of 50 parents signed a letter published in Le Devoir newspaper saying they want their kids to have a right to a secular education and that there should be a process to allow students and parents to ensure those rights by saying that they could change a class if there is a teacher like you teaching their kids — that they could request a transfer. What do you make of that letter?

Just because a bunch of parents got together to write an open letter in Le Devoir is peanuts compared to the thousands of sites and online petitions saying that they did not care whether their teachers wore religious symbols or not.

When parents talk about a secular education, they clearly are not paying attention to the actual education that their children are getting. I teach science. I have no time in my classroom to go into any type of dogma with my kids.

And if my kids do ask, "Ms., why do you wear a hijab?" I say, "You know what? That's a good question. I appreciate you asking me. Come back at recess." And they do, off school time, because I am a professional.

Now these parents, somehow, they feel like as if we are not at par with our white colleagues, with our colleagues that are Christian, etcetera — those that choose in their daily lives not to show their religion.

Respect is something very non-secular. Now these parents need to teach themselves and teach the children that respect is all about human rights. It's not about whether something is secular or not.

Would you ever consider not wearing your hijab in order to further the career that matters so much to you?

Never. I have three parts to my identity. I am a mother, I am a teacher and I am also a woman and a wife.

If someone were to ask me, "Well, you have to divorce your husband to continue teaching." No.

"Would you rather be a mother or a teacher?" No.

I will not give up one part of my identity, which I love, to continue doing something else that I love. I will keep fighting. This is a fundamental human right. The government cannot do anything that will ever persuade me to take off my hijab.

That is not their decision. It is mine. No one forced me. They cannot force me.