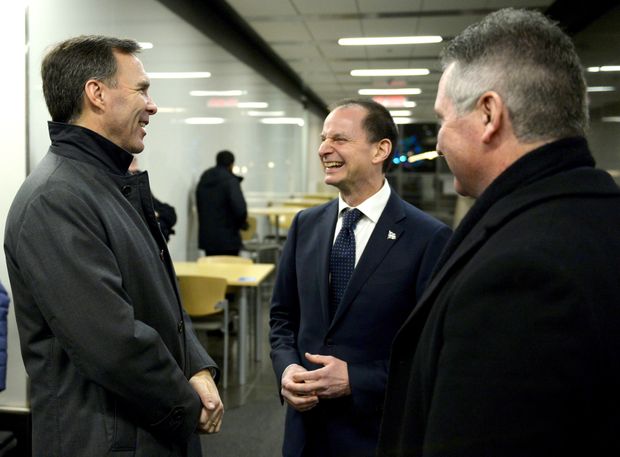 Quebec will receive $13.1-billion in equalization payments next year – a $1.4-billion increase – while Alberta, Saskatchewan and Newfoundland and Labrador continue to be left out even though Canada’s oil-producing provinces are facing deficits and hard times.

The Finance Department released the federal transfer figures for the 2019-20 fiscal year on Sunday evening just as Mr. Morneau prepared to host his provincial and territorial colleagues for dinner and then a day of meetings on Monday in Ottawa.

The equalization system is part of the Canadian Constitution and is aimed at ensuring provinces can provide reasonably comparable levels of public services at reasonably comparable levels of taxation. But the formula’s details are highly complex and have been revised over time. It is a frequent source of tension between the “have” provinces and the “have not” provinces that receive the payments.

Four other provinces will receive equalization payments next year, including $2.3-billion to Manitoba, $2-billion each for New Brunswick and Nova Scotia and $419-million for Prince Edward Island.

The governments of Alberta, Saskatchewan and Newfoundland and Labrador – where government finances are heavily influenced by the state of the energy sector – are all running budget deficits.

In contrast, Quebec’s recently elected Coalition Avenir Québec government announced last month that the province’s finances for the year were sitting at a $3-billion surplus, although it later cautioned that the year-end figure could be lower.

Quebec’s finances are less rosy when it comes to debt. While the province is working to lower its borrowing costs, it still has the second largest ratio of net debt to gross domestic product ratio.

Saskatchewan Premier Scott Moe led a push to change the program in June in response to a federal budget bill that renewed the equalization program for five years under the existing formula. Mr. Morneau insisted that no province should have been surprised because they were informed of the renewal at the December, 2017, meeting of finance ministers.

“With a stronger GDP, we’ll have lower public debt and lower equalization payments, but this will take time,” he said.

Mr. Morneau said there are other federal programs that are better suited to helping provinces with short term economic challenges, such as the federal stabilization program and Ottawa’s decision to purchase the Trans Mountain pipeline and related assets.

“I’m sure we’ll have a discussion, but we all recognize that this is something that has been renewed for five years after considerable discussion already,” he said Sunday.

In addition to equalization and the troubled energy sector, the ministers are also expected to discuss cannabis taxes and imminent increases to the Canada Pension Plan.

The meeting comes on the heels of Friday’s first ministers’ meeting in Montreal where Prime Minister Justin Trudeau faced sharp criticism from the premiers of provinces that oppose the federal government’s plan to set a national price on carbon emissions in 2019.

Over the years, the December gathering of finance ministers has been the main forum for negotiating changes to the CPP, which is the joint responsibility of Ottawa and the provinces. After several years of negotiations, the forum of ministers agreed in 2016 to expand the retirement savings program with changes that will start to be phased in on Jan. 1, 2019.

'Them' and 'us' split spreading nationwide, federal officials warn