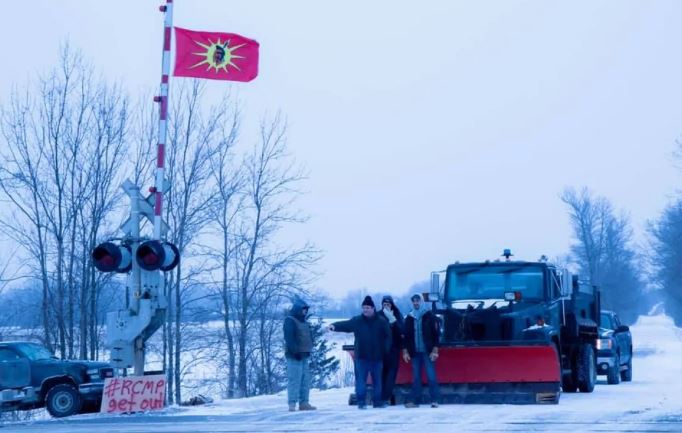 The blockade started Thursday evening east of Belleville, Ont., hours after an RCMP raid to enforce a court injunction against camps set up by Wet'suwet'en opponents of the Coastal GasLink pipeline led to six people being arrested.

Photos from the scene of the protest near Belleville show a dump truck with a snowplow parked next to the rail line. The words "RCMP get out" are scrawled on a piece of plywood.

"Those people never had a treaty with Canada. Canada can't claim it's their land unless they have a purchase receipt with the Crown," said a statement from the group on Thursday.

"Our position is they are our brethren. We have a relationship with them, and we support them in protecting their territory."

As of 11 a.m. Friday, Via Rail said parts of 16 separate trips routes had been cancelled. Trains travelling between Ottawa and Montreal are not affected.

Ontario Provincial Police say they are also aware of the situation, but did not offer more details.

The $6-billion, 670-kilometre Coastal GasLink pipeline has received approval from the province, and 20 First Nations band councils have signed agreements in support of the project, including five of the six band councils in the Wet'suwet'en nation.

However, the Wet'suwet'en hereditary chiefs say those band councils are only responsible for the territory within their individual reserves because their authority comes only from the Indian Act.

The hereditary chiefs — who are the leaders of the nation's governance system in place before the imposition of the Indian Act — assert authority over 22,000 square kilometres of the nation's traditional territory, an area recognized as unceded by the Supreme Court of Canada in a 1997 decision.

Opponents of the pipeline point out that B.C. has passed legislation to implement the UN Declaration on the Rights of Indigenous Peoples, which says "Indigenous peoples shall not be forcibly removed from their lands or territories."

On New Year's Eve, a B.C. Supreme Court judge granted Coastal GasLink's application for an interlocutory injunction that restrains people from barring workers from getting through their checkpoints.

With files from Jorge Barrera and The Canadian Press