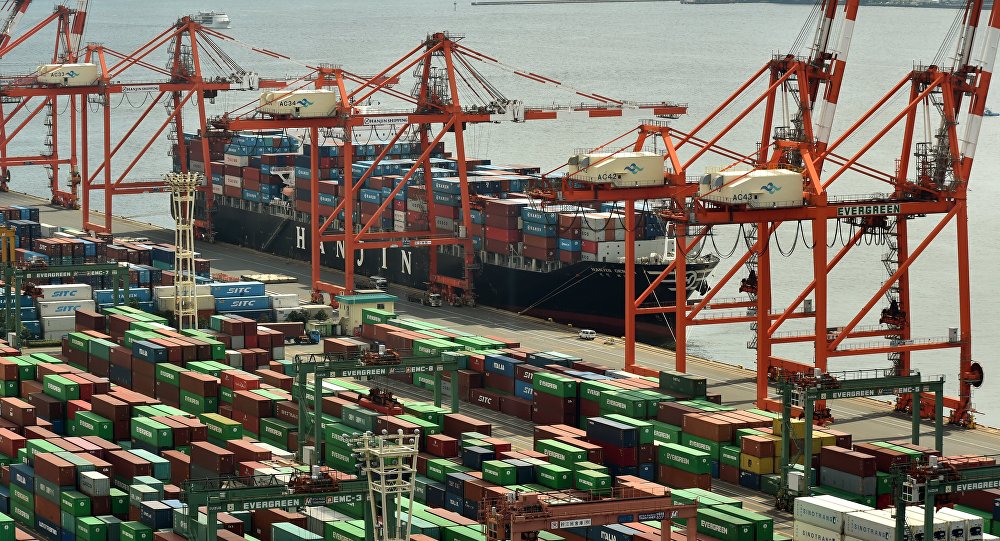 TPP is a geostrategic deal between the US and Japan to contain China, attempting to shape an Asia-Pacific economic zone that might at least balance the second-largest economy on the planet.
Everything you need to know about the incessantly ballyhooed Trans-Pacific Partnership (TPP) deal comes directly from the lion's mouth.
Here's US President Barack Obama: "When more than 95 percent of our potential customers live outside our borders, we can't let countries like China write the rules of the global economy. We should write those rules, opening new markets to American products."
So Exceptionalistan must imperatively rule the trade — and war — waves if this ever shapes up as America's "Pacific Century". "Ruling", in this case, applies to a selected Pacific melting pot: the US and Japan, plus Australia, New Zealand, Brunei, Canada, Chile, Malaysia, Mexico, Peru, Singapore and Vietnam.
Predictably, the usual corporate media suspects have been ecstatic over what's supposedly "the largest free trade agreement in history."


Reality spells otherwise. For starters, TPP — as Obama himself bragged — is a sort of Pacific NATO on trade; the economic/commercial arm of the "pivoting" to Asia, part of the overall containment of China strategy. Needless to add, Beijing is not part of TPP.

No one really knows anything about key TPP arcane provisions because TPP is an ironclad secret, negotiated behind ironclad rooms similar to those "green rooms" in WTO negotiations. If you, as a negotiator, had read the drafts and talked about them, you'd end up in jail. The Obama administration has been particular NSA-style paranoid on all things TPP.
Why the secrecy? Simple; because global trade is actually a key segment of global war. The negative impact of allegedly "free" trade on countless helpless communities across the Global South equals war, as detailed in the crucial book Trade Is War: The West's War on the World.
Gotta protect my biologics
TPP is essentially a geostrategic deal, with trade overtones, between the US and Japan to bypass/contain China, attempting to shape an Asia-Pacific economic zone that might at least balance the second-largest economy on the planet (and in a few years, the first).
Most of all, TPP is the ultimate gift for major US corporations, as the treaty aims to smash all sorts of tariffs and regulations in every domain from banking, finance and insurance to IT, media, entertainment and — the Promised Land — Big Pharma.
A White House TPP fact sheet gives the game away; "TPP lifts complex restrictions and bans on access for US businesses-including many small businesses-that export American services like retail, communications, logistics, entertainment, software and more."
So this implies unlimited reign of American soft power for the foreseeable future. With that, certainly, China cannot compete.
As for the Big Pharma bonanza, it's summarized in this piece co-authored by Nobel Prize winner Joseph Stiglitz:


"The TPP would manage trade in pharmaceuticals through a variety of seemingly arcane rule changes on issues such as ‘patent linkage', ‘data exclusivity', and ‘biologics.' The upshot is that pharmaceutical companies would effectively be allowed to extend — sometimes almost indefinitely — their monopolies on patented medicines, keep cheaper generics off the market, and block ‘biosimilar' competitors from introducing new medicines for years."

So the turbo-capitalist pattern remains the same: total corporate protection; a concerted offensive against state-owned enterprises; and the completely arbitrary reign of the dreaded investor-state dispute settlement (ISDS) — clauses that allow Big Business to sue any member country for any profits allegedly "lost" due to government regulations. For nation-states, it's our (corporate) way or the highway.
"Biologics" — medicine derived from living organisms — was a big deal in TPP's long secret discussions. Translation; the losers will be consumers relying on generic medicine, the winners with mega profits will be the likes of Pfizer.
There will be resistance — especially popular resistance. It's organizing itself in Peru and Chile. And in Japan, agriculturists will be up in arms against what they perceive as the coming invasion of US corporations.
TPP is not the letter of the law — yet. Each member country must ratify it. The final drafting won't be ready before at least the spring of 2016. The US Congress will put up a nasty fight — not because they're anti-corporate, but because they're anti-Obama.
China can wait
So there's nothing "free" about TPP, as Stiglitz stresses. The "free trade" notion itself is a myth, as the US, for instance, historically accumulated wealth via hardcore protectionism.
In fact TPP, if approved, is bound to increase inequality in Asia-Pacific. As the Trade is War book argues, trade, like war, does create refugees — running away from the corporate davastation of their local businesses. In Africa, many of these trade-related "new poor" have been driving migration to Europe through Libya.
Beijing knows what's at stake with TPP, but remains cool, calm and collected. To entice not only Asia-Pacific but also the Global South, China may rely on the Asian Infrastructure Investment Bank (AIIB); 57 founding members, including Malaysia, Singapore and four other TPP nations. Washington and Tokyo, remember, are anti-AIIB.
TPP, if approved, could delocalize factory jobs out of China and into Vietnam and Malaysia. Not a big deal for China, because this is already happening anyway, and what Beijing is aiming at is to excel in the next ladder of skilled jobs — as in consolidating the Silicon Delta in the former "factory of the world" Guangdong province.
China has also been investing on clinching key bilateral trade deals with, for instance, Australia and South Korea. Moreover China has its own TPP; that's the Regional Comprehensive Economic Partnership (RCEP), which I analyzed here; the 10 members of the Association of Southeast Asian Nations (ASEAN) plus Australia, India, Japan, New Zealand and South Korea.
"Pivot to Asia"? Who cares? China is already the major trade partner of virtually everyone in Asia. As for not writing the rules of Asia-Pacific trade, China can wait. Profit from it. And rewrite the rules when the Asian century fully blooms.