Erin O'Toole's French Connection: How a successful leadership strategy in Quebec could be his roadmap next election 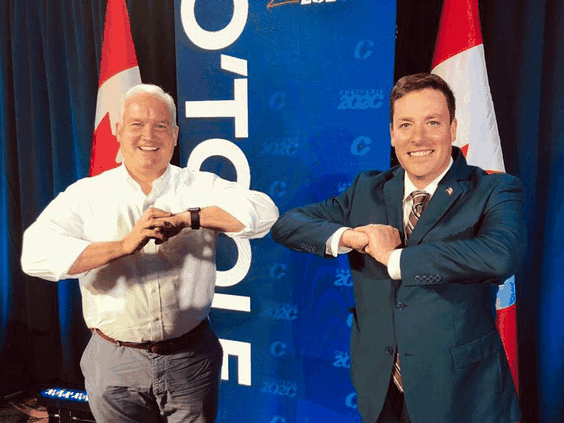 'We were the only national campaign who offered a unique set of promises to the province. We chose issues that were close to Quebecers’ hearts'

OTTAWA – In the earliest days of the Tory leadership race in December 2019, soon-to-be candidate Erin O’Toole approached influential Conservative Quebec Senator Leo Housakos to have him join his campaign, set to launch the next month.

“I said to him that I wouldn’t support him. I didn’t think his French was good enough,” Housakos revealed in an interview.

But by the early spring, Housakos was so impressed by the improvement in O’Toole’s French skills that when he was approached again his answer was a clear oui.

The senator’s change of mind about O’Toole mirrors the larger story of how the leadership race evolved in Quebec. It reflects how O’Toole went from polling about three per cent in Quebec to finish with a commanding 60.5 per cent support in the province.

By targeting Quebec with a specific strategy, O’Toole was able to win the province. But perhaps most importantly he may have discovered the playbook the Conservatives need for a general election in the all-important battleground province.

Quebec was one of the most important factors in the leadership race — and is near-vital in general elections. It was particularly crucial for Peter MacKay, given his strongest support base was in Eastern Canada and his overall strategy required him to pull out an insurmountable lead on the first ballot. With a quarter of all ridings nationally, Quebec was a must-win for MacKay.

Instead, O’Toole decisively defeated Mackay there. He beat MacKay by 11 percentage points on the first ballot, a lead that only grew as Derek Sloan and Leslyn Lewis were eliminated and their votes were redistributed.

This victory was no fluke. O’Toole’s team of organizers in Quebec had a specific strategy for signing up new members and winning over existing Conservatives.

All O’Toole leadership organizers in Quebec who spoke to National Post about the winning campaign point to one major factor that helped propel their candidate to the forefront of the race: the creation of a Quebec-specific platform.

“We were the only national campaign who offered a unique set of promises to the province. We chose issues that were close to Quebecers’ hearts: border security, reinforcing the recognition of the Québécois nation, fiscal promises like removing sales taxes on local video streaming platforms, etc,” said Alupa Clarke, O’Toole’s Quebec campaign director who is largely credited with writing the Quebec platform.

O’Toole’s platform also promised to “significantly increase” the province’s autonomy regarding immigration, to remove any “restrictive conditions” to federal transfers and to take a “non-intervention approach” on issues that are considered the province’s jurisdiction.

“It was an ambitious platform that we publicized aggressively as soon as it was ready. And that’s when we started getting some serious traction with members in the province,” he added.

Though the platform resonated with Conservative voters, Clarke knew from the start the biggest obstacle O’Toole would have to overcome in Quebec was that he was virtually unknown to party members.

Clarke said he launched a “guerrilla” communications campaign of very targeted outreach to voters throughout the province. But because of the COVID-19 pandemic, everything had to be done virtually.

Curated email blasts were sent out daily to members in areas with content from the platform that was tailored specifically to their interests. At the same time, Clarke’s team was organizing small town halls on videoconferencing software Zoom four times a week to introduce O’Toole to current and future members in Quebec.

The campaign also had an automated robocall system that would reach out to hundreds of members, who would then have the option of pressing a button and being connected directly to O’Toole and asking him questions directly.

Housakos also noted that O’Toole rarely refused an invitation to speak on French-language talk shows, which allowed him to show Quebecers that his mastery of the language was improving significantly.

It was an ambitious platform that we publicized aggressively

Housakos, who is recognized for his deep Conservative connections within Quebec and his ability to mobilize voters, said when he meet O’Toole again in April he was thoroughly impressed with his French skills.

“By April, he made a demonstration to me that his French got so significantly better that I said,’You know what? If this guy can make such a significant improvement to his French from December 2019 to April 2020, imagine the improvement he’s going to make from now until the summer.’ That was a big element that tipped me over,” Housakos said.

Over the course of the campaign, O’Toole called 2,000 Conservative members in the province, and Clarke said he spoke virtually to another 7,000 people on the leader’s behalf.

“When I started making calls for Erin O’Toole in February, people would answer and ask, ‘Eric who?’,” Clarke said with a laugh. “But by the beginning of May, people not only recognized Erin’s name right away, but they were quoting parts of his Quebec platform and telling us how much they agreed with it.”

“That’s when I knew that our campaign was taking off,” added Clarke, who became senior advisor to O’Toole when he officially became leader of the Conservative party this week.

And many of the issues that made O’Toole an underdog at the beginning of the campaign are the same ones he’s facing going into a general election.

The Conservatives’ share of the vote in Quebec has dropped relatively steadily since 2006, when Stephen Harper won nearly 25 per cent of the votes in the province.

In 2019, the Conservatives won 10 seats in Quebec, a net loss of two compared to the previous election in 2015. The party received roughly 16 per cent of the vote, a 0.7 per cent drop compared to four years previous.

For O’Toole’s senior advisor, his biggest challenge in the upcoming election is the fact the he is relatively unknown to a majority of Quebecers.

“We have an edge, because we know how to campaign during a pandemic. We know the tools and we’ve gotten used to using them. That’s a major advantage,” Clarke said.

For both Clarke and Carl Vallée, former director of communications to Harper and who was an informal advisor to O’Toole’s Quebec campaign, the final vote showed that Quebec Conservatives are no longer the Red Tories that pundits thought they were.

In fact, the rise of post-sovereignty nationalism in Quebec over recent years has created significant crossover between Conservative and Bloc Québécois voters in the province, Vallée said.

Thus, to win more seats in Quebec in the next election, Vallée and Clarke said the Conservatives must seize the “window of opportunity” to take back the votes lost to the Bloc in the 2019 election.

“A lot of people were making the wrong assumption about the Quebec membership based on old habits of saying, ‘Oh, well because Peter Mackay is more in the Red Tory frame of mind and ideology, he should do better in Quebec’,” Vallée explained. “I do believe that the Bloc Québécois and the federal Conservatives share the same electorate.”

Both Clarke and Housakos also think that O’Toole’s French is much better than ex-leader Andrew Scheer’s, which will give him a fighting chance against the Bloc’s Yves-François Blanchet, a seasoned and charismatic communicator.

Clarke, who promises to run again in the next election after losing his Quebec City-area seat in 2019, thinks O’Toole can also appeal to Quebec’s Blue Grits.

“We want to go get those fiscally conservative liberals who may be disheartened since the resignation of Finance Minister Bill Morneau, who seemed to be the one to reign in spending in the Trudeau government. We want to attract the ‘Paul Martin Liberals’ too,” Clarke said.

But for all the challenges facing O’Toole in Quebec in the upcoming months, his team promises that one major hurdle that caused Scheer to fumble is gone.

During the 2019 campaign, Scheer was plagued by questions on his social conservative views, notably on gay marriage and abortion. Those issues eventually led to his downfall in Quebec, Housakos said.

But they won’t be a problem for O’Toole, he promised.

“Erin O’Toole was given an ‘F’ grade by (pro-life lobby group) Campaign Life Coalition. That’s a badge of honour in Quebec”, Clarke added with a chuckle.