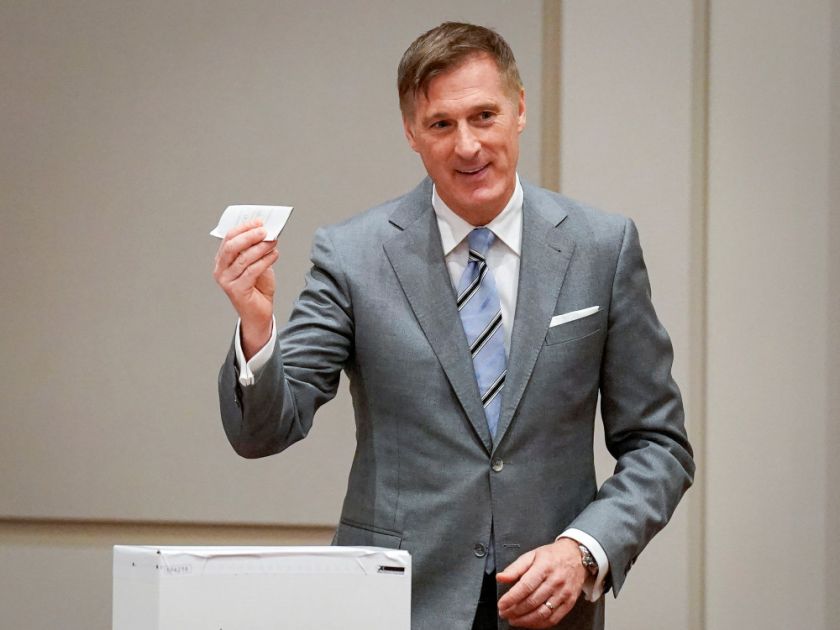 It shouldn't just be about who can beat Justin Trudeau.

The idea of Maxime Bernier winning the 2017 Conservative leadership contest presents a fascinating counterfactual scenario. It is often said that the Conservatives dodged a bullet by not electing the soon-to-be People’s Party leader. But there’s no reason to think he would have tried to take the Tories in that direction, let alone succeeded. And Bernier’s leadership platform was more than radical enough to have turned Canadian politics on its ear, had he stuck to his guns. He proposed oerhauling both equalization and federal health care funding; ending all forms of corporate welfare; eliminating the dairy, poultry and maple syrup cartels; privatizing Canada Post and axing its letter-mail monopoly; abolishing the capital gains tax, and dismantling the CRTC.

It’s heartening, in a way, that such an uncharismatic fellow could have come so close to winning with a policy book that could so easily blow up in his and his party’s face. Heading into the 2020 race, it’s tough to imagine any of the potential candidates being anything like that ambitious. But there are less radical, less radioactive problems that have confounded Liberal and Conservative governments alike and that could use a bashing out during the race.

• The border. The Liberals have derided as intolerant every suggestion the Conservatives have made when it comes to stemming the flow of “irregular” border crossings from New York State into Quebec. Being Liberals, they have also tried to implement some of those suggestions — notably asking Washington to “close the loophole” in the Safe Third Country Agreement, which is to say convincing Donald Trump’s America to take all these people back. Alas, that was no more realistic when the Conservatives proposed it than it was when the Liberals tried to make it happen.

The problem is not getting rapidly better. The summer of 2019 (July-September) saw 5,120 irregular crossers apply for asylum. That’s considerably fewer than the 8,559 who crossed two years earlier, but roughly the same as crossed the previous summer. The backlog of cases as of September 30 was 28,973 — the second-highest of any quarter since January 2017. There has been progress in bringing down processing times, but it has been modest and incremental.

There is no reason for Canadians to freak out about this, but it is perfectly reasonable for them to be annoyed. The border is supposed to be there for a reason.

If Washington isn’t willing to play ball, there aren’t any easy political options. One would be to accept reality, normalize the irregular crossers, and start accepting claims at proper border crossings again. Another would be to devote vastly more resources to processing claims much, much quicker. Either, or both, would at least improve the optics. At the sharp end of the stick, the government could seriously limit whom it’s willing to accept asylum claims in the first place — something that would probably be found unconstitutional.

In any event, a conservative government and leader in waiting should have something concrete and workable to offer on something as basic as border security.

Both parties, unfortunately, have a record of not being able to stop the flow of weapons across the border into the hands of criminals. A serious crackdown would be a natural for a law-and-order party — but it’s no small or easy task.

• “Passport babies.” To suggest it’s a problem that Chinese citizens are coming to Canada for the express purpose of giving birth, thus bestowing Canadian citizenship on their children for use later in life, is to be accused of the worst kind of racism. CBC’s The Fifth Estate has been taking it on the chin recently for daring to report on the phenomenon. We don’t know how many such “tourists” there are (only how many non-residents give birth in Canada), and in any event, many insist, it’s too few to worry about.

The argument boils down to “small problems aren’t worth solving,” which isn’t very compelling. At the very least, it shouldn’t be beyond the Canadian government to find out how prevalent this phenomenon is and propose ways to stop it from happening. Not to say it’s necessary, but a conservative party shouldn’t be terrified of proposing some restrictions on birthright citizenship. The integrity of citizenship is a natural and healthy conservative preoccupation.

• Foreign policy. This is a rather larger issue, but Canada is at a moment of clarity. Iran seems to have shot down a passenger jet with 63 Canadians aboard, and as Matt Gurney wrote in these pages this week, there’s pretty much bugger all we can do about it: “We’ve papered over our lack of power and influence with soothing euphemisms like ‘middle power’ and ‘soft power’ and phrases like ‘punching above our weight.’” Militarily and especially diplomatically, it doesn’t have to be this way.