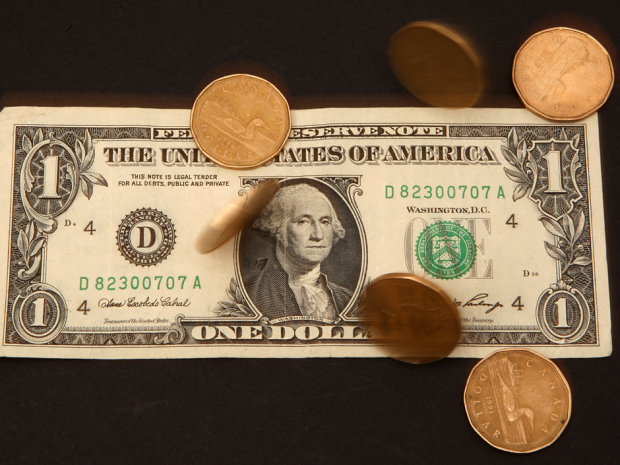 It’s barely a week into the year, and Canada’s biggest bank is already considering cutting the 2015 forecast for the local dollar it just made in December.
The loonie has tumbled 3.4 per cent since the end of November as traders figure the slide in oil and energy prices will only push back the timing of an interest-rate increase by the Bank of Canada. The Group of Seven’s biggest crude exporter has seen the value of energy shipments drop for six straight months, triggering a November trade deficit of $644 million, down from a surplus of $2.04 billion in July.
“We’ve got the generally strong U.S. dollar, we’ve got oil prices teetering around $50 a barrel, we’ve got some concerns about the Canadian economy,” Shaun Osborne, Toronto-Dominion Bank’s chief currency strategist, said by phone. Canada’s dollar has “gone well beyond where we thought we’d be for 2015. We’ve got to go back and look at our forecasts.”
The currency has tumbled beyond the C$1.17 per U.S. dollar low for the year predicted in a Bloomberg survey of strategists, touching C$1.1874 on Jan. 7, the weakest level in almost six years. Osborne said it may drop an additional 3 per cent to C$1.22 as soon as this month, compared with Toronto-Dominion’s official mid-2015 estimate of C$1.19. It was at C$1.1818 as of 2:05 p.m. in Tokyo.
Joining In
Royal Bank of Canada, the nation’s second-biggest lender, says it will probably cut the predictions it made last month for the loonie to take until year’s end to reach C$1.18 and until 2016 to hit C$1.22. National Bank of Canada already released new forecasts calling for the currency to depreciate, while Citigroup Inc., the world’s largest foreign-exchange trader, submitted estimates on Dec. 31 that put the local dollar at levels unseen since early 2009.
“It’s becoming clearer and clearer the energy-price impact on the Canadian dollar is probably for a stronger, quicker drop than we’d been expecting,” Greg Moore, a senior currency strategist at RBC in Toronto, said yesterday by phone. A decline to C$1.20 is now likely in the first quarter, he said.
The loonie has fallen more than 16 per cent versus the U.S. dollar in the past two years as Canada’s economic outlook dimmed and that of its North American neighbour brightened.
Median Estimate
The median estimate of more than 40 strategists in Bloomberg’s Canadian dollar survey has it reaching C$1.17 by mid-year and C$1.16 by Dec. 31. Citigroup, the most bearish forecaster, sees the loonie ending the year at C$1.26 and falling to C$1.30 in 2016.
The Bank of Canada is set to release new economic predictions this month and, since its last set in October, Governor Stephen Poloz has said oil prices may cut growth by about a third of a per centage point in 2015 as they slow inflation and weaken output. The central bank’s October forecasts predicted 2.4 per cent growth.
Since Poloz made his comments in December, oil’s slide has continued, sending Brent crude futures below $50 a barrel this week for the first time since 2009. They were about at $51.22 today, 55 per cent below last year’s high reached in June.
“Not many people saw that coming,” Krishen Rangasamy, a senior economist at National Bank, said by phone from Montreal on Jan. 7. “That’s why they’re revising down their forecasts.”
Rate Outlook
Rangasamy lowered his own year-end loonie estimate by 3 cents this week to C$1.20 per U.S. dollar. He said his original forecast was based on an expectation the Bank of Canada would raise its benchmark rate by the end of this year. Now, he doesn’t think the central bank will act until 2016.
Even companies that are more bullish on the loonie, such as Canadian credit-union operator Desjardins Group, are considering revising down the outlook for the nation’s dollar.
Hendrix Vachon, an economist at Desjardins, said he now expects the currency to stay where it is for the next three months, compared with his previous prediction for a rally to C$1.16 this quarter. He still maintains it will end the year at around C$1.13 as oil bounces back and Canada benefits from growth across the border in the U.S.
“I will probably adjust my forecasts in the next couple weeks,” Vachon said by phone from Montreal on Jan. 7. “In December, we didn’t think oil would continue to fall and fall and fall like this, and fall below the $50 mark. It’s quite a surprise for us.”
Bloomberg.com