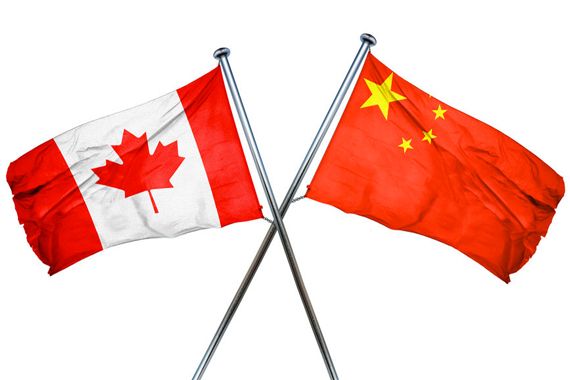 Beijing has adopted a harsh new tone against Canada, summoning the country’s ambassador to China and threatening “serious consequences” if Ottawa does not immediately release Meng Wanzhou, the Huawei chief financial officer.

The warning issued by the Chinese foreign ministry late Saturday marks a shift in response from China.

Initially China faulted both Canada and the U.S. for the arrest of Ms. Meng, the daughter of Huawei founder Ren Zhengfei, a former army engineer who built his company into China’s largest private enterprise. Now it appears China is setting its sights on Canada, specifically.

Ms. Meng’s arrest has caused shockwaves in a country that sees Huawei as a flag-bearer for China’s economic aspirations.

The foreign ministry warning was followed by coordinated commentaries from the People’s Daily and Xinhua News Agency, two of the central organs of China’s state press. Canada will pay “a heavy price” if it does recognize and accept Chinese demands, the People’s Daily wrote, saying “no one should underestimate China’s confidence, will and strength.” It was signed “Zhong Sheng,” a pen name that means “Voice of China.”

“Canada’s misdeeds, which are lawless, unreasonable and callous, have caused serious damage to its relations with China," Xinhua said in a commentary attributed to writers Chen Yong and Wu Liming. Mr. Wu is the director of Xinhua’s international department.

Canada arrested Ms. Meng at the request of the U.S., which has sought her extradition over accusations she committed fraud in misleading an investigation into the sale of U.S. technology to Iran.

Now, however, Beijing is lessening its ire at the U.S. as the country seeks to protect a fragile 90-day detente in a damaging trade war.

It is instead directing its fury at Canada, a course change that prompted a warning from a former ambassador to Beijing that Canadian business leaders in China should be “careful.”

By acting at the behest of the U.S., Canada has demonstrated very bad behaviour, Mr. Le said, and has “seriously violated the legitimate rights and interests of a Chinese citizen.”

If Ms. Meng is not released, he said, there will be “serious consequences, for which the Canadian side will bear full responsibility.”

Ms. Meng has sought bail and her lawyers have argued that the U.S. allegations are built on faulty evidence. Her bail hearing will continue at the British Columbia Supreme Court on Monday.

Mr. McCallum was called in a week after the arrest of Ms. Meng in the Vancouver airport, a delay that suggests there may have been an internal Chinese debate about how to respond, said Willy Lam, a specialist in China politics at the Chinese University of Hong Kong.

”Normally, one would have thought they would have reserved their anger mostly for the Americans,” he said. “But it’s a dilemma for Xi Jinping, because his number one priority is still the resolution of the trade war.” China doesn’t want “the Huawei incident to jeopardize the 90-day negotiations.”

At the same time, he suggested, broad nationalism stoked by Mr. Xi demands a strong response.

“I think they settled on venting their anger at the Canadians,” Mr. Lam said. China “has to do something against Canada, because otherwise Xi Jinping will appear to be soft and weak.” He expects “symbolic punishment, in terms of trade or other issues.”

On Sunday, China also summoned U.S. ambassador Terry Branstad to meet with Mr. Le, who accused Washington of being unreasonable. ”China will take next steps in accordance with further actions from the U.S.,” the Chinese foreign ministry said in a statement whose muted tone stood in contrast to the condemnation of Canada.

In its commentary, Xinhua accused Canada of ignoring international law and flagrantly violating Ms. Meng’s human rights. Ms. Meng suffers from high blood pressure and sleeping problems, and underwent neck surgery in May, the statement said. Xinhua accused Canada of not providing suitable humanitarian arrangements for her health issues, warning that this “has set a dangerous precedent.” Ms. Meng, Xinhua said, has been humiliated and disrespected.

The response has renewed concern that Beijing will target Canadians, particularly after commentary in state media in recent days likened Ms. Meng’s arrest to a kidnapping and hostage-taking.

Guy Saint-Jacques, the former Canadian ambassador to China, was in Beijing when Kevin and Julia Garratt were detained in the midst of Chinese anger over Canada’s arrest of Su Bin, a Chinese man who the U.S. sought to have extradited for spying.

Canadian business leaders currently in China should be “careful,” he said Sunday. “Christmas is coming. Maybe it’s time to think about Christmas vacation.”

Mr. Garratt, who ran a coffee shop in China, was incarcerated for 775 days and eventually found guilty of stealing state secrets and illegally providing them to people overseas. He had taken pictures in public places, including of a bridge frequented by tourists and of Chinese military bridge construction. Ms. Garratt was detained for six months.

In the case of Ms. Meng, ”I hope they don’t start looking at arresting Canadian business people,” Mr. Saint-Jacques said. But, he said, China will see Ms. Meng’s arrest as a political matter and will seek to prod Ottawa to let her go.

Ms. Meng “has a good lawyer and this could drag on for a long time,” he said. “And that means we will suffer the consequences, because the Chinese can be nasty when they want to be nasty — and they will want to exert all kinds of pressure.”

Still, the detention of the Garratts did not succeed in changing the outcome for Mr. Su, who was extradited to the U.S. and sentenced to 46 months in jail.

“While Beijing would never admit it, I believe there were some serious lessons learned that could prevent a re-occurrence of the situation that the Garratts found themselves in,” said James Zimmerman, a lawyer with the international law firm of Perkins Coie LLP. He worked closely with the Garratt family during their detention.

“Travellers with their house in order need not overly worry about unlawful detention by Chinese authorities,” he said.

“That said, getting caught up in China's criminal justice system is a miserable experience that is best to be avoided at all costs.”

Texas: One more threat to the oil sands

The Globe and Mail

Texas: One more threat to the oil sands