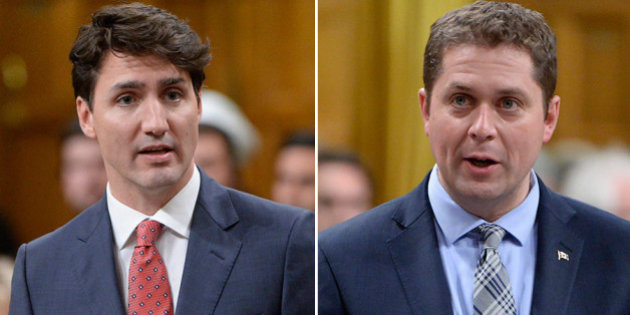 Justin Trudeau’s Liberal government faces a battle royale with provincial premiers that could leave Andrew Scheer the last one standing.

Except that Mr. Scheer isn’t able to explain why he wants to be prime minister. The Conservative Leader needs to answer that question, if he is to capitalize on Mr. Trudeau’s travails.

After a decade in which Stephen Harper pretty much left provincial and Indigenous leaders to their own devices, Mr. Trudeau came to power on a promise of what some call “reconciliatory federalism” – a positive approach to solving problems through intergovernmental co-operation at all levels.

Unfortunately, progress in Indigenous reconciliation is noticeably lacking. And relations with the provinces are falling apart. For one, the government in British Columbia is angry over Ottawa’s nationalization of the Trans Mountain pipeline.

For another, Saskatchewan and Ontario reject the carbon tax that Ottawa negotiated with the provinces. The Trudeau government has vowed to impose its own tax on the holdouts, although at the same time it is watering down the provisions of the tax.

For a third, Doug Ford’s new Progressive Conservative government in Ontario is demanding federal compensation for refugee claimants who are moving to the province after crossing the Canada-U.S. border at unofficial entry points.

“Federal-provincial discord is there and it’s real,” says Jim Farney, a political scientist at the University of Regina. He is surprised at the extent to which the Liberals in Ottawa are misreading the level of discontent among the premiers. “I don’t think they quite get the toes that they’re stepping on.”

All of this leaves Mr. Trudeau politically vulnerable, in the view of Kelly Saunders, a political scientist at Manitoba’s Brandon University. “Canadians are going to say, ‘You promised big but you really haven’t managed to deliver, and everybody’s fighting with everybody else. So what has sunny ways really gotten us in terms of advancing the agenda?’ ”

Beyond that, she observes, if the Coalition Avenir Québec wins this year in Quebec and Jason Kenney’s United Conservative Party wins next year in Alberta, there won’t be a provincial Liberal government west of Fredericton. Mr. Scheer would “be a fool if he didn’t reap the benefits of that," Ms. Saunders says.

But the former speaker of the House of Commons remains an enigma, a ubiquitous smile masking sometimes harsh rhetoric. The Liberals try to demonize him as Canada’s equivalent of populist U.S. President Donald Trump (which seems a bit much) or Stephen Harper 2.0 (although, is that such a bad thing?). Does Mr. Scheer’s inability or unwillingness to define himself politically hurt him with voters? The party has remained essentially tied with the Liberals in the polls for months.

Cameron Anderson, a political scientist at the University of Western Ontario in London, Ont., believes the Conservatives are being wise in keeping a low profile. “It’s probably in the Conservatives' interests to not do a whole lot in articulating an alternative view at this stage,” he maintains. The Liberals may well defeat themselves over their war with the provinces.

At some point, Mr. Anderson believes Mr. Scheer might lay out "a more decentralist- or provincialist-minded vision,” which could return peace to a war-weary federation.

One file on which the Conservatives must be very careful is refugee claimants. The Official Opposition can and should hold the government to account: Tens of thousands of asylum seekers have crossed the border between official ports of entry, who then wait up to two years for a hearing, undermining confidence in the immigration system.

But if people of goodwill ever conclude that Mr. Scheer is leading a party that stokes intolerance, he will contaminate the Conservative brand for a generation.

The leader has been quiet on this issue, as on so many others. But sooner rather than later, instead of simply accusing the Liberals of losing control over the situation, he will want to lay out, perhaps in a major speech, his vision of immigration, multiculturalism and border control under a Conservative government.

Until then, we wait to see how Mr. Trudeau will handle the conflicts with the provinces under way or on the horizon, and when and whether Mr. Scheer will tell us exactly who he is.