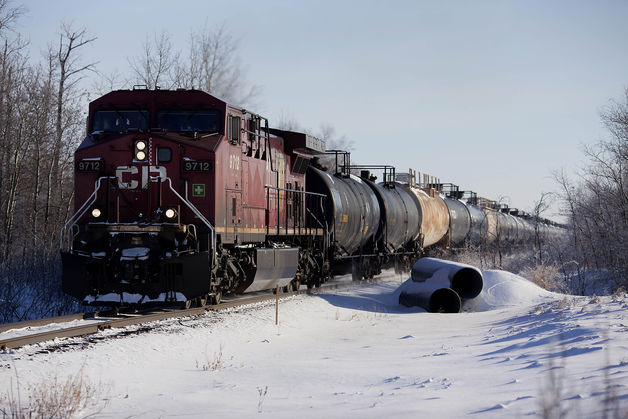 Producers including Suncor Energy Inc. and Canadian Natural Resources Ltd. (CNQ), which each fell the most in at least three years yesterday, operate in one of the most expensive places on earth to produce oil. If crude prices continue sinking following OPEC’s decision yesterday not to cut global oil output, Canada’s producers big and small will have to tighten their belts to prepare for declining profits.

“This is a pretty big shock,” said Justin Bouchard, an analyst at Desjardins Securities Inc. in Calgary. “There’s no question there’s going to be a slowdown. Even the big guys will have to look at their capital spending plans.”

Western Canada Select, the Canadian benchmark, has lost more than a third of its value since June, in step with declines for West Texas Intermediate and the international gauge Brent. WCS traded yesterday at $55.94 a barrel, the lowest in the world, and fell further today to $51.55.

Investors reacted yesterday by sending the 69-company Standard & Poor’s/TSX Composite Index Energy Sector Index down 5.1 percent, the most since August 2011. WTI sank as much as 8.1 percent and Brent fell as much as 8.4 percent after the announcement from the Organization of Petroleum Exporting Countries.

Suncor (SU) declined as much 6.9 percent yesterday, the most intraday since September 2011, while Canadian Natural dropped as much as 9.2 percent, the most since August 2011. Among other producers, Athabasca Oil Corp. sank 10 percent at the close yesterday, MEG Energy Corp. plunged 14 percent and Crescent Point Energy Corp. fell 9.7 percent. All five stocks fell further today.

Canadian Natural, which has a budget of C$8.6 billion for 2015, may trim spending if oil prices approach $70 a barrel and stay there, President Steve Laut said in an interview earlier this month.

Producers have struggled to get growing production to coastal markets, with projects such as TransCanada Corp.’s Keystone XL and Enbridge Inc.’s Northern Gateway stalled. Labor shortages in Alberta and the high costs to move heavy equipment to remote oil-sands sites add to the challenges.

There are factors working in the Canadian producers’ favor.

To offset low prices, as well as the high cost of mining and steaming bitumen from northern Alberta, Suncor, Cenovus Energy Inc. and some competitors own refineries and use trains to move their products to coastal markets, where they get better prices.

The loonie, as the Canadian dollar is known, was worth about 88 U.S. cents yesterday, compared with about $1.01 in December 2012 when the discount on Canadian heavy crude to the U.S. benchmark was at its widest of $42.50 a barrel. A lower loonie relative to the greenback reduces costs for Canadian producers and helps boost exports priced in U.S. dollars.

The spread between Canadian heavy crude and WTI has also narrowed to $17.75.

Suncor lowered its cash operating costs in the third quarter to C$31 a barrel and realized prices of C$89 a barrel, Chief Executive Officer Steve Williams said on Oct. 30 during a conference call with analysts. The Calgary-based company operates four refineries in North America, which allows it to take advantage of low oil prices.

“Price volatility is a fact of life in our industry, which is why we maintain a very strong balance sheet that allows us to fund our capital programs through the price cycle,” Williams said yesterday in an e-mailed response to questions. “Our long-term expectation is for an average oil price in the $90 to $100 range, but we fully expect that from time to time, the global supply-demand situation will drive the price well outside that envelope.”

Stocks tied to oil-sands growth are falling less than Canadian producers focused on delivering output growth from shale, as well as those carrying high levels of debt, said Jennifer Stevenson, who helps oversee C$5.5 billion at Dynamic Funds in Calgary. That’s because investors consider oil-sands developers based on long-term prices for decades-long projects, she said.

Still, all producers will see their cash flow crimped.

“It’s not a holiday today for anyone in the oil business,” Stevenson said.

Oil Enters New Era as OPEC Faces Off Against Shale; Who Blinks as Price Slides Toward $70?