United Nations Calls for an End to Industrialized Farming 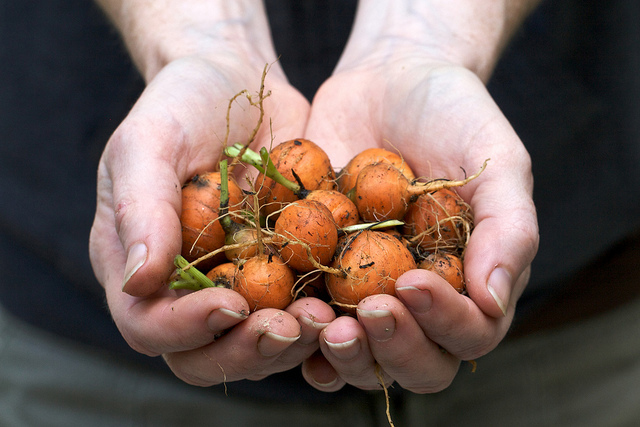 In 2013, the United Nations announced that the world's agricultural needs can be met with localized organic farms. That's right, we do not need giant monocultures that pour, spray and coat our produce with massive amounts of poisons, only to create mutant pests and weeds while decimating pollinators and harming human health. Don't believe the hype: We do not need genetically modified foods "to feed the world."

From my experience, many of these - how shall we call them - "worker bees" (i.e the GMO salesmen) who work for these companies and spread this propaganda, actually believe conventional tactics are necessary to ensure food security. They've drunk the Kool-Aid and cannot envision another possibility. The changes threaten their very existence.

Organic agriculture, which has gone from a fringe movement to a multibillion industry, can produce high yields and withstand disaster and duress much better than chemical-reliant crops, according to reports coming out of the International Federation of Organic Agriculture Movement (IFOAM), which held its 18th annual world congress in Istanbul this past October.

And a 30-year study from the Rodale Institute, showed that organic farm fields yielded 33 percent more in drought years compared with chemically managed ones.

In an article titled "Yes Organic Food Can Feed the world," Anna Lappe, author and educator, known for her work as an expert on food systems, writes that "organic agriculture is taking off around the world, especially where it's needed most."

She reports that 80 percent of all organic producers are based in developing countries, with India, Uganda, Mexico and Tanzania leading the charge. To date, 162 nations are now home to certified organic farms, and in 2012, the 37.5 million hectares of farmland produced a harvest worth $63.8 billion.

Food security, poverty, gender inequality and climate change can all be addressed if we adopt a significant paradigm shift, according to the UN's Trade and Environment Review (TER), a 320-page report written by 63 authors from organizations around the world. They provide evidence with numerous coherent case studies and surveys.

The solution to all these interrelated problems is establishing a conglomerate of small, bio-diverse, ecological farms around the world and a localized food system that promotes consumption of local/regional produce.

"I try to raise awareness about the need to shift away from globalizing to localizing," Helena Norberg-Hodge recently told actor and activist Russell Brand on his internet show "The Trews" (truth+news= trews). Norberg-Hodge is an analyst on the impact of the global economy and on cultures in agriculture worldwide. "Localizing is a systemic alternative that has incredible power."

In fact, small farms are known to be two to 10 times as productive as large industrial farms and much more profitable, not just in the developing world, but also in the developed world, reports the Institute of Science in Society (ISIS).

"Smaller diversified farms employee more people and use less land and water and produce more foods," says Norberg-Hodge in her interview with Brand. She explains that localization also shortens the distance between consumers and producers, which helps the environment and also ensures that you do not eat produce that is pretty much dead traveling such insane distances.

"Industrial agriculture and our globalized food system is a major contributor to greenhouse gas emissions, up to 50 percent if proper account is taken of emissions from land use change and deforestation, most of which are due to agriculture, and for food-related transport, processing, storage and consumption," writes ISIS.

Listen to the full episode "TTIP - How We're Lied To About Food: Russell Brand."

TTIP And A Conspiracy of Silence

Unfortunately, it is difficult to implement changes on a local or national level because there are global trade agreements that prevent us from doing so. These agreements serve giant corporations and corporate greed only.

Enter the Transatlantic Trade and Investment Partnership (TTIP), which is a controversial series of trade negotiations currently being negotiated in secret between the European Commission and the US government in the name of so-called "free trade." TTIP, which Brand sarcastically refers to as the "best thing to happen to planet Earth since Jesus," has only corporations' best interests in mind. And if it passes, corporations will literally be able to sue governments if and when they attempt to protect their citizens or our environment.

Not only does TTIP threaten our food supply and environment, but public services, workers' rights, and online privacy as well. A story in The Independent outlines six reasons why TTIP should scare you. Or check out this TTIP infographic from Action for Solidarity Environment Equality and Diversity.

Unfortunately, we have no direct say on whether TTIP goes through or not. All we can do is get educated, tell as many people as possible and demand transparency.