U.S. pleads with Russia for ‘mercy’, gives up on Aleppo and admits Syrians will win 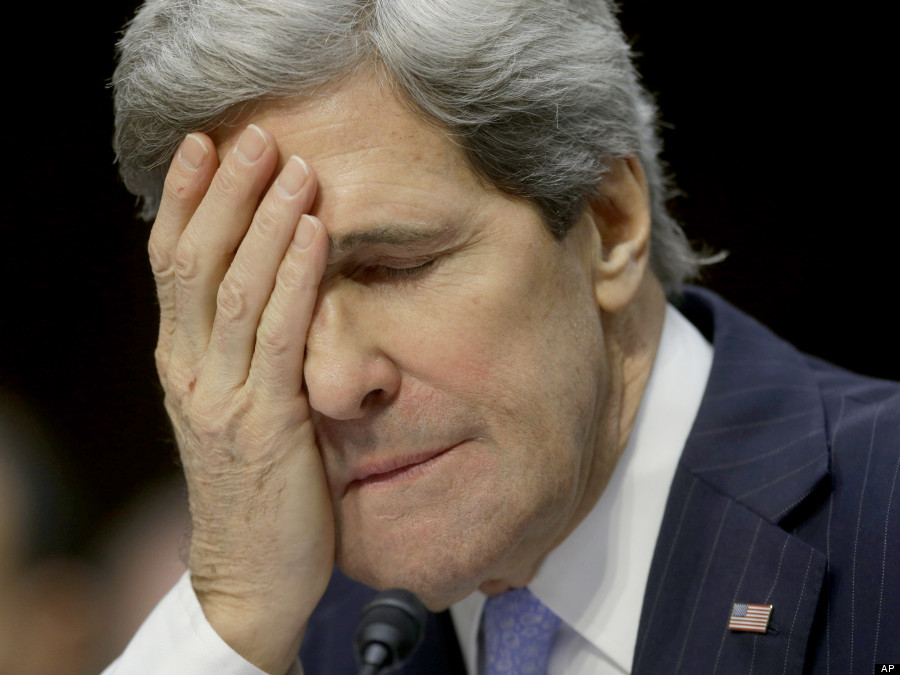 The events of the last few week can be summed up quickly.

Following the US climbdown in the first week of October after the Russian warning of Russia’s readiness to shoot down US aircraft carrying out bombing strikes against Syrian bases, a final attempt was made to scare and embarrass the Russians into getting the Syrians to call the Aleppo offensive off.

A meeting of the US National Security Council took place on Friday, with some US officials telling the media anonymously that military options would again be discussed and presented to Obama for his consideration.

This was a completely empty claim since Obama had publicly rejected these same military options the previous week.  The same US officials were therefore obliged to admit that it was “extremely unlikely” that Obama would approve these options, and he would probably “not make a decision”.

Meanwhile Boris Johnson, Britain’s hapless Foreign Secretary, appeared to float an idea for a “no bombing zone”, though typically he never did so clearly or openly and most of the details had to be provided in off the record conversations to the British media.

The idea behind this “no bombing zone” was that the US and the Western powers would unilaterally announce a prohibition on bombing by the Syrians and the Russians in any part of Syria.  In the event that the Syrians or the Russians disregarded this announcement and continued bombing, the US and the Western powers would retaliate by launching strikes against Syrian bases and military facilities where no Russians were believed to be present.

It is not clear who was the originator of this plan but its half-baked nature suggests it was probably Boris Johnson himself.

In a situation where the air defences in question are not merely Syrian but Russian – and therefore far more capable of shooting down US aircraft – the whole idea of enforcing a “no bombing zone” without an aerial bombardment to “degrade” these defences is inconceivable.  Only a complete civilian with no understanding of how the US military conducts operations would conceive of it, which is why its author is very likely to be Boris Johnson himself.

The “no bombing zone” would in fact depend for its enforcement on launching long range cruise missile strikes on Syrian bases from US warships, which for geographical and political reasons would have to be based in the eastern Mediterranean.

Some of the Russian air defence systems in Syria are probably capable of shooting down these cruise missiles.  The S-300MV Antey-2500 recently deployed to Syria was designed for this very purpose.

The Russians say it is in Syria to protect Russia’s naval facility in Tartus.  That suggests its units have been stationed along the Syrian coast, in other words precisely in the area where they would most effectively intercept US cruise missiles launched from US warships from the eastern Mediterranean.

That already puts the viability of enforcing the “no bombing zone” with cruise missiles from US warships in the eastern Mediterranean in question.

The key concern of the US would however be that the Russians have also warned that in case of US missile strikes on Syria killing Russian personnel they would retaliate with missile strikes of their own against facilities in Syria they know to be staffed by US personnel.

There are persistent rumours the Russians have already done just that.  This was supposedly done in retaliation for the US air strike on the Syrian military near Deir Ezzor.  That is rumoured to have killed three Russian advisers stationed with the Syrian troops there.  In retaliation the Russians are supposed to have launched a cruise missile strike on a Jihadi headquarters staffed by Western military personnel – including some from the US – all or some of whom were killed.

Even if this strike never happened – and it has never been confirmed that it did – someone is spreading rumours about it.  Quite conceivably it is the Russians as their way of making clear that it is something they are prepared to do.

It is inconceivable that the US political and military leadership would put the lives of its personnel in Syria at risk in this way, especially in a situation which could easily escalate into a full-blown military confrontation with the Russians.

One way or the other the “no bombing zone” faces the same insuperable problems that a fully fledged “no fly zone” does.  An editorial in The London Times has now admitted as much.

Quite simply, what makes it impractical is that it risks a head on confrontation with the Russian military in Syria.  That is something that neither the West’s political nor its military leadership is prepared to risk.

All this became entirely obvious at a meeting of Western foreign ministers in London on Sunday convened by Boris Johnson directly following Kerry’s meeting with Lavrov on Saturday in Lausanne.

It is clear that Kerry found Lavrov in Lausanne completely immoveable, with Lavrov sticking to the well-known Russian position that there can be no more unilateral ceasefires by the Syrian army, and that a precondition for a ceasefire is the separation of Syrian opposition fighters from Jabhat Al-Nusra – as the US has repeatedly promised and as has repeatedly failed to happen.

In the face of this, and with military options ruled out, the Western foreign ministers in London were left with nothing other than to accept the inevitable, which is that the Syrian government is going to recapture eastern Aleppo.

This became clear from the subsequent news conference, which significantly only Kerry and Johnson attended.

Both Kerry and Johnson admitted that there is no support in Europe for military action in Syria and that this option has been ruled out.  Here is what Kerry had to say about it

So we are pursuing diplomacy because those are the tools that we have, and we’re trying to find a way forward under those circumstances. Easy to say, where’s the action? But what is the action? I have a lot of people who have a lot of trouble defining that when you really get down to trying to do it.”

And here is what Boris Johnson had to say about it

“And to the gentleman there, look, no option is, in principle, off the table. But being no doubt that these so-called military options are extremely difficult and there is, to put it mildly, a lack of political appetite in most European capitals and certainly in the West for that kind of solution at present. So we’ve got to work with the tools we have. The tools we have are diplomatic….”

As to what has forced the West to take the “military option” in Syria off the table, Kerry spelled it out.  It is what The Duran has reported (see here and here), and what the Western media has ignored

“…..when a great power is involved in a fight like this, as Russia has chosen to be by going there and then putting its missiles in place in order to threaten people against military action, it raises the stakes of confrontation….”

With no military option available, and with all forms of pressure on the Russians having failed, there is nothing more the West can do.

That this is so was most clearly admitted by Boris Johnson.  All he could come up with to save the Jihadi fighters in Aleppo was plead with the Russians for mercy

“And it is up to them (NB: the Russians – AM) to seize this moment to recognise the opportunity and, in my view, to show greatness and to show leadership…..it’s really up to them now to listen and to show mercy – show mercy to those people in that city, get a ceasefire going, get the negotiations going in Geneva, and let’s bring this slaughter to an end.”

When a Western foreign minister – even one as preposterous as Boris Johnson – is reduced to pleading with the Russians for mercy, then it is obvious that the game is over and the ‘Great Battle of Aleppo’ has been lost.

Kerry in fact all but admitted as much.  His comments make it clear the US now accepts the Syrian government is going to recapture eastern Aleppo, and that the Jihadi fighters there are doomed.  All he could say was that it would not be the end of the war.

“Now, some people ask what happens to Aleppo if it were to fall. Well, the Russians should understand, and Assad needs to understand, that that does not end the war. This war cannot end without a political solution. So even if Aleppo were to fall, even if they have utterly destroyed it, which they are doing, that will not change the fundamental equation in this war because other countries will continue to support opposition, and they will continue to create more terrorists, and Syria will be the victim in the end as well as the region.”

That continuing the war after the Syrian government recaptures eastern Aleppo is now the US objective was previously confirmed by the same US officials (quite possibly Kerry himself) who spoke anonymously to the media last week.  Here is how Reuters reports it in a despatch dated Friday 14th October 2016

“The ultimate aim of any new action could be to bolster the battered moderate rebels so they can weather what is now widely seen as the inevitable fall of rebel-held eastern Aleppo to the forces of Russian- and Iranian-backed Syrian President Bashar al-Assad.”

The US and its allies do have the means to prolong the war in Syria at least for a time even after the Syrian government regains control of eastern Aleppo.  As Mark Sleboda and I have previously said, it is precisely in order to create a safe zone for the Jihadis in north east Syria – and therefore to prolong the war – that the Turkish military with US support invaded north east Syria in August.

Whatever Jihadi entity is eventually created in the Turkish controlled safe zone in north east Syria, it cannot however convincingly claim to be the government of Syria.  That will always be the government in control of Syria’s great cities, first and foremost Aleppo and Damascus, and the densely populated region of western Syria in which they are located and where the great majority of Syria’s people live.

With the recapture of eastern Aleppo the future of this government will have been secured.  That means that for the foreseeable future the regime change project in Syria is dead.

U.S. pleads with Russia for ‘mercy’, gives up on Aleppo and admits Syrians will win