Russia Takes Over The Mid-East: Moscow Gets Green Light For Strikes In Iraq, Sets Up Alliance With Jordan 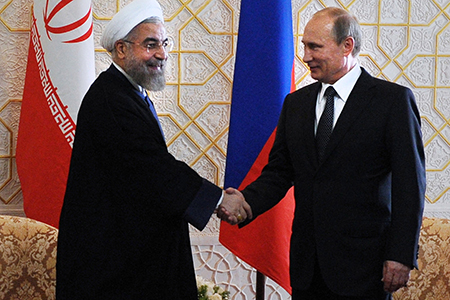 Once it became clear that Moscow and Tehran had jointly planned the incursion in Syria with Russia promising full air support and Iran pledging ground troops from Hezbollah, its various Shiite militias, and the IRGC, we immediately suggested that Iraq was next on the agenda after the Assad regime is restored.

For those unfamiliar with the situation on the ground, we encourage you to read “Who Really Controls Iraq? Inside Iran's Powerful Proxy Armies,” in which we outline the extent to which Tehran effectively controls both the Iraqi military and the politicians in Baghdad.

The US allows this because i) there’s really not much Washington can do about it, and ii) even if there was, it would mean first trying to root out Iranian influence on the political process and second attempting to separate the Shiite militias from the Iraqi regulars, which would only serve to weaken the country’s ability to resist Sunni extremists like ISIS. The other important thing to understand about Iran’s proxy armies in Iraq is that they are the very same militias fighting alongside the Russians in Syria (we mean “very same” in the most literal sense possible as they were called over the border by Quds commander Qassem Soleimani himself). This means they are Washington’s allies in Iraq but as soon as they cross the border into Syria, they become the targets of US-supported and supplied rebels battling at Aleppo. Obviously, that makes absolutely no sense and is emblematic of just how schizophrenic Washington’s Mid-East strategy has become. It’s also worth noting that these are the same Shiite militias who, with Tehran’s blessing, attacked US troops in Iraq after George Bush destroyed the US-Iran post-9/11 alliance by putting the country in his infamous “Axis Of Evil" (see here for more).

Here's a picture that should give you an idea about why Iran's proxy armies have proven particularly effective at bullying the ISIS bully, so to speak:

Meanwhile, flying missions over Iraq is the logical next step for The Kremlin in Russia’s bid to supplant the US as Mid-East superpower puppet master. One would be hard pressed to come up with a more humiliating scenario for Washington than for the US to be effectively kicked out of the country it “liberated” over a decade ago by Vladimir Putin on the excuse that try as they may (or may “not”, depending on how prone you are to conspiracy theories), the Americans are apparently not very good at fighting terror.

Just like in Syria, Russian airstrikes would be supported by Iran-backed fighters on the ground, and thanks to the IRGC’s grip over Iraqi politics, Moscow would find Baghdad very receptive to Russia’s presence in the country.

The US knows all of this of course and in an effort to get out ahead of the situation, Washington sent Gen. Joseph Dunford (chairman of the Joint Chiefs of Staff) to Iraq this week to issue what can only be described as a petulant, childish ultimatum to PM Haider al-Abadi. “It’s either us, or the Russians,” Abadi was told, although not specifically in those terms. Here’s what Dunford actually said:

Although the PM purportedly pledged not to request Russian assistance, anyone who’s followed the story knows Dunford’s trip was far too little, far too late.

ISIS has been running amok in Iraq for more than a year and the US appears powerless to stop them. As we noted, there are several theories as to why Washington is so intent on keeping Moscow out. The common sense theory that requires no conspiratorial ruminations says that the US is desperate to avoid ceding Baghdad to Russia and the Pentagon knows that with Iran already effectively in control of the army and the government, Russia would find a very receptive military and political environment. For those inclined to think that in addition to any initial support (i.e. funding and training prior to the official formation of ISIS), the US is still supporting Islamic State, well then the worry for Washington is that Russia simply wipes them out.

Whatever the case, Iraq has apparently had just about enough of it and indeed, one of the reasons Dunford made the trip was that last week, Abadi said he would “welcome Russian airstrikes.” Throw in the brand new intelligence sharing center in Baghdad jointly staffed by Russia, Iran, and Syria and it’s pretty clear that despite what Abadi might have told Dunford to reassure the Pentagon, the "red" coats (if you will) are indeed coming.

The authorization for Russia to target Daesh inside Iraq comes amid security coordination between Iraq, Russia, Iran and Syria.

Hakem al-Zamli, chief of the Iraqi parliament’s security and defense committee, told Anadolu Agency on Friday that the measure contributed to weakening Daesh by cutting off its supply routes.


That will be just the beginning. We assume the whole “convoys from Syria” language is an effort on Baghdad’s part to make it sound like this isn’t a green light for Russia to take over the skies above Iraq but one certainly wonders how Washington intends to respond given that Abadi just told Dunford Iraq wouldn’t allow this to happen.

And that’s not all.

Russia has now created yet another intelligence sharing cell in the Mid-East, this time in Jordan as Moscow and Amman are set to work together to rout ISIS. Here’s RT:

Russia and Jordan agreed to create a coordination center in Amman, which will be used by the two countries to share information on the counter-terrorism operations, Russian Foreign Minister Sergey Lavrov said.

Russia is already in touch with Iran, Iraq and Syria through a Baghdad-based center used for the same purpose.

Lavrov said Jordan would play a positive part in finding a political solution to the Syrian conflict through negotiations between Damascus and opposition forces, an outcome that Russia itself is pursuing.

“Under an agreement between His Majesty King Abdullah II and Russia’s President Vladimir Putin, the militaries of the two countries have agreed to coordinate their actions, including military aircraft missions over the Syrian territory,”Lavrov said. His Jordanian counterpart Nasser Judeh said the center would serve as an efficient communication tool for the militaries of the two nations.


As you might recall, Jordan's King Abdullah wasn't exactly pleased after ISIS released a video showing a Jordanian pilot being burned alive. Here's the visual message he sent to the group after the video surfaced:

Once again, it's important to understand that this is all made possible by the fact that the US, Saudi Arabia, Qatar, and Turkey decided to use extremist groups as their weapon of choice to destabilize Assad. That gives Moscow all the political and PR cover it needs to not only make a pure power play in Syria, but to establish closer diplomatic and political ties in Iraq and now Jordan. Thanks to the fact that the Western media has held up ISIS as the devil incarnate, The Kremlin has a foolproof cover story for what is quite clearly becoming a sweeping attempt to establish Russian influence across the region.

Finally, don't forget that with each move Russia makes towards replacing the US as Mid-East superpower puppet master, Iran gets that much closer to supplanting Saudi Arabia as regional power broker. The Kremlin's alliance with Jordan plays right into that dynamic as the Moscow-Tehran nexus is literally encircling Riyadh, Doha, and the UAE...