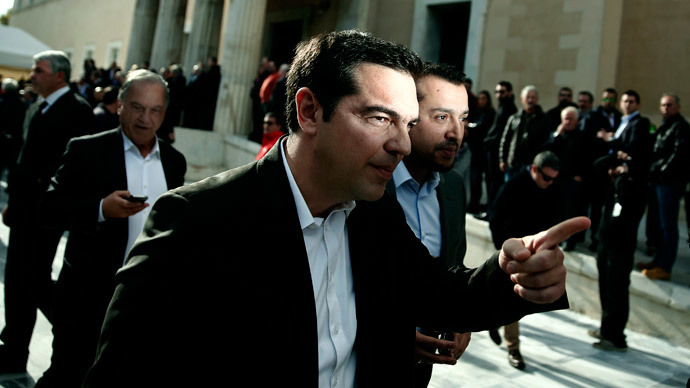 The new Greek government has spoken out against the EU partners over the statement that lays the blame for Saturday’s fatal attack on the Ukrainian city of Mariupol on Russia. Hungary, Slovakia, and Austria voiced similar objections earlier.
The government, headed by Prime Minister Alexis Tripras, said in a press release on Tuesday that “the aforementioned statement was released without the prescribed procedure to obtain consent by the member states, and particularly without ensuring the consent of Greece."
“In this context, it is underlined that Greece does not consent to this statement,” Tsipras added.
He voiced his “discontent” in a phone call to EU foreign relations chief Federica Mogherini.

The EU statement was published on Tuesday morning, saying that all 28 EU leaders had agreed that Russia bears “responsibility” for a rocket attack on the city of Mariupol that left 30 people dead on Saturday.
Brussels objected that the Greek government had been informed about the statement on Russia and Ukraine, but no one had contradicted it until Tuesday.
European Council President Donald Tusk initiated the EU statement, and claimed he had called Tsipras and the “sherpas” - top officials taking care of EU issues in each leader's office.
One EU diplomat reportedly said that Greece had attempted to remove the line blaming Russia for the Mariupol killing. Also, Austria, Hungary, and Slovakia tried, and failed, to “water down” the communiqué, the EU Observer website stated.
It’s the first time that such a situation - a retroactive abjuration of an EU line - has happened, EU Council official stressed.
Foreign affairs analyst Serja Trifkovich told RT that other countries might follow suit and oppose Brussels’ policies on the Ukrainian crisis.
“It’s very difficult in the EU to break the ranks. Now that Greece has made a move, I confidently expect that the Hungarians in particular, but perhaps also Slovakia and Cyprus, will [find] the courage to say no to the dictate from Brussels.”
The EU statement on Russia and Ukraine also urged for more sanctions, for considering “any appropriate action” against Moscow.

One of the measures being mulled is to block Russia from the global interbank SWIFT payment system.
Economist Max Fraad Wolff told RT that this would be a drastic measure.
“Let’s be fair and honest here: if you’re cut off from SWIFT, your ability to have any kind of normal business flow with the global commerce community is hampered.”
However, what he envisages is that “cooler heads will prevail” and that “we won’t see Russia cut off from the SWIFT system,” as it is “in very few parties’ long-term interests.”