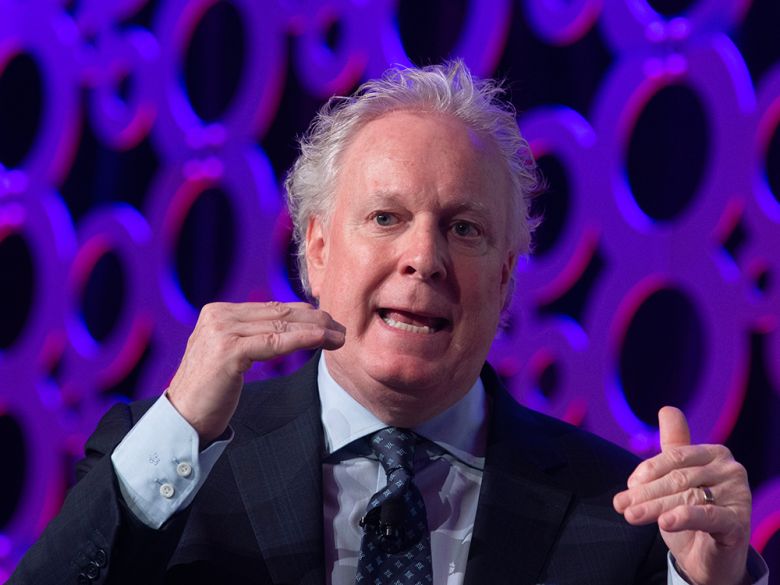 I always imagined it would happen in a dank and smokey bar. A woman in trenchcoat buttoned up to her ears would sit down, slide a manilla envelope to me across the rye-soaked table, and disappear as soon as she arrived. Pulling out the page inside, I’d take a deep breath and say:

“Jean Charest? I haven’t heard that name in years.”

I did not expect that my reintroduction to the former premier of Quebec would be under the guise of Conservative party succession planning. But here we are.

While the rest of the country may think of Charest, if they think of him at all, as federalist crusader and longtime grand poobah of Quebec, for many in Quebec, he’s remembered more for the swirling corruption allegations and his anti-democratic hue.

For many in Quebec, he’s remembered more for the swirling corruption allegations and his anti-democratic hue

Why Charest would invite the scrutiny of his record now, some eight years after he lost his own seat in a bruising provincial election, escapes me.

For much of his near-decade as premier, Charest acted as a fastidious technocrat, working to bring the province’s books to balance while trying to get the economy turning over. And to that end, he deserves a lot of credit — Quebec weathered the 2008 recession better than Ontario, even as Charest raised taxes to bring the deficit to heel.

A somewhat-unpopular fiscal hawk premier is still a pretty good get for a leadership race. It’s what happened in Charest’s last term that makes his apparent interest in a run so befuddling.

After the global recession eased up and growth returned to Quebec, Charest embarked on getting spending under control once again, mostly by taking aim at the province’s generous social services, particularly its heavily subsidized post-secondary education.

Tuition rates had been frozen since the late 1990s, and changes were sure to spark opposition from Quebec’s well-organized student organizations — maybe that was by design. His plan was not only to unfreeze the rates, but to nearly double them. Protests began immediately, and a general student strike followed, closing several universities. Nightly protests sparked intense debate in the province over Charest’s gambit.

Then, in May 2012, the Charest government introduced Bill 78. On top of suspending the rest of the school year for many institutions, it imposed draconian rules on public protest. Anyone looking to hold a gathering of 50 people or more would need to provide their route and means of transportation to police eight hours before the planned start time, or else the rally would be declared illegal immediately. (The government initially wanted the law to apply to groups of 10.)

I got to experience Charest’s virtual protest-ban first-hand, as a cub reporter covering the demonstrations. Hundreds of thousands of protesters had filled the streets during the day, but when protesters held a smaller rally one warm night in May, police declared it illegal and began to round everyone up — myself included. My press credentials apparently counting for nothing, I was handcuffed and told I’d be heading up the river. An editor’s irate call to police HQ eventually led to my release. Hundreds of others were put on buses and taken to prisons to be processed.

The bill was condemned as unconstitutional by the Quebec human rights commission, the Quebec Bar Association, and a host of others. Because it was very unconstitutional. It green-lit the mass-arrests of Canadians who were exercising their right to peaceful assembly. The legislation expired via a sunset clause in 2013, amid court challenges. Even those wary of the rabble-rousing student protesters were put off by Charest’s Vladimir Putin-esque turn.

If that’s not enough, Charest then faced a series of wild revelations concerning Montreal’s construction industry.

Municipal parties in and around Montreal had been running an intricate cash-for-contracts scheme, with buy-in from the Mafia, to rig municipal infrastructure work in order to line their party coffers. Under pressure, Charest set up the Charbonneau Commission to study the rank corruption. Mayors fell, industry tycoons were arrested, and the whole dirty affair was dragged into the light.

Between his ham-fisted response to the student strike and the damaging revelations of widespread corruption, Charest’s government was deeply unpopular. It finally keeled over in 2012, replaced by a Parti Québécois minority, and Charest lost his own seat.

Investigations into corruption continued without him in power. A photo emerged of Charest at a fundraiser with Tony Accurso, a central industry player in the kickback conspiracy, who would later be sentenced to four years in prison. It came out that Charest’s municipal affairs minister, Nathalie Normandeau, accepted nine tickets in a luxury box to see Celine Dion at the Bell Centre from another central player in the whole scheme — who also got a big contract with her help.

The provincial anti-corruption agency even had Charest, and his top fundraiser Marc Bibeau, under surveillance right up until 2016. The agency had investigated possible shady efforts to raise party funds from SNC-Lavalin.

Just this week it was revealed that police wanted to bug Bibeau’s office, looking for more evidence that companies were funnelling illegal contributions to the party. The investigation was hobbled not by a lack of leads, the anti-corruption watchdog alleges, but because they were frustrated by the Liberal government of the day.

Quebec has done a fantastic job of rooting out corruption. The political donation regime has taken big money out of the equation. Nobody is keen to return to the days of wads of cash stuffed in the campaign office safe.

Charest left office with some of his legacy intact. Should he actually run for the leadership of the Conservative party, whose red Tory predecessor he ran briefly to moderate success, that history is going to be dredged up to great effect.

If Charest is eager to defend that record, he should have at it. But it’s going to get messy.

Justin Ling is a freelance journalist.