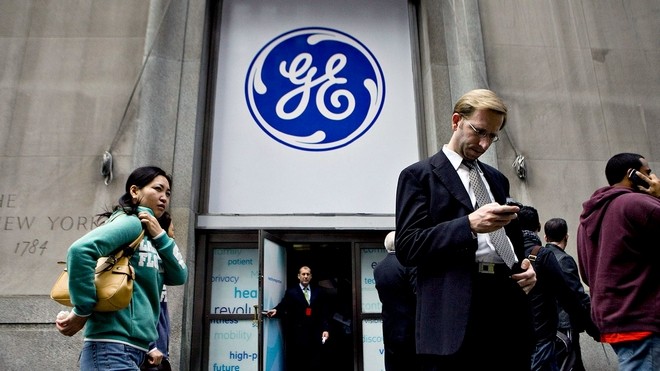 GE has the largest pension shortfall in the S&P 500. It’s a $31 Billion Balance Sheet Hole That Keeps Growing.

At $31 billion, GE’s pension shortfall is the biggest among S&P 500 companies and 50 percent greater than any other corporation in the U.S. It’s a deficit that has swelled in recent years as Immelt spent more than $45 billion on share buybacks to win over Wall Street and pacify activists like Nelson Peltz.

In the last two years, GE spent little more than $2 billion on total pension contributions, which hasn’t been nearly enough to keep the overall shortfall from widening. (The company also curtailed capital investments.) At the end of last year, its pension had $94 billion in obligations but only $63 billion in assets — a funding ratio of 67 percent.

In addition to the “anemic” free cash flow from its industrial businesses, GE’s pension hole and its indebtedness helped subtract roughly $8 a share from its equity value, based on a sum-of-the-parts analysis by Cowen & Co. That’s equal to $70 billion in market capitalization. To put it another way, the discount amounts to eight years of per-share earnings based on 2016 results.

The company has the largest projected benefit obligation of any S&P 500 member and among the top 10, no one has a lower funding ratio.

Because interest rates are still relatively low, it’s possible for GE to borrow money it needs to cover its shortfall. Verizon Communications Inc. and FedEx Corp. sold bonds this year to do just that.

Nobody is suggesting that GE is in imminent danger of defaulting on its pension obligations and many analysts say the company still has years to address the bulk of its shortfall. What’s more, a rising rate environment helps GE winnow its pension deficit by boosting its expected return.

And the longer its pension remains underfunded, the costlier it becomes. The Pension Benefit Guaranty Corp., a government agency that acts as a backstop when plans fail, has more than tripled its rates for companies with funding deficits, and they’re set to rise even more in the next two years.

I fail to see how GE can afford to keep paying a 3+% dividend. But the moment GE lowers the dividend, its share price will likely crater.


GE needs to come up with nearly $5 billion a year for 10 years just to meet pension obligations. That assumes an annualized rate of return of 7.5% a year.

Warning bells are flashing. Returns are far more likely to be zero or negative than anything approaching 7.5%.

The danger of default is real. I suggest likely, even though default isn’t “imminent”.

Pension Time Bomb Explodes In US and Canada