Europe Has A Modest Proposal For Greece: «Don't Pay Wages For One Or Two Months» 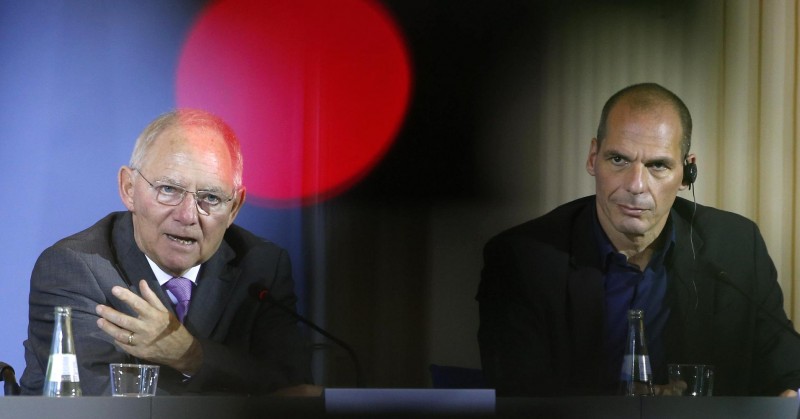 Greece is preparing for another week of hurdles that ends with a ~EU2b repayment on March 20. Most economists say that it will be difficult for Greece to get past end of March without fresh EU funds. Here’s a timeline of the most important events scheduled this week:

Which explains why as we reported yesterday, Greece passed a law to plunder pension funds, one which would allow the government to fully invest reserves of pension funds and other public entities kept in Bank of Greece deposit accounts in Greek sovereign notes.

None of this is news: that Greece will run out of cash absent another check from the Troika, pardon Instituions, pardon creditors, is clear. The only question is what happens after, if Europe indeed leaves Greece hanging.

Today, the Greek media is ablaze with just what Europe's proposed solution to this issue may be. As Protothema and Capital report, the Troika proposed that Athens halt the payment of salaries and pensions for one to two months. This, according to Europe, would promptly tackle the problem of liquidity and find a solution to Greek problem of how to pay back bailout loan tranches to creditors when suffering from liquidity problems.

As Keep Talking Greece reports, the creditors’ proposal was revealed by Varoufakis’ aide Elena Panarity at an event of the Deree College on Thursday and was confirmed by Finance Ministry officials on Friday.

“When we say that we have liquidity problems, they tells us to make no payment of salaries and pensions for one or two months,” Panariti said as quoted by Greek media.

The creditors made this proposal at the side talks the Brussels Group meeting in Brussels on Tuesday.

Panariti did not reveal which one of Greece’s creditors ECB, IMF and EU made this proposal. She is part of the Greek team negotiating with creditors the reforms that Athens has to fulfill in the next months.

In seems that the proposal was made to Finance Minister Yanis Varoufakis who rejected it right away, describing it as “shameful”.

Shameful indeed, but the question remains: where does Greece, which tax revenues continue to suffer, find the cash it needs to fund upcoming payments not just to the IMF but all other creditors?

So to summarize, once again, the peculiar debt payment dynamics in Greece: first the "anti-austerity", "ultra-leftist" government is about to use what little Greek pensions are left, and now - if the Troika has its way - will stop paying government salaries for a month or so, so that Greece can find enough funds to pay the IMF, which then can promptly use the same funds to pay the US muppet government in Kiev which is just as broke as Greece, and needs to pay Gazprom yesterday to keep gas deliveries coming, with Gazprom promptly remitting the funds into Putin's personal money vault.

Meanwhile, Greece, where apathy just hit unseen levels, will end up so poor it can't even afford to conduct the next elections in which, as many have warned, none other than the neo-nazi party may finally take power.