Conrad Black: Why Donald Trump will win big in 2020 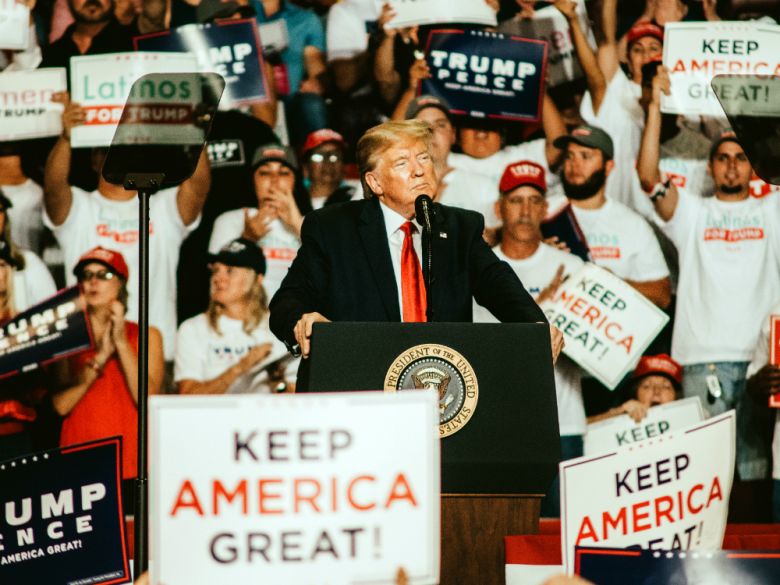 Just as I was pulling my chair up to my desk and preparing to pounce clumsily upon my keyboard and pound out something about the current Canadian election campaign, an email from an old and valued friend popped up enclosing the dumbest column from the Globe and Mail I have seen in 65 years as a frequent reader of that newspaper. By Lawrence Martin, it is entitled: “Donald Trump’s Luck Has Run Out.” I will not engage in another effort to invite Canadian readers to contemplate the fact that just because Trump repels most Canadians as a caricature of a boorish and boastful and loutish American, that does not mean that he is unlikely to be successful. A great many Canadians want the United States, if it doesn’t have a leftish and diffident president like Jimmy Carter or Barack Obama, to have in the White House someone they can disparage like Richard Nixon, Ronald Reagan, or George W. Bush (though Reagan, retroactively, has enjoyed grudging admiration). My problem isn’t what Canadians think of Trump, it is the stupefying purblindness of current Canadian journalistic political comment on the United States.

With only public spiritedness as my motive, and in total impartiality, for these purposes, about American political events and people, I remind readers of a few fundamental facts about the politics of our neighbour. The United States is not really the country of the American Revolutionary mythos. It became an independent country when Benjamin Franklin helped persuade the British to evict the French from Canada in the Seven Years’ War (which was started, in this continent, by an unauthorized attack by 21-year-old adjutant George Washington on the French near what is now Pittsburgh in 1753), and then persuaded the French to help the Americans evict the British from America in 1778. It was never a war for the rights of man, and Americans had no more rights after the Revolution than before, nor more than the British or several other countries, but they were a sovereign country. Unlike almost all other sovereign countries in the late 18th century, they didn’t have a language of their own, but as the opening turn in what has been a durable genius for the spectacle and for matters of image and propaganda, they claimed to be the national cradle of human liberty. America was, indeed, a land of opportunity and comparative absence of class prejudices, but the chief author of the Declaration of Independence (Thomas Jefferson) who held “these truths to be self-evident, that all men are created equal,” was a slave-holder, and the Constitution, when it was promulgated in 1789, entrenched slavery.

A century after the U.S. Civil War, which at the cost of 750,000 dead in a population of 31 million suppressed the southern insurrection and emancipated the slaves, the majority of African-Americans were still segregated and could not vote. The U.S. justice system, though it has had many brilliant legislators, jurists and barristers, is an immense exploitive cartel of lawyers, very many of whom regularly engage in practices that would lead to disbarment in this country (and the Canadian legal system is nothing to write home about either). The U.S. criminal justice system, because of the corruption of the plea bargain system that facilitates the prosecutors’ extortion of perjured inculpatory evidence with impunity, is just an immense kangaroo court. Federal prosecutors win over 95 per cent of their cases, and over 95 per cent of those without a trial, so stacked is the deck. Whenever you hear any American talking about the rule of law or the law of the land or asserting that no one is above the law, it is time to get into your night attire and turn out the lights.

The U.S. criminal justice system, because of the corruption of the plea bargain system that facilitates the prosecutors’ extortion of perjured inculpatory evidence with impunity, is just an immense kangaroo court

Beneath the façade of Norman Rockwell and Walt Disney and most of Hollywood’s production before it was taken over by the limousine left, the United States is a jungle, and that is its strength and its weakness. It assures an immensely competitive Darwinian society in constant fermentation with high levels of achievement in practically every field, but it also causes inordinately large numbers of people to be ground to powder. The land of opportunity is the place where anyone can accomplish almost anything, but there is a threadbare safety net and more than 30 million people live in poverty. It has six to 12 times as many incarcerated people as other large, prosperous democracies, including Canada. And like all jungles, it is run, even if from a little behind the scenes, by the human equivalent of 30-foot constricting snakes and 700-pound cats. Trump’s offence, and his strength, is that he doesn’t make much effort to disguise the fact that he is a fierce, tough and often ruthless alumnus of the very tough schools of American capitalism, entertainment and politics.

The Globe and Mail headline implies that he has ridden his luck to where he is now. In fact, in making billions of dollars in (principally) Manhattan real estate, inventing a television concept and pulling in 25 million viewers every week for 14 seasons, devising a concept of levering celebrity, through being a boxing and wrestling impresario, a tabloid star and a reality TV icon, and then changing party affiliations seven times in 13 years and using social media to end-run the national press, seizing control of one of the great political parties and gaming the electoral system into the White House, he achieved more prior to his inauguration than any of the 43 preceding U.S. presidents except Washington, Jefferson, Madison, Grant, Eisenhower, and possibly Hoover. He is the only person elected president of the U.S. who never sought or held a public office or high military command and only the sixth to win the office with fewer votes than his chief opponent. This wasn’t luck; it was ambitious calculation and flawless execution.

Canadians liked Obama because he was non-white, fluent and suave, leftish and undemanding of “allies.” But GDP growth per capita in the U.S. declined from 4.5 per cent under Reagan to 3.9 per cent under Clinton, to two per cent under George W. Bush, to one per cent under Obama, and the Americans were not going to stand for what they feared (instinctively) would happen next under the Democrats. They were right. With Trump, working and lower-middle class earnings have risen 3.4 per cent annually, average income for female-led, single-parent homes rose 7.6 per cent, defined poverty in such households among African-American and Hispanics fell by 3.5 per cent, and the number of defined poor people declined by over five million. Illegal immigration has been reduced by 60 per cent; oil imports, which were five million barrels a day four years ago, are zero (on a net basis), and in absolute terms, China has ceased to gain in GDP on the United States, and the concept of nuclear non-proliferation has been revived in respect of Iran and North Korea (who swindled Trump’s predecessors). The United States worships success, and practices it, rather than being envious of it. The United States, by the standards of most other advanced countries, is garish and corrupt; it’s not what many Americans and most Canadians want, but it is a democracy and Americans can run their country as they please. There has never in human history been anything like the rise of America from three million colonists to overwhelming pre-eminence in the whole world in two long lifetimes (1783-1945).

Successful American presidents are never Mr. Nice Guy, though it’s a bonus when, like Franklin D. Roosevelt and Ronald Reagan, they act the part. This Ukraine nonsense is a fraudulent desperation shot by the Democrats and will blow up in their faces. Donald Trump is probably the most successful and powerful person in the world and he will steamroller this rag-tag of kooks and retreads desultorily arrayed against him. The U.S. system periodically crushes one of its parties like a waffle. FDR in 1936, Lyndon Johnson in 1964, Richard Nixon in 1972, Ronald Reagan in 1984, all won by over 20 points. The Globe and Mail can dream on like Johnny Cash’s Teenage Queen, but Trump will gain a victory on that scale next year, and like the presidents just mentioned, he will have earned it. Those who resurrect the fortunes of great nations are not groomed and sent out by casting studios, or subject to confirmation by foreign newspapers.